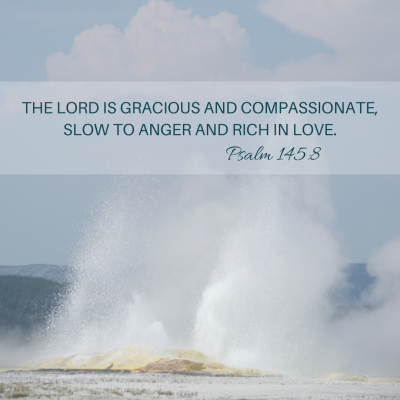 The Lord is gracious and compassionate, slow to anger and rich in love.

At least that’s what the Bible says. But…how often, or how much, do we truly believe that?

A couple of weeks ago, I shared a post about how we can’t let anyone label us with the wrong name, because God calls us “Beloved.” And this week, as we look ahead to Father’s Day, I am thinking the same thing holds true for God. No matter what our concept of “father” might be, we can’t saddle our Heavenly Father with any names that don’t fit.

God labels himself. And thankfully (incredibly, actually), he tells us exactly who he is, so we can know him. And so we don’t get it wrong.

If you really want to dig into who God is (and what that means for our lives), grab a copy of Ruth Myer’s book, Thirty-One Days of Praise (which you can find featured on my bookshelf right now). It’s a resource I turn to, again and again.

Why? Because it is just so darn easy to get things mixed up! Instead of taking God at his word–believing he is who he SAYS that he is–we sometimes put him in a box. We negate his nature. We put limits on his love.

How could he love me, after all that I’ve done?

How could he possibly care about my little problems, when there is so much that is wrong with the world?

How could he ever forgive me for ______ ? (Fill in the blank with whatever it is that you think separates you, or disqualifies you, from God’s love.)

All of which is a bunch of…  I was going to say a word I don’t let my kids say, but I’ll just go with “baloney.” And not only is it baloney, but it is also (buckle up, cuz this part is not pretty) jaw-droppingly arrogant. I mean, who are WE to say what God can or can’t do? He says he loves us. He says he’ll provide. He says he’s got everything under control.

We don’t have to understand all this stuff for it to be true.

So this Father’s Day, as we think about the One who named himself Father, let’s not get things mixed up. Let’s take our cue from the One he named Son, and talk to God the way Jesus did, when he invited us to call him “our” Father. Old-fashioned gal that I am, I kind of love the “hallowed be thy name” lingo that King James trotted out, but I have to say that I’m also pretty pumped about the last few lines of the Lord’s Prayer in the Message. Let’s pray it together:

Our Father in heaven,
Reveal who you are.
Set the world right;
Do what’s best—
as above, so below.
Keep us alive with three square meals.
Keep us forgiven with you and forgiving others.
Keep us safe from ourselves and the Devil.
You’re in charge!
You can do anything you want!
You’re ablaze in beauty!
Yes. Yes. Yes.

P.S. If the idea of a Father who does “what’s best” and who is “ablaze in beauty” feels foreign to you–either because you don’t really know God that way, or maybe because your earthly dad colored your world with a not-great perspective–you’re not alone. For years, I’ve loved getting weekly encouragement via email from Sylvia Gunther, and this week she shared her own painful journey being physically and emotionally abandoned by her father. To read her story–and discover who you really are, as God’s child–click here.