Caroline’s beloved is of Indian descent, and the first ceremony featured a bevy of gorgeous sari-clad guests, traditional Indian dancers, and a spectacular procession (the “baraat”) led by the handsome groom on a majestic white horse. 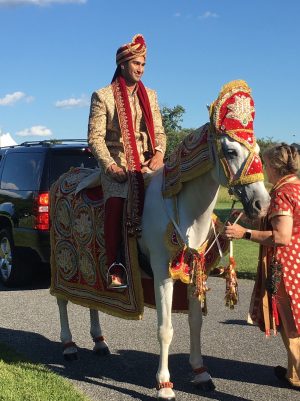 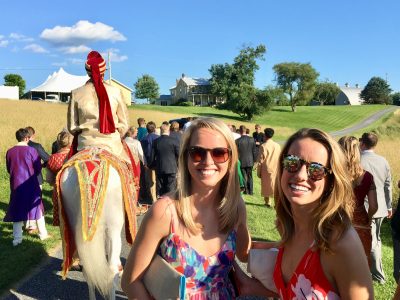 The second wedding, held the very next day, was every bit as glorious as Caroline and Dave double-tied their knot, American-style: 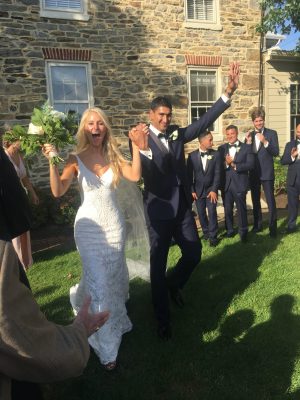 Both nuptials took place on the farm where Robbie grew up (and where we were staying for the weekend). Having married off two of our own daughters in back-to-back weddings three years ago, we knew exactly what our family should do.

Stay out of the way.

Happily for us, the Maryland countryside is crawling with Berndts, and we decamped to Robbie’s sister’s home, where our brother-in-law Noby played host. Noby tells people that he’s in insurance (and I guess he probably is), but I don’t think that’s why God created him. I am pretty sure that God made Noby because the world needs more energy, more excitement, and more contests you can’t stage indoors.

“Camp Noby” has all the stuff you might find in a typical American yard, stuff like bocce ball, corn hole, and ping pong. But Noby has other stuff, too.

Stuff like Blow Darts. And Chinese Death Stars. And a big field with a John Deere tractor designed not so much to mow as to race.

As Noby demonstrated the how-to’s of each successive competition in what turned out to be a decathlon, I felt like I was watching a bizarre farmer’s version of The Hunger Games.

The operative word here being watching. I had no plans to participate in the official events. My best sport (as anyone will tell you) is tanning, and as I lay there by the pool while the rest of the family tried not to kill themselves, I knew I led the pack by at least three shades of bronze.

And then, from just over the hedges, I heard somebody say, “Mom.”

If you’re a mother, you know what that means. Especially during a farm-country decathlon. You get up to see who’s been stabbed.

As it turned out, all the kids wanted was for me to hit something. Having gone to all the trouble of getting out of my lounge chair, I obliged. I picked up the nearest piece of equipment, which happened to be a Bigfoot-sized crossbow.

(Because who doesn’t have at least one of those lying around?)

Noby showed me how to load the thing (if that’s the right term?), and explained all about how to use the scope and the importance of keeping the safety on until I was ready to go. I took it all in, flipped the switch, sighted the target, and pulled.

Nothing happened, so I pulled again.

Still nothing. My arrow sat snug in its groove.

The safety was off, and I could not figure out what the problem could be. Finally, after my third failed attempt, Hillary intervened. “Are you meaning to pull the trigger, Mom? Because that’s not where your finger is.”

Alrighty then. I went back to square one, pulled the darn thing, and came THIS CLOSE to the bull’s eye. Everyone cheered, but the whole experience was more than a little humiliating (and not just because I was wearing a bathing suit to shoot a lethal arrow in front of 12 people, only four of whom actually have my blood in their veins). I realized that, if I ever confronted something–or someone–I had to kill, my only chance would be for them to die laughing. 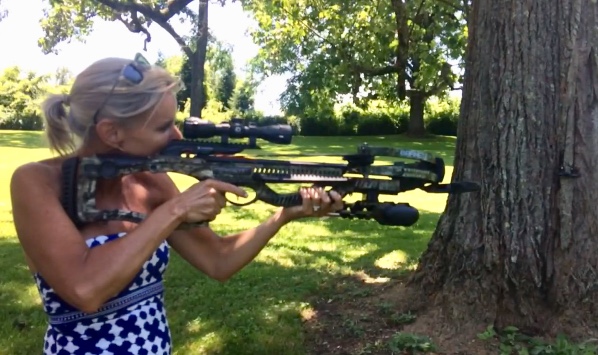 All of which reminded me of an convo I had a few months ago with my friend, A.J. Tata.

“Can you tell,” I asked him, “whether an opponent knows how to handle a weapon? I mean right at first, even before he tries to shoot anything?”

A.J. (“Tony”) is a retired brigadier general, a best-selling author (check out Besieged if you like save-the-world stuff), and a national security expert who’s always popping up on CNN and Fox News. He’s seen his share of bad guys, and I figured he’d know how to size someone up.

“It’s easy,” Tony said, “to tell if an adversary is versed in how to handle a gun. If they are experienced and trained, their grip is firm but relaxed, their eyes are scanning the horizon looking for targets, their movements are fluid and instinctual; rapidly attacking or responding to threats.”

“An untrained marksman is just the opposite. He carries his weapon awkwardly, his hands in the wrong positions on the grip and stock. When the inexperienced shooter aims, it’s jumpy and awkward, as much worried about himself as he is about whatever he might be shooting at. His hesitation leads to mistakes.”

Oh my goodness, people! Tony was talking about how a soldier handles a gun, but he might as well have been pointing at me! Let’s review, shall we?

An untrained marksman is “awkward.” (Check.) His hands are in the “wrong position.” (Double check.) He is “as much worried about himself as he is about whatever he might be shooting at.” (Hello? How much worse would the worried marksman be in a bathing suit???)

Why do I tell you all this? (Why debase myself in this way??)

Because (and I know this blog is already too long, but stay with me) Tony’s assessment APPLIES TO US ALL. Like it or not, we’ve all been given a weapon. Hebrews 4:12 tells us that God’s word is sharper than a double-edged sword, and that we are supposed to use it – both offensively, in shaping our thoughts and our prayers, and defensively, as we counter threats, lies and attacks (even the ones that come from inside our own head):

You’re not up to the job! (Really? Because Philippians 4:13 says I can do all things through Christ who gives me strength.)

That person hurt you. You deserve to cut them off or get some revenge! (Um, no. I’m gonna take the 1 Peter 3:9 approach and repay insults with blessings, cuz that’s what God’s called me to do.)

See what I mean?

The Bible is meant to animate our actions. To shape how we think. To be used in our lives. But if we aren’t comfy with it in our hands (or our heads), it’s not going to work all that well. We’ll be hesitant. We’ll make mistakes. We’ll be awkward.

(We will look, that is to say, much like I did, pulling whatever it was that was not the crossbow trigger.)

(And trust me. That is not a great look.)

But here’s the thing. We don’t have to enlist in some army, or go to the Bible version of Camp Noby, to get ourselves up to speed. God has already equipped us with all that we need. We have the Bible. We have the Holy Spirit (whose job is to translate God’s message into our hearts, and give us the power to use it). And we have each other.

If you’re not in a regular Bible study this summer, consider asking a friend to read part of it with you. My pal Margaret and I are plowing through Acts (we try to talk once a week), and boy is it rich! Reading the Bible with another person is so good: You’ve got someone to bounce questions off, to glean insights from, and even to say, “Did you do your reading this week?”

It’s like having your very own Noby, keeping you pointed toward the goal. And honestly? The more experience we get–the more we dig into Scripture and let it animate our hopes, our prayers, and our dreams–the more our lives will begin to line up with God’s plans. And the more of his bull’s eyes we’ll hit.

Your word is inspired. It teaches us what is true and makes us realize what is wrong in our lives. It corrects us when we are wrong and teaches us to do what is right. (2 Timothy 3:16, NLT)

Give us the training and experience we need to use the Bible–our “sword”–wisely and well.