Note: If your kids aren’t quite ready for college, you might want to check out a couple of posts from the archives. Click here for some tips on hosting a back-to-school prayer party and here for some timeless wisdom from bestselling author Rebekah Lyons and Moms in Prayer president Sally Burke, who talked with me about how we can help our kids when they struggle with worry or fear.

I remember telling my father that I wanted to attend the University of Virginia. The school had recently topped Playboy magazine’s annual catalog of the “best” college party spots, and my dad was understandably concerned. Making matters worse (for me) was the fact that one of his closest friends–a minister–had sent his son to U.Va., and the fella had gotten into all kinds of mischief. “I wouldn’t send my dog to that school,” the minister had warned, and I thought I was doomed.

Two things, though, worked in my favor. The first was the fact that I knew the minister’s son, and he turned out okay. He had graduated, gotten married, and then gone to seminary. God clearly had his hand on that boy’s life, and I figured he could watch out for me too.

The second thing I had was a working knowledge of Scripture and a willingness to use it, even out of context: “‘Where sin abounded,'” I told my father, quoting Romans 5:20, “‘grace did much more abound.’

I won in the end (probably more because U.Va. was the least expensive school on my list than because of the whole sin-and-grace thing) and as it turned out, U.Va. had–and still has–a thriving Christian community. God blessed me with two very smart (and pretty funny) roommates who posted party-relevant SAT words and Bible verses in our apartment foyer (corybantic described “frenzied and unrestrained” dance moves; Proverbs 23 warned of “needless bruises” and other perils of drinking), where anyone who stopped by could read them. Between their friendship and God’s mercy (and despite my making a boatload of stupid decisions), I graduated, got a job, married Robbie, and never thought much about the college party culture again.

Until my own kids grew up.

Could God be trusted to care for my college daughter?

Dropping our eldest, Hillary, off at college–amid a sea of red Solo cups–I had all sorts of questions. Had the party scene gotten worse? Would she be exposed to a lot of drugs? Sexual pressure? Worldviews and social norms that ran counter to the way she’d been raised? And was the same God who had kept both me and the minister’s kid from falling into a spiritual (or physical!) ditch still on the job? Could I trust him to care for my daughter?

Pretty much the only answer I was sure about was that yes, God was still on the job, and that he could be trusted. Suddenly, though, all of the Bible promises about God being “with us” seemed more important than ever. I found myself praying verses like Joshua 1:9 over my girl: Do not let Hillary be afraid or discouraged. Be with her wherever she goes.

I asked God to help her be alert and sober-minded, able to resist the devil and stand firm in the faith. (1 Peter 5:8-9).

And I prayed for wisdom and discernment, so that Hillary would be equipped to demolish arguments and every pretension that sets itself up against the knowledge of God, taking every thought captive and making it obedient to Christ. (2 Corinthians 10:5)

I asked God for all sorts of things–physical health and safety, good friendships, academic success–taking God at his word when he tells us to pray “on all occasions with all kinds of prayers and requests.“ And, when I’d get weary or wonder if my prayers were making a difference, I drew courage from Jesus’ exhortation that we should “always pray and not give up.”

(That last verse, Luke 18:1, is especially helpful when you send a child to college and they don’t call or text you for more than a week.)

Pray with the destination in mind

I think one of the keys to praying effectively “on all occasions” (and to persevering in prayer when everything in you wants to give up) is to be destination oriented, rather that process oriented. We need to leave room for God to move however he chooses. The goal when we pray for our kids–whether we’re sending them off to the first day of preschool or the last year of college–is that they will have a saving relationship with Jesus, one that increasingly informs and animates their thoughts, words, and deeds. 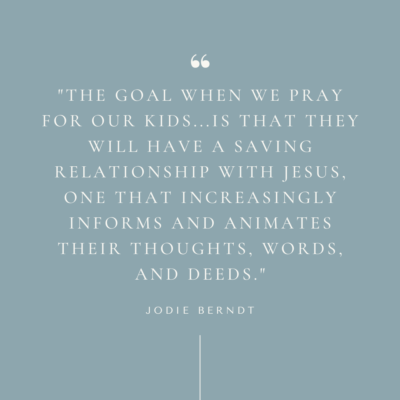 Some of our children will get to God (or get back to God) by walking the straight and narrow; for others, the path may be crooked, painful, and even sometimes dangerous. I talked with one mom who is convinced that God sometimes takes our kids down paths we would not have chosen to keep us from patting ourselves on the back. “We cannot glory-steal from God,” she says. “When our kids come to Christ in a way that only he could have arranged because it looks nothing like we would have hoped for or envisioned, we are much more inclined to give him the credit.”

When you pray for your children in this big-picture way, you trust him to accomplish his best purposes in their lives, no matter how many detours they take, or how many times they may get tripped up along the way. As you pray, though, remember that our kids aren’t the only ones who will face temptation. We will too.

We’ll be tempted to blame ourselves for our kids’ mistakes and second-guess our parenting choices.

We’ll be tempted to live in a world of regrets and “if onlys”, ignoring God’s power (and his desire) to redeem.

And when it looks like nothing is happening and we start to grow weary, we’ll be tempted to give up on the power of prayer.

Let’s stand firm, knowing that our labor in the Lord is never in vain. It doesn’t matter whether the bad choices in life belong to our kids or to us, or how big the sin is. God loves us. And his grace has us covered.

Looking back on my college experience, I still like the idea that “grace abounds even more.” But I looked up Romans 5:20 in The Message, and as I pray my all-grown-up children (and my all-grown-up self) through life’s tempatations and stumbles, I think I like this translation even better:  “When it’s sin versus grace, grace wins hands down.” 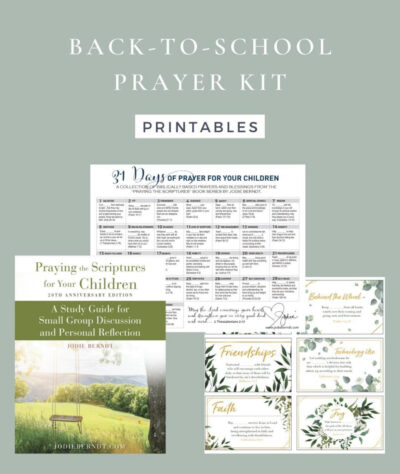 I’ve said it before, but it bears repeating as we send the people we love back to school:  Our prayers release God’s provision. And as we pray, we discover his peace.