Okay, so right off the bat you need to know that this is NOT going to be an inspirational or uplifting post. I have been thinking about how to redeem it, but so far…nada. The only person who could possibly find eternal value in what follows is my pal Michelle, who is convinced that shopping is her spiritual gift, and who proves it with regular Christmas shopping updates from TJ Maxx (where she is one of those people who knows that they really do get new merchandise daily).

Christmas shopping! Can you believe it? I haven’t even finished my second bag of candy corn. Still, I don’t want to get left behind – and I know you don’t want to, either – so as a service to my readers I am currently testing out a Possible Gift Idea. Alert blog followers may recall some past suggestions (The Posture Brace and the Scripture Memory Tool being two holiday favorites), but this one is brand new. I got it last week for my birthday, from Hillary: 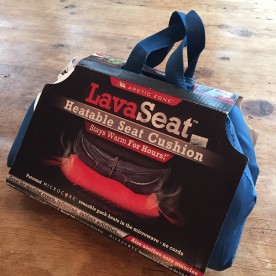 The Lava Seat. The packaging says it’s perfect for “sporting events, tailgating and outdoor activities.” Not having one of those handy today (and not being all that willing to go outside in the cold drizzle, even if a football game did break out in my front yard), I am going to go ahead and run the test in my kitchen.

The first thing they tell you to do is remove the Microcore Pack and pop it into the microwave. They want you to be sure your microwave is clean (which will be a stumbling block to a lot of sports fans right there, cuz of the buffalo wings and all, but whatever). Depending on the wattage of your particular appliance (800 to 1500, which who knows that stuff?), you put it in for anywhere from one to three minutes. I went for two. 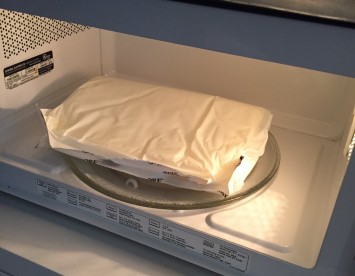 Assuming all goes well (and there’s a whole section about what to do if “swelling” occurs, which I guess is always a concern when you are talking about sports-related mishaps), you flip the Microcore Pack over and repeat the process. Then, because THE PACKAGE WILL BE HOT AFTER YOU MICROWAVE IT!, you are supposed to use an oven mitt to get it out and slide it into the cover. 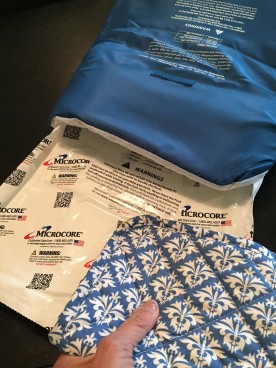 Okay. I don’t mean to be non-athletic, but seriously? The Microcore is a floppy sort of product, and unless you are one of those people who can put on mascara, or maybe diaper a baby, while wearing an oven mitt, you’re gonna have a problem. You can’t shove the pack into the cover without touching the thing. (Which is actually okay, because it isn’t THAT hot. I’m guessing that they have to put in the part about the mitt for that person who sued McDonald’s over the coffee.)

Once you get the core snugged into the cover (which, incidentally, would make an awesome casserole warmer, if you needed one of those), it’s time to sit down.

And they nearly lost me again. There are not a whole lot of products that can instantly make me feel really fat (the wrong kind of white jeans being one notable exception), but trust me:  If you’re concerned about how you’ll look at the next Big Game, you don’t want to be wearing The Lava Seat. See that picture on the package? That’s a two-year-old’s bottom.

Yes! When all is said and done, The Lava Seat performs as advertised. I’ve been working on this blog for nearly two hours (embarrassing, I know), and the casserole cover is still warm. So is my, um, you know. So, while I can’t speak for sports fans, tailgaters, and outdoor enthusiasts (who might not have ready access to a microwave), I can recommend this product for indoor bloggers.

And I’m going to go out on a limb here and say that The Lava Seat just might be what’s truly hot this Christmas.  I googled the top-selling gifts of 2015, and if you’re not into the Apple Watch (remind me why I want that, again?), the new and improved Fitbit (I’m still trying to figure out my old one), or the Despicable Me Fart Blaster (and we wonder why the French don’t like us), you’ll want to get The Lava Seat for everyone on your list.

After all (and if you’ve have hung on this far, you deserve a Bible nugget), you don’t want to be one of those faith-without-deeds people that James warns us about. You don’t want to look at a cold person and say, “I wish you well; keep warm and well fed.” (James 2:16). You want to do something.