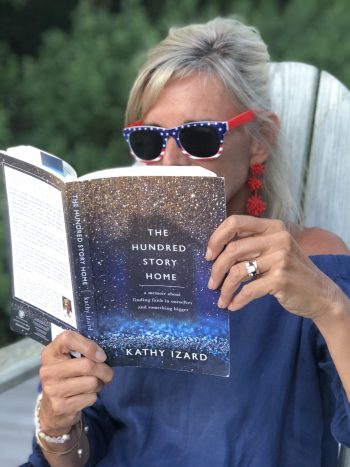 For starters, because I’m a sucker for the 4th of July. I found them at Target in the $1 bin (the sticker promised “100% UV Protection!”), and I’ve been sporting them all week.

But it’s not just patriotism that has me hiding my eyes. It’s vanity.

I’ve just finished reading The Hundred Story Home, and my entire face is a mess. So is my tee shirt (I never have any Kleenex), but the eyes are the worst. I haven’t looked this bad since, I don’t know. Watching Beaches with my wind-beneath-my-wings pal Susan, back in 1988?

Author Kathy Izard starts every chapter in The Hundred Story Home with an inspiring quote. Here’s one of my favs:

We must be willing to get rid of the life we’ve planned, so as to have the life that is waiting for us.

In Kathy’s case, the life she had planned–the life she was actually living–looked pretty sweet. An award-winning graphic designer, she was a happily married mother of four who volunteered in a local soup kitchen. Kathy had been raised to “Do Good,” and she was proud to be making a difference in her community.

But then she met Denver Moore. (You know Denver as the scary homeless guy who makes friends with Greg Kinnear in Same Kind of Different as Me.) Thinking that Denver would appreciate all that she and the other volunteers were doing for the city’s homeless (in addition to serving meals, they offered soccer teams, art classes, and gardening), Kathy took the man on a tour.

But Denver, as it turned out, was less than impressed. In fact, he didn’t say anything–until he’d seen pretty much everything in the building. Then he spoke up.

“Where are the beds?”

Kathy was confused. The soup kitchen didn’t have any beds–it wasn’t that kind of place. Even as Kathy tried to process what Denver was saying–and to explain why they couldn’t house folks overnight–Denver came at her again. Here’s how she tells the story:

“You mean to tell me you do all this good in the day and then lock them out to the bad at night?”

His accusation left me gutted.

Denver patiently allowed me my discomfort. He watched me silently wrestle with my new awareness before he quietly asked me his next question.

Does that make any sense to you?

Of course it made no sense. I was flooded with shame.

Denver’s next question would change the trajectory of my path forever. It was the question I had been waiting for and looking to answer ever since my dad died nine years before.

Are you going to do something about it?

(Kathy writes that she wanted to look over her shoulder to see who, exactly, Denver was talking to. Later, as she drove Denver back to his hotel, she could feel him studying her.)

He kept talking, adding cryptically, “They already know they are coming.”

“Who?” I asked, still reeling from the magnitude of his assignment.

At that moment we arrived at the hotel’s circular drive.

Denver stared at me with utter certainty as he said, “The people who are going to help you–they already know they are coming.”

And with that, Denver opened my car door and walked away.

Wanna know who showed up–or how the story turns out? I hope so, because The Hundred Story Home was just released last month, and it’s already my top pick for the beach bag this summer.

Here’s why I think this book matters:

Kathy knows that not all of her readers will be called to end homelessness, or even just to push it back by a bit. (Honestly though? I don’t think you can come away unchanged from the book, even if all you discover is how to “see” the man on the street as he holds up his sign.)

But even if working to end homelessness isn’t our thing, Kathy maintains that we all have a purpose. We all, she says, have a call, one that’s “patiently waiting and whispering.” We may struggle along the way–and Kathy writes very openly about her own faith questions, her difficult family issues, and her unmet desire for fulfillment–but our whisper (whatever it is) is woven into that journey. And when we hear it, we need to be ready to listen.

And to take a leap of faith into the life–the satisfying, significant life–that might not look anything like what we had planned.