It’s only a week after Thanksgiving, and my social media feeds are blowing up with pictures of people and their Christmas trees. Some were cut (fresh) on a farm. Some were harvested (less fresh) in a parking lot. And some were purchased, pre-lit, with a coupon at Michaels. In every case, the kids look happy, the parents proud, and the trees very much Above Average.

For us, though, not so much. Our Christmas tree is mostly just…big.

And I blame Auburn football.

Because there comes a time, in every fan’s life, when you just need a win. And when your own beloved team manages to rack up a breathtaking total of zero (as in, ZERO) points in the big Thanksgiving Weekend rivalry game, you go to Plan B. You grab your orange-and-blue pom-poms, write “Go Tigers!” on your orange solo cups, and start yelling “War Eagle!”

Which is exactly what we did on Saturday night. It was great fun. Until the Tiger fans stormed the field and Robbie suddenly realized how late it was. We’d spent all our tree-shopping time watching football, cheering for a team we know nothing about. “Everybody in the car!” Robbie commanded. “We have got to go find The Tree!”

Like lemmings, we obeyed. Getting the Christmas tree is a time-honored Berndt Family Thanksgiving Tradition. And, darkness be danged, we were up for it! War Eagle!

What we were less up for was driving all over Virginia Beach, looking for a place that was open. We finally found a lot with the lights on, but it was clear that the tree handlers (who, as they will remind you, WORK ONLY FOR TIPS), were tired. And cold. And probably a little bit tipsy. (They offered us our choice of beer, wine, or whiskey while they looked for their chainsaw.)

Less than ideal shopping conditions, to be sure, but our family is nothing if not doggedly determined to enjoy the Christmas Tree Hunt, no matter how long it might take. We chose the second tree that we saw.

When the guy told us the price, Robbie left. I found out later that he’d gone to an ATM but, not realizing that that was his negotiating strategy, I started to bargain.

“That seems like a lot,” I said. “Haven’t you ever heard of Black Friday?”

“Yes,” the guy said. “But that was yesterday. Yesterday you could have gotten a really good deal.”

(I am not much of a whiskey gal, but I was starting to think that I could be.)

I haggled the guy down by ten bucks, and when Robbie came back with the cash we asked one of the handlers (the one who seemed the most sober) to snap the obligatory family pic. Which will probably become our Christmas card, especially since Geoff (who shopped via Facetime) looks so good: 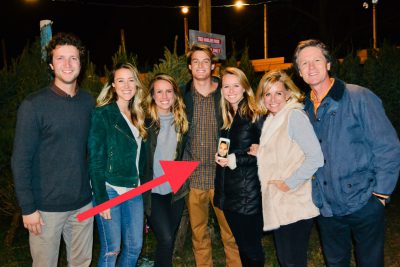 (Next year, I call being Geoff.)

We got the tree home, put it in water, and went to bed.

At first light, Robbie went outside to take a look at our prize. I hadn’t even started the coffee when he returned.

“We must have been drunk.”

I went out to the driveway, still clad in my bathrobe. I could see Robbie’s point. We had not, actually, taken the tree guys up on their refreshments offer, but we might as well have. Because somehow, stone-cold sober and by the light of an iPhone, we had purchased a Beast.

But Robbie is nothing if not doggedly determined to redeem even the most loathsome tree, and he went to work. He got out the measuring tape, the clippers, and the twine. (He planned to tie the thing to the wall, lest it reach out and kill us.) 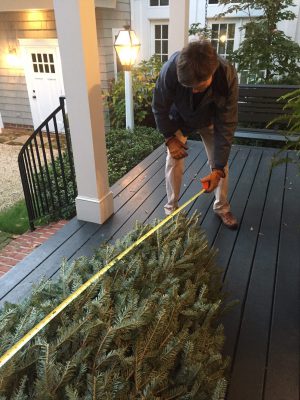 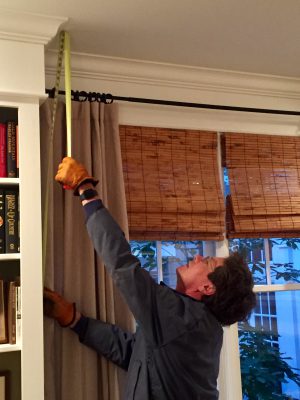 And by golly, Robbie got the Beast up. Before church, even. And I realized (not for the first time) how much I love my man.

Less enamored, though, was I with The Tree. It really did sort of spook me, looming as it did over the sofa. Like if you accidentally turned your back on it, you’d be sorry. But later that day, when the kids finished climbing the bookshelves… 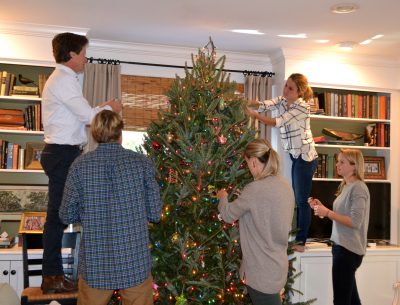 …it looked better. Less threatening, somehow. And when somebody pulled out my favorite ornament and strapped it on The Tree’s belly, I knew it would all be okay.

Because if you have to have a honker piece of nature camping out in your family room for six weeks, you want it to say something good. Something uplifting. Something that’s bigger and more powerful than even the most ogre-like tree. 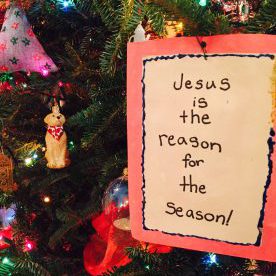 (And to all my U.Va. friends, please don’t judge me. I promise that, if you squint hard enough, the Tigers kind of look like our guys. #Wahoowa.)