Not only is Hillary’s big day on Saturday (whoop!), but Robbie and I celebrated 30 years of our own bliss on Monday. I posted this shot on Instagram, both to mark our anniversary and because who needs pricey wedding calligraphy when your mom is such a whiz with yellow spray paint? Pinterest people, eat your heart out: 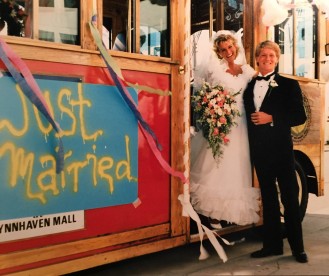 In preparation for her impending nuptials, Hillary has been wending her way through Tim Keller’s book, The Meaning of Marriage. It’s a great read. And a sobering one; anyone who thinks marriage is all about finding happiness need look no further than the subtitle – Facing the Complexities of Commitment with the Wisdom of God – to know that Keller isn’t peddling a fairy tale.

But Hillary isn’t the only Berndt brushing up on her marital literacy. I’ve been reading a how-to book of my own. It’s called The Good Wife Guide and, while this book may not be as widely read in evangelical circles, let me assure you that it is every bit as challenging as Keller’s work. 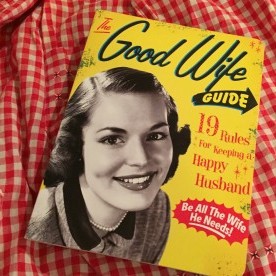 The Good Wife Guide starts off with a no-nonsense observation:  “A man’s home is his castle and as such, he ought to be treated like a king.” Lest there be any doubt as to what, exactly, that means, there’s this:  “It’s every wife’s responsibility to dote upon her hard-working spouse, to show that he is truly appreciated!” 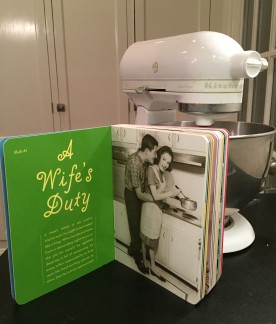 And then, assuming that the reader is hooked (because who wouldn’t be?), the book features 18 more must-do’s for keeping a happy husband:

Rule #12:  Follow His Lead. (“If, instead of hanging on your every word, he mumbles one-word responses to your questions while perusing the newspaper…don’t take it personally.”)

Rule #16:  Sing His Praises. (“Tell him he cuts a fine figure…or marvel at his business acumen when he relays a story from the office.”)

And, my personal favorite, Rule # 6:  Greet him with a smile. (“With just one glance at your face, your husband should know that his very presence marks the pinnacle of your day.”) 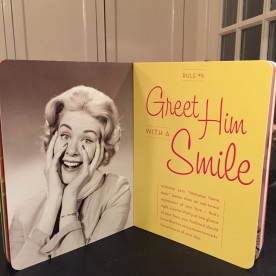 Shocking as it sounds, I will confess that it didn’t take me three decades to break every one of the Good Wife rules. It didn’t even take me three weeks. Heck, I’m not even sure I was a good wife for three days. Maybe. (But that was on our honeymoon, so I doubt if that part counts.)

The rules are hard. But you know what? I really like them! I think most of em make sense. I know I don’t have that exciting of a life, so maybe this isn’t saying much, but when Robbie comes home at night it really is the pinnacle of my day. So why do I show him where the dog dug up the grass, or ate the driveway rocks, or barfed on the sisal? Why don’t I smile?

I know The Good Wife was written as a retro-fun gag (its counsel comes straight out of the Ladies’ Homemaker Monthly, a popular magazine from the early 1900s). But, at least in terms of the sentiment that lies behind the rules, the marital advice could have been written way earlier.

Way earlier, as in the first century. As in, when Paul was writing his letter to the Philippians, which has a lot of terrific advice for relationships. Here are a few gems from that how-to:

Do nothing out of selfish ambition or vain conceit, but in humility consider others better than yourselves.

Let your gentleness be evident to all.

Do everything without complaining or arguing.

If I were writing a marriage book, I think I’d just rip off Philippians. Follow Paul’s advice – like his secret to being content both when you have plenty and when you are in need, or his idea of taking your troubles to God instead of worrying about them – and presto! Problems solved, right?

Actually, I wouldn’t steal from Philippians. (I mean, that one’s a best-seller every year; why mess with perfection?) And even more actually, I wouldn’t write a book about marriage, because Keller already did that (with his wife, actually), and theirs is pretty darn good. But, based on the success of The Good Wife Guide, I’m thinking that some sort of manual for the guys might be in order.

The Good Man Guide. Maybe, since guys like to watch TV (it doesn’t seem to matter what’s on; I once found Robbie watching a test pattern), it should be a video series.  Rule #1 could be, “If I have a problem, don’t try to fix it.  Just listen.”

Because, as every gal would tell you (and if you’ve seen this one before, it’s worth a re-watch), it’s not about the nail.