It’s been a minute, I know. And I’ve missed you. So I’m sliding into your inbox today with a quick personal update, a few scripture prayers, and DIY idea you can try for a marriage you love.

But first, a little backstory.

Last summer, I asked you to let me know what topics you’d like to see covered in a book about marriage. You weighed in with some very specific answers. You wanted principles and prayers you could use for better communication, handling conflict, and knowing how to deal with parents and in-laws. You wondered about intimacy—both the physical and the spiritual kind, particularly where you and your spouse might not be in the same place, faith-wise. And at least one of you asked if I could please write something–anything–that would get your husband to do what you wanted him to do. 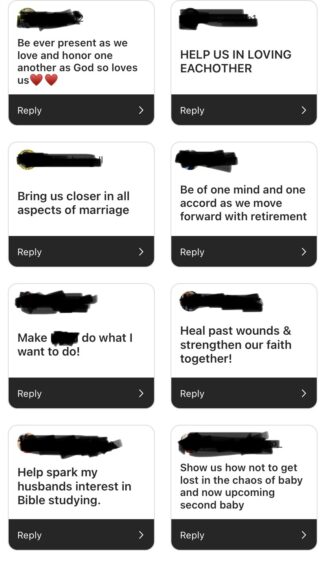 I put all of these things in the pondering pot and went poking around in the Bible to see what God had to say. I came away convinced that God is crazy about marriage, and that his deepest desire is to equip us to love one another as he loves us: selflessly, lavishly, and in ways that go beyond anything we could ever ask for or imagine.

I also interviewed oodles of people. I talked with everyone: Newlyweds and empty-nesters. Folks who’d spent years on the struggle bus and those for whom the “for better” eclipsed the “for worse.” Couples who were comfortable talking to God–trusting him with their most important relationship–and those who had no idea where to begin.

And then I went into a writing hole. I basically stayed in my bathrobe for a few months, poking my head out of my office just long enough to ask Robbie to read something and give me his feedback. Which was both helpful and hard. Robbie is nothing if not honest. And even though he sent me back to the drawing board more times than a husband who wants to eat dinner “sometime tonight” should ever do, his comments were thoughtful and wise (especially when it came to tricky topics like handling money, experiencing forgiveness, and having good sex).

When it was all said and done, we hit “send” on the manuscript a scant three minutes before it was due. I thought we should celebrate by going to bed (like, to bed-bed. For a month.), but Robbie said it was time for a toast. 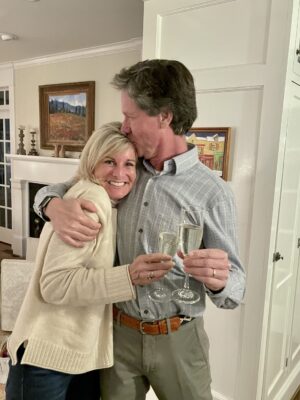 And honestly? There were plenty of times during the process when I questioned God. Who was I–who were we–to write this book? Would it be any good? And would we have any friends when we finished, since I’d spent such a long time in the hole? Writing is lonely. Writers are lonely. It’s a privilege, to be sure, but if your heart’s desire is to write a book, you need to know, up front, that your social life may take a hit.

(And, if you are like me, you’ll probably gain at least seven pounds in the process.)

The book–cleverly titled Praying the Scriptures for Your Marriage–releases next spring (just in time for wedding season!). I’ll be giving you little sneak peeks between now and then, including excerpts from interviews with folks who’ve done the marriage thing well, folks who’ve navigated the “for better” together, as well as some hard seasons of “worse.”

For now, though, I’ll leave you with three of my favorite marriage prayers–verses you can personalize for yourself, for a friend’s marriage, or even for your unmarried children as you pray for their relationship with their eventual spouse.

Make us kind and compassionate to one another, and quick to forgive. (Ephesians 4:32)

In humility, may we value one another above ourselves, not looking to our own interests but to each other’s interests and well-being. (Philippians 2:3-4)

May our marriage be rooted and built up in Jesus. Strengthen our faith and cause us to overflow with thankfulness. (Colossians 2:6-7)

I put these prayers on a card we gave all the guests last summer at Virginia and Christopher’s wedding. 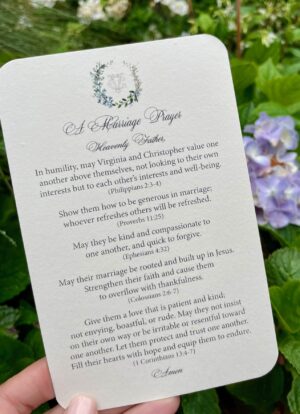 And okay, so it’s not technically a “DIY” project–not unless you’re way better than I am at graphic design. But any local printer (thank you, Virginia Beach Printing!) can help you make your own card, personalizing it with a monogram or a cross or any emblem you like at the top. This makes a sweet party favor at a wedding shower or bridal luncheon, or slip the card into a frame as a gift for a couple you love. Happy wedding season–and happy almost anniversary, Virginia and Chris!