Our son Robbie graduated from college in May. 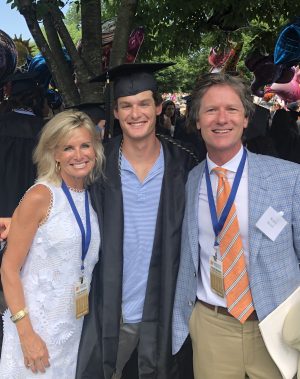 Watching him walk down U.Va.’s storied Lawn, my mind flashed back 20 years to my brother David’s graduation (also from Virginia): 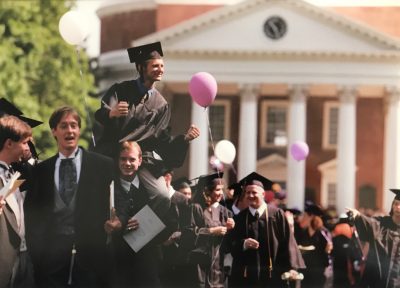 That’s David, perched on somebody’s shoulders. I guess he was trying to spot our folks in the crowd, because the moment he saw them, he scrambled down, threaded his way through the procession, and planted a kiss on Dad’s cheek in a very public display of gratitude and affection!

A few days later I received a letter from my father describing David’s impromptu embrace and telling me how much it had meant. Dad went on to recount about a dozen similar memories and blessings from his children’s growing-up years, pointing out that they were all “a testimony of God’s tender mercies, one after another after another, being bestowed upon our family.”

My father’s note made an impression on me, so much so that I actually wrote about it – and quoted him – in the last chapter of Praying the Scriptures for Your Children. “God is so faithful,” he said, “and we must remember to stop occasionally and build ‘an altar of thanksgiving’ before we hurry on our way.” 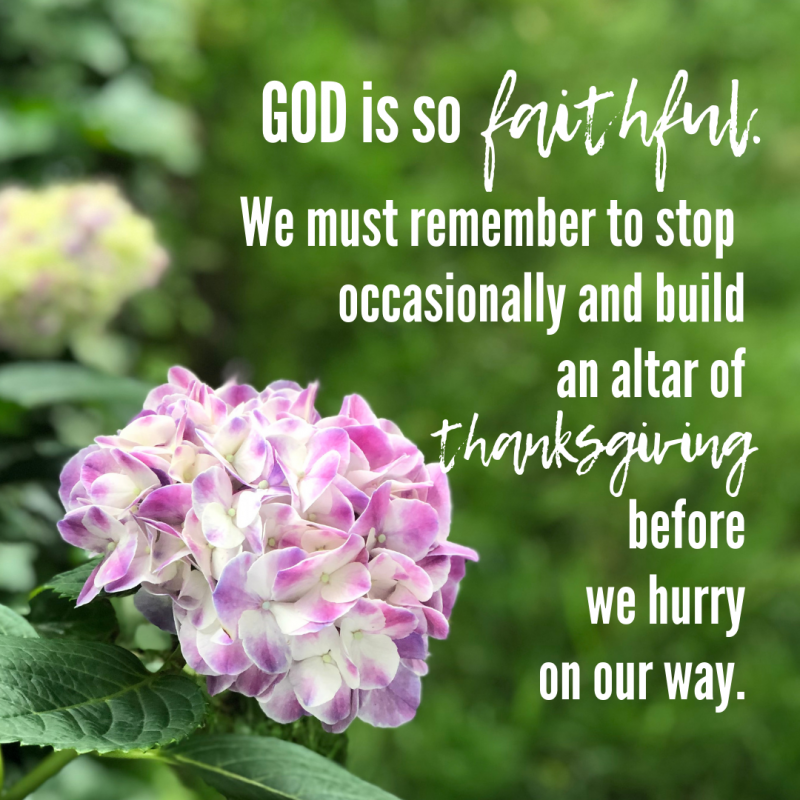 I knew what Dad meant. The Bible is brimming with stories of altars built by those who wanted a lasting memorial of who God was and what he had done. Noah built an altar after the great flood; Jacob erected one after God changed his name; Moses put one up after God gave the Israelites an incredible  victory over a powerful foe. In each of these instances—and plenty more—the altar signified the time and place where God showed up and proved his faithfulness, his power, and his love.

I don’t know about you, but I am not nearly as good at building altars as I am at building to-do lists (even in my prayer journal), thinking of all the things I want God to accomplish in my life and in the lives of the people I love. Rather than thanking God for “his tender mercies, one after another,” I often find myself consumed with present concerns, unmet desires, and problems that have yet to be solved.

Which is where summertime can bring some welcome relief.

Even though our family is long past the annual “School’s Out!” shout on the calendar, the season still heralds a slower pace, one that offers an opportunity for rest and reflection. For meditating on God’s goodness. For altar-building.

So what does an altar of thanksgiving look like?

In Bible times, an altar was often a pile of stones set up by someone so that they (and their children, some who were yet to be born) would have a visible reminder of God’s provision and his faithfulness. I actually have a couple of stones – and one or two seashells – on which I’ve written dates and a few words or a Bible verse that speak to what God has done.

More often, though, my “altar” is simply a page or two in my journal, one where I revisit prayers (which sometimes look more like scrawls) from the previous months and thank God for how he has moved, often in ways I did not expect. With the perspective of time, I can see how God has expanded my vision, stretched my faith, and said no to some of my longings so as to make room for his.

(I realize that this might sound sort of heady. But don’t get any ideas. My journal is not fancy. It’s got arrows and abbreviations and chicken-scratch writing that I sometimes struggle to read. But I tell myself that the Bible altars were probably no architectural masterpieces either. I imagine that, to someone who did not know their meaning, they mostly just looked like…rocks.)

If the idea of building an altar is a new one for you, I want to encourage you (even as I am prompting myself) to try it this summer. Not only is altar-building  an exercise in gratitude, it’s also one of obedience:  “Tell God your needs,” the Bible says, “and don’t forget to thank him for his answers.”

Write a few words on a rock. Or in a prayer journal. Or, if you’ve got children at home, consider building a basket-shaped altar. Encourage your kids to be alert to the ways they see God at work in their lives, and to note those observations on a slip of paper (chicken scratch is approved!) and slip it into the basket. Then, before school starts again in the fall, set aside an evening to read what’s in the basket together.

Because trust me. Ice cream, served up with a side of thanksgiving, can be a very tangible reminder of God’s love. 😊 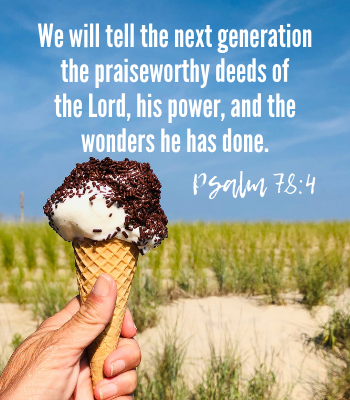 Help us never forget the things our eyes have seen you do; do not let them fade from our hearts. Equip us to teach your faithfulness to our children, and to their children after them. (Deuteronomy 4:9)

I am not the biggest Podcast Gal. Alert readers will remember when I did my first one, with a hip young mom who podcasted (?) out of her family room. We’d been talking for 15 minutes when I asked when we’d start recording. “Oh we’ve been recording this whole time,” she said. “We love it when our shows feel organic and natural!”

Organic and natural. At my age, we don’t do much of that stuff. My crowd tends to go in for things like hair dye and Botox. I have one friend who can’t go out of town for more than two weeks, for fear of missing her scheduled maintenance. “It takes a lot of time and money,” she says, “to look this natural.”

Relic that I am, I do actually tune in (if that’s the right word) to a few of my favs, one of which is a show called The God-Centered Mom. It’s hosted by Heather MacFadyen, who has four strapping young boys. (Which might explain why she barricades herself in a room once a week and interviews interesting guests about all sorts of fascinating topics. I think I would too. If I knew how.)

This week, Heather’s guest was an author I love, Andy Crouch. 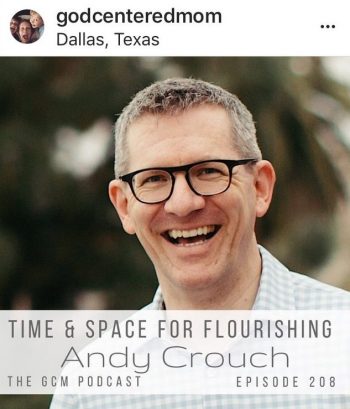 Andy has written a slew of good books, including one called The Tech-Wise Family: Everyday Steps for Putting Technology in Its Proper Place. He talked about how to do that–how to live in a techno-based world, without letting devices control our thoughts, our time, or our relationships. To listen to the podcast, click here…and in the meantime, I’ll give you the Cliff Notes.

Andy is big on pulling the plug. He’s not anti-technology; he’s just into “active-engagement”–as in, things that captivate our kids (and us) in ways that go beyond screen time. When we look back on the “best moments” of our family’s life, nobody is going to say “It was when I got to Level 16” on Fortnite, or whatever. Instead, Andy says, it will be those times when we were really “present” for each other. When we were engaged.

Which, for a lot of us, might demand a willingness to burn through the boredom. As in, not immediately strapping on earbuds (airbuds? airpods?), or binging on Netflix to fill the space in our lives. “All creativity,” Andy maintains, “is on the other side of boredom.”

Andy and his family take a two week vacation every summer and completely unplug. For those who find that prospect daunting (hello, Berndt fam?), he gives the okay to start smaller. Even just one hour sans screens–no TV, phones, computers–can make a big difference. Chez Crouch, they even douse the lights during dinner and dine by candlelight.

(Which is a practice, BTW, that I am a huge fan of. Who needs Botox when a good power outage will do?)

But here’s the thing about ditching devices. The first third of any new endeavor, Andy says, is often the rough part. Get through that–get through the first 5 days of your two-week techno-vacation, or the first 20 minutes of your techno-free hour–and the lightbulb (or more aptly, the candle) ignites. Things get creative. Things get engaged. Things get fun.

We didn’t even have screens when our kids were young (unless you count one big box TV), but when it came to any sort of “mandatory fun,” the burn-in time was still real. Most of the stuff I’d suggest was not greeted with cheers, but once we hit our stride, we were hooked. Or at least most of us were.

If you want to start small–with, say, just an hour or two of actually Being With People (!) this summer–here are a few active-engagement tactics we’ve tried:

I’m sure you have other ideas; post a comment if you’ve got one to share. And P.S., Andy’s pointers are not just for kids. There’s a whole section in the podcast devoted to grown-ups, and how our technology obsession can negatively impact our world. Want to sleep better, fall more in love with your spouse, or wake up without being greeted by email, first thing?

Get the screens out of your bedroom.

(But not, of course, before you download The God-Centered Mom.)