Well I’ve moved into Romans. It’s not my favorite book of the Bible, mostly because it contains a lot of heady stuff and you have Paul writing things like, “I do not understand what I do. For what I want to do I do not do, but what I hate I do…What I do is not the good I want to do; no, the evil I do not want to do – this I keep on doing.”

But anyway, here I am, and if you’re with me on the two-year Bible reading plan, maybe you’re here too.  And maybe you found yourself breezing right on through the second half of Romans 1 this week like I did, thinking it wasn’t really for you. An easy assumption to make. I mean, Paul basically opens with a whole section about God’s wrath, starting out with warnings about general wickedness before transitioning into big-ticket items like idolatry and sexual perversion. (Interesting that he lumps “disobedience to your parents” in with murder, depravity, deceit, and ruthlessness…but that’s a blog for another day. Or maybe it’s a verse you want to write out and put on your kid’s pillow tonight.)

So, there I was, skimming along through Paul’s litany of sin (and feeling pretty good since I wasn’t one of “those perverts”) when – kind of like what I imagine it must feel like to get hit in the head with a hammer (which has never happened to me) or with a soccer ball while you watched your kid’s game (which has) – a verse practically jumped up and bit me. Romans 1:21 says, Although they knew God, they neither glorified him as God nor gave thanks to him, but their thinking became futile and their foolish hearts were darkened.

I know God, but how many times have I failed to give him the credit or glory he deserves? How often have I neglected to thank him for what he is doing (or what he has already done)? And how easy it has been, during those times, to slip into futile thinking:

This circumstance will never change.

And where is God, anyway?

I’ve lost count of the times thoughts like these have pitched their tents in my head. And each time they do, I can almost feel my heart grow a little darker.

Hold that thought because, on a happier note (thank goodness!), today is 8/28.  I’ve paid attention to this date for years, ever since my friend Lisa (whose birthday it is) told me that she loved her birthday, since it always reminded her of Romans 8:28.

If you know only one line from the whole book of Romans, chances are it’s that one: And we know that in all things God works for the good of those who love him, who have been called according to his purpose. People love Romans 8:28. And it’s easy to see why. Who wouldn’t want to stake their hope in the fact that, regardless of how bad things might look right now, God is at work, and his plan is to make everything turn out for our good?

Lisa believes that. Coming from her, it’s a belief that carries some solid weight, ‘cuz it’s born of experience, as well as faith. Three years ago, Lisa was a 48-year-old marathon runner and a successful attorney who racked up the victories on the pavement and in the courtroom. She was also a loving wife and the mother of two almost-grown boys. And then the stroke happened.

It was massive, and what followed was a horrific brain bleed that had doctors bracing her family for the worst. But if Romans 8:28 was ever going to be proved true in Lisa’s life, the time was then, and God did a miracle. Against all odds, Lisa lived. And against all odds (and after an incredibly challenging journey that has involved all of the stuff you hope never, ever happens to someone you love), she walked into her own birthday party this year. 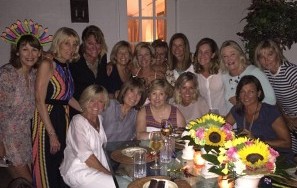 And it was quite a celebration. Not in the way you might think – there were no balloons or dancing cows or whatever it is that people feel like they need nowadays. It was just a handful of Lisa’s friends, gathered on someone’s screened porch for a casual supper, talking and laughing the way that girls do. And, during the course of conversation, Lisa made a profound admission:

“I try to find one thing each day to be thankful for,” she said. “I think about that thing, and I thank God.”

Wow. Romans 1:21 wasn’t even on Lisa’s radar, but in that one simple statement, she gave me hope. She turned the equation inside out, offering the antidote to a darkened heart. It’s gratitude, and a readiness to shine the spotlight on God. When we acknowledge his provision – living out verses like Romans 8:28, trusting in his power and his love even when we can’t see how he will work – the futile thoughts don’t have a chance to take root. And even if it’s just one thing to be thankful for each day, it’s a start.

So thank you, Lisa. Thank you for being a woman of faith, for reorienting my perspective, and for giving me a reason to be grateful (even for the tricky parts in Romans). Happy birthday! 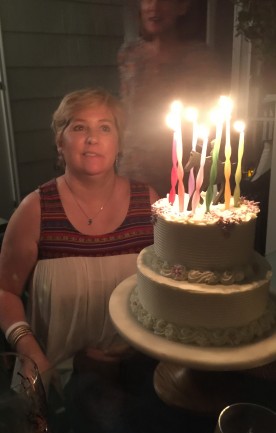 Note:  If you’re wondering where the Friday prayer is, check back next week. For now, why not borrow Lisa’s birthday verse for yourself, or for someone you love? Here’s Romans 8:28, in the form of a prayer:
Heavenly Father, thank you that you have promised to work in all things for the good of those who love you, who are called according to your purpose. Help me believe that today, and fill my heart with hope.  Amen.