There’s nothing like having a house full of recent college graduates to upgrade the family fun. They know all of the best games and – as promised – here’s a quick “how to” on one that we played during our Staycation last month. I imagine it’s known by many names, but we called the game “Salad Bowl.” 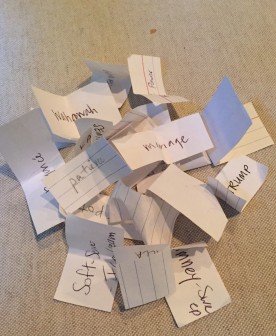 For starters, divide your group into two teams. Give everyone three slips of paper and have them write down one or two words on each. Almost any noun will do; our collection included patience (as in the virtue), Lawless (as in the movie), and Donald Trump (as in). Once everyone has written their words, fold em up and put them all in a – you guessed it – salad bowl.

(Note:  When picking your words, it helps to be a little bit crafty or off-beat. I learned this lesson the hard way when I picked Sewanee. That’s where Robbie goes to school, and since he would be leaving the following week, I guess I was already missing him. It’s a good school, but a bad word choice, since Round One involves giving verbal clues so your team. All anyone had to say was, “Robbie’s college!” and they got it. Lame.)

So for Round One, everyone gets 30 seconds to pull words out of the bowl and try to explain them to their teammates, using any verbal clues you want. (Think “Catch Phrase,” without the beeping.) You go through all the words, alternating teams every 30 seconds, until all the words have been guessed.

Tally how many words each team got, record that score, and then put all the words back in the bowl.

Round two is a little trickier.  You still alternate the guesses in 30-second intervals, getting as many words as you can in that time, but instead of giving long-winded clues or explanations about the word (“This is what happens when you have to wait for a really long time for something to happen…”) you pick just ONE WORD as a prompt. For instance, if you were trying to get your team to guess the word patience, you might simply say, “Virtue.”

(Since everyone is already somewhat familiar with the words, it’s not as random as it sounds.)

(Unless you are old like I am, in which case you don’t remember any of the words from Round One and you just sit there shouting out whatever occurs.) 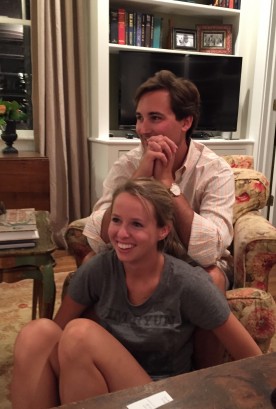 Go through all of the words again, giving the one-word clues, until they’ve all been picked.  Tally how many each team got, add that to the Round One score, and put the words back in the bowl.

Round Three is basically charades. You go through all the words again, with each player having 30 seconds to get his teammates to guess as many as they can. (Talented actors may want to tighten the interval to 20 seconds.)  This is where the game can get interesting: Donald Trump was easy (the hair); patience less so. I stood there, doing nothing, expecting people to guess the word. I mean, they were waiting, right? Hello? Patience?

(Maybe I just had a bad team.)

Anyhow, you can end the game after Round Three, awarding the win to whichever team guessed the most words right after all three rounds. Or, you can move on to Round Four and add the sheet.

We recommend the sheet.

With the sheet in play, you put all of the words back into the bowl and pass it to a team member who is – you guessed it again – under a bed sheet.  The person goes through as many words as possible, acting out the motions under the sheet. No words or encouraging noises allowed. No discouraging noises, either. 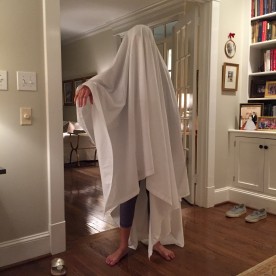 (My team got “patience” this time. Nothing like doing nothing to garner the “best actor” award, when you’re under a sheet. And I am pretty sure we won, by a margin of one.)

So…that’s Salad Bowl. It’s a game for all ages, as evidenced by the York family of Atlanta, Georgia. Special thanks to Kelly York for cluing us in to the world of possibilities that can open up in Round Four after her 82-year-old grandmother went under the sheet during their family vacay and pretended to be “Obama.”