Every family, I guess, has its own lexicon.

Several years ago, I curated a few favorite Berndt sayings (things like Paddle hard, Eat the ugly frog first, and Keep chocolate handy) and painted them on a “Family Rules” board. 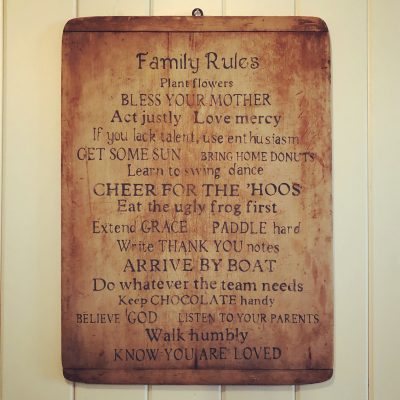 Paddle Hard is a take-off on Colossians 3:23, which served as a theme verse for our staycation one year.

And that bit about Chocolate? That’s just basic survival, to us.

I love this old board, but there is one rule–one good family rule–that I forgot to include.

Hit the ball back.

Hit the ball back began with our son, who views much of life through the lens of athletics.

As a preschooler, Robbie learned math. It wasn’t on purpose; we just parked him in front of the television (fourth child) and asked questions like, “How many points does U.Va. need to score in the next minute if we are going to beat Carolina?”

As a fourth-grader, Robbie sometimes forgot to turn in his assignments–until we explained that homework worked exactly like basketball:  It didn’t actually count unless you “sunk it” in the teacher’s basket.

And then one day, another dad offered to drive Robbie to lacrosse camp. I knew the fellas would be in the car for awhile, and I wanted Robbie’s conversation to sparkle. Trouble was, he had three older sisters, which meant we didn’t actually know whether our boy could talk.

It was time for some pregame coaching.

“When Mr. McKee asks you a question,” I said, “don’t just answer with a yes or a no. Pretend that whatever he says is a tennis serve, and return it. Give him something that he can hit back.”

I don’t know how the ride went (Robbie thought it was great, but then again, he thought he got all his SAT-Math questions right), but Hit the ball back became a family staple that day.

Years later, after our children were grown, I realized that nobody hit the ball back better than Jesus. Whether He served the ball or returned it, the Lord always invited folks to come play.

“How many loaves do you have?” Jesus asked, when the disciples wondered where they could find food for 4,000 people.

“Who do people say the Son of Man is?” Jesus wondered, sparking a dialogue that led to Peter’s confession:  “You are the Christ, the Son of the living God.”

“What do you want me to do for you?” Jesus asked a blind beggar, the one who refused to stop shouting. “Rabbi,” the man replied, “I want to see.”

Jesus, of course, knew the answers. He knew how much bread was on hand, that He was God’s Son, and that the blind man wanted to see.

So…why all the questions? What was Jesus trying to do?

Jesus could have just blurted stuff out (“I am GOD!“), or healed people as He wandered by. Athletically speaking, though, that would be like Roger Federer, playing tennis with me. Federer could serve (or return) the ball 24 times, and the set would be over. And at the end of the match, I would never have moved from the baseline, my game would be unimproved, and–worst of all–I would not know a single thing about my amazing opponent (other than what I already did, from TV).

But that’s not what God wants for our lives.

Which only happens when we engage.

Jesus didn’t question the disciples for His sake (again, He already knew all the answers), but for theirs. He wanted to draw them into connection, to the place where their lives could be changed. And He still wants to do that today.

What do you have?

Just as the disciples offered their loaves, we can give God our resources and talents (meager as they might be), trusting Him to use them to satisfy many.

Who do you say that I am?

That was Christ’s question to Peter, and He asks the same thing to us. Either He’s God, or He isn’t. What do you say?

What do you want me to do?

This last question might be my favorite, because it’s God’s invitation to pray. The blind man probably figured that his need was obvious. When prompted, though, he made his request anyway. Let’s be like him. Let’s not shrink back. Let’s put our needs out there, knowing that we’ve been invited, and let’s hit the ball back when God serves.

Oh, that we might know the Lord!
Let us press on to know him.
He will respond to us as surely as the arrival of dawn
or the coming of rains in early spring. (Hosea 6:3 NLT)

Thank You for Your promise to respond.