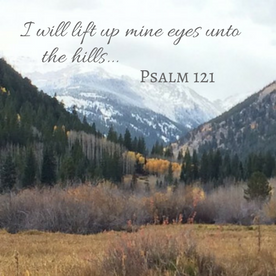 Okay y’all. I promise this is the last one. No more of Mark Forsyth‘s literary tricks, after today. But when I saw pleonasm used in one of the Psalms of Ascent, I just had to give it to you in the form of a Friday Prayer.

Pleonasm, Forsyth explains, is “the use of unneeded words that are superfluous and unnecessary in a sentence that doesn’t require them.” Familiar phrases such as added bonus, personal friend, and safe haven are all examples of this belt-and-suspenders technique. They are linguistic time wasters. Why would anyone bother to fall down when a simple fall would have the same effect?

Psalm 121 opens with a couple of back-to-back (see what I did there?) pleonasms:  I lift up mine eyes unto the hills, from whence cometh my help. Not only do we not need the word “up,” Forsyth says, but since “whence” literally means from where, throwing in the extra “from” is enough to make some people fly into a furious rage. (Because I guess a regular rage, minus the pleonasm, just doesn’t sound angry enough.)

I’ll give you the whence (and so will most modern Bible translators, who have swapped it for where), but I actually think we need the word up. Pleonasm is not always a bad thing and, when it serves to emphasize a point (“I saw it with my own two eyes!”), I think it works. And in this case, I love the fact that the psalmist doesn’t just want to level our downcast gaze, he wants to make sure we look up.

In the end, though, none of that really matters. What matters is that God stands ready to guard, protect, keep, and watch over us. If you want to read the whole psalm, click here. But if all you have time for today is an abbreviated version in the form of a prayer (and you don’t mind little pleonasm thrown in), here you go:

Lift up my eyes today. Let me see you as the source of my help…watch over my coming and going, both now and forevermore. (Psalm 121) 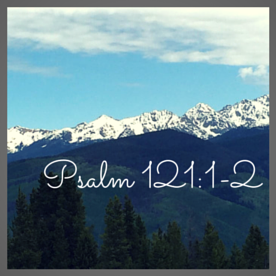 Seems like almost everyone I know needs help right about now.  I know I do – a combo of sickness and a too-busy schedule have knocked me down (and, for those who pay attention to these things, left me blog-less this week).

I don’t know what your need is – comfort, strength, a job, wisdom, healing – but I know God is the source.  Let’s borrow a prayer from Psalm 121 this week and trust him to provide:

Lift my eyes to the mountains of your strength.  Help me, Lord, according to your promise, for you are the Maker of heaven and earth.  (Psalm 121:1-2) 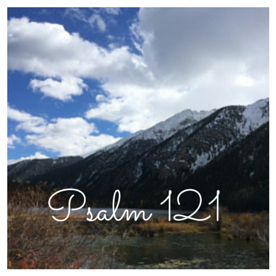 Psalm 121 is the passage my mom asked us to learn this year (a Scripture verse, and going to the Messiah sing-along, is what she wants for Christmas every year).  With less than a week to go, I think my family might have a better shot at memorizing the Hallelujah Chorus than nailing the whole psalm, but we are trying.  And I gotta hand it to her; Mom picked a good one.  In addition to being just plain majestic, Psalm 121 is chock full of powerful prayer promises.

If you (or someone you love) could use an extra measure of help, strength, or protection, Psalm 121 has you covered.  Try praying the whole thing, or just use the last two verses: