When Hurricane Matthew visited Virginia Beach two weeks ago, he left us without power for five days. That in itself wasn’t so bad (I am a big fan of candlelight), but he also knocked out our phone, cable, and Internet access (hence the lack of blogposts) until yesterday. Truth be told, I didn’t really miss those things, either (especially not when you consider what the people in Haiti have been through, or even our water-logged friends just over the border in North Carolina).

What was a bit tricky – and this was a first, in my hurricane history – was the fact that a forest of downed trees and power lines meant that Robbie and I (along with a handful of neighbors) we were basically trapped in our darkened houses for the better part of a week. This pic doesn’t show the full carnage, but you can see why getting a car out would have been kind of iffy: 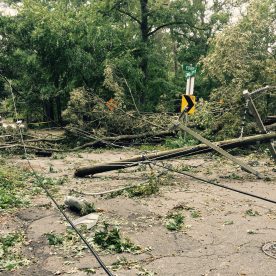 When people realized our plight (and it was hard not to:  Firemen, police, the local news, and even the National Guard showed up on our corner to check things out), we began getting all sorts of offers. Did we need coffee? The loan of a car, if we could reach it? Would it help if people just threw food and flashlights over the power lines?

We said we were fine (and we pretty much were), but then Robbie went down to check on the basement. Most Virginia Beach houses don’t have ’em, but our place was built during Prohibition and it came with both a basement and what was left of a still. Because I guess, back then, there were fewer hurricanes and more thirsty people.

The water was rising. We had a pump, but no way to power it. The very cute generator we had purchased after the last big storm had benched itself, after just a few hours of playing time. Should we, I wondered, try bailing? It sounds so romantic and adventurous in books. Robbie was less than enthused, and eyeing the flight of steps and our bucket, I had to agree: As a basement app, bailing is sort of meh.

We were stumped. But then Along Came Gary. 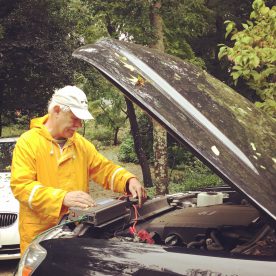 Gary Cole is the sort of man you want in your daughter’s father-in-law. We got him as part of the package when Annesley married Geoff, and the minute he heard about our situation, Gary picked his way through the trees (keeping an eye on the still-popping power lines) with a black box that he called an “inverter.” Being an English major and all, I immediately deduced that an inverter is something that changes a direct current into an alternating current so that you can use the engine in your Toyota to get the water out of your basement. Obviously. 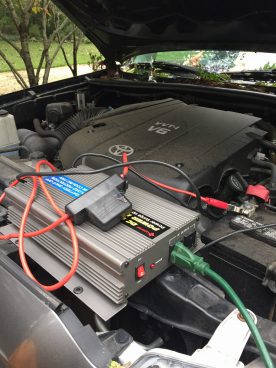 Gary’s contraption made short work of our water problem. Most guys would have popped a Bud and given themselves a high five at that point, but not Gary. For one thing, he’s a milk-and-cookies guy. And for another, he’s thorough. He stood back and looked at our whole house, in all of it’s food-spoiling glory. No generator? No problem. Gary said he knew a guy. And the next thing I knew, Gary and The Guy had hauled The Guy’s generator through the trees and into our driveway. 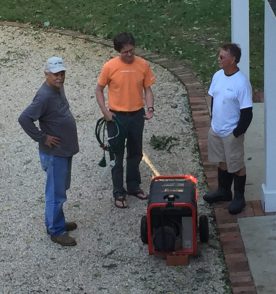 All I could think, as I looked out the window, was how these men (and all of our other friends and neighbors who banded together to help one another) were living out verses like Philippians 2:4 (“Do not merely look out for your own personal interests, but also for the interests of others”), Galatians 6:10 (“Therefore, as we have opportunity, let us to good to all people”), and Matthew 22:39 (“Love your neighbor as yourself”).

I wouldn’t wish a hurricane on anybody. They can be nasty things. But having been through a boatload of them (smallish ones, anyway), I must say that those storm clouds can have a silver lining. In bringing our normal, busy, self-centered lives to a halt, they make us stop and notice each other. And in a world that feels increasingly adversarial and selfish, it was really nice to see these verses about looking out for one another come to life – and to realize afresh what love does.

And, since I didn’t get to post a Friday Prayer last week, I’ll tap into the (a-hem) power of one of the letters that the Apostle John wrote, toward the end of his life. Let’s make these simple words both a prayer and a resolution for our lives: