I have a friend whose grandmother, upon being told that one of her grandsons was going to take his honeymoon before he got married, summed up her analysis with this:  “People vary.”

Over the years, I’ve used that phrase to account for any number of differences in taste and style. I was reminded of the maxim this week when a pal who raises chickens graced me with a sample of her harvest. Chicken-cooping does not appeal to me, but…people vary. And for that, I am grateful. 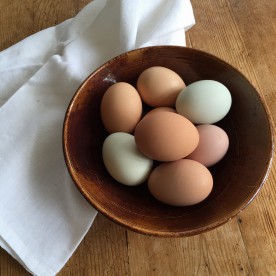 The Apostle Paul certainly knew that we’d vary – and he encouraged us to recognize and affirm those differences. “The body,” he wrote, “is not made up of one part but of many.” Paul said that the foot shouldn’t feel inferior or excluded because it is not a hand, and that the ear shouldn’t be bummed because it isn’t an eye. “God has arranged the parts of the body, every one of them, just as he wanted them to be.” (1 Corinthians 12:18)

As you consider the way God has made you today, don’t be jealous of someone else’s attributes or abilities. Instead, stop and think about the unique gifts he has given to you, and how you might use those things to strengthen, equip, and encourage other people. Not everyone has what it takes to raise chickens, but for those who do, it’s gotta make God happy when they share their eggs.

Which brings us to our Friday prayer (which you can pray for yourself, or for someone you love):

Help me to use whatever gift I have received to serve others. Let me be a faithful steward of your grace in its various forms. (1 Peter 4:10)