Last week, a friend summed up the reason for the Las Vegas shooting (and pretty much every other awful thing). “These things happen,” she said, “because the world is evil. And until people recognize that–until they realize that the only answer is Jesus–they will never know peace.”

I had to agree. I was less worked up than my friend (we’d been running, and she was pretty sweaty about it), but I realized that she was totally right. Nobody is good. “We all,” Isaiah 53:6 says, “have gone astray.” And we’d all be doomed, except for the second part of that verse: “…and the Lord has laid on him the iniquity of us all.”

Which brings me, in a roundabout sort of way, to Garden Club.

If you’ve ever been in a garden club, you know it’s the sort of group that attracts Very Capable women. Women who get things done. Women who, had they been aboard the Titanic, would have had duct tape stashed in their purse.

The Virginia Beach Garden Club has about 60 of these gals. And every year, we put on our aprons and get together to raise a boatload of money for veterans’ gardens, children’s hospital spaces, environmental education and conservation efforts, and all manner of community beautification projects. 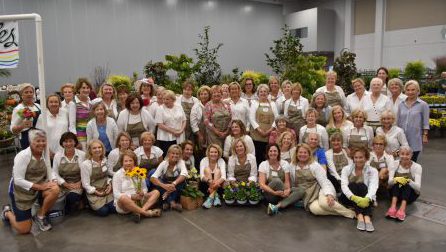 Except when they aren’t.

Which happens, sometimes. Like when a customer orders Delta True Blue pansies and decides, when she comes to pick them up, that she really wants Delta Blue with Blotch. (The drama.)

Or when someone who is not “authorized” tries to put her hands in the order form box. That’s not cool. 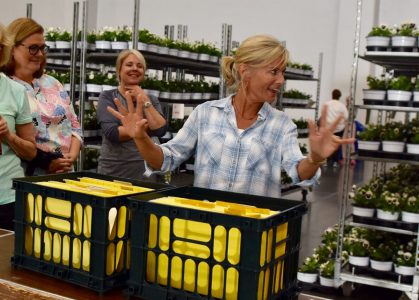 Or (and this is the stuff of garden club nightmares) when we run out of flowers.

Which is what happened this year.

Due to an accounting error (which would, ah, be mine), we came up ten flats short. Of Delta Pure Orange. Which, in case you don’t know, is a great-looking pansy: 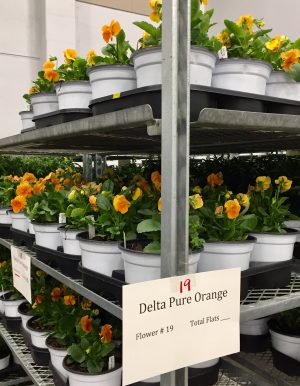 We had customers waiting to pick up their orders – their orders of Delta Pure Orange – but we had run out. There was not an orange blossom in sight. Fortunately, I remembered seeing ten flats of the coveted flower outside of the sale, in the place where we’d stashed 115 flats for the City to plant.

(And if you think you are bored right now, please. I lived this.)

“Come on,” I said to my co-chair, Latané. “Let’s grab those orange pansies outside.”

And we did. We grabbed a giant metal rack, dashed out to the parking lot, and loaded ‘er up. We thought we were safe. But no. Somebody’s husband was watching. It was just like I used to tell my kids, when I’d quote Numbers 32:23. “You may be sure your sin will find you out.”

The guy texted his wife: 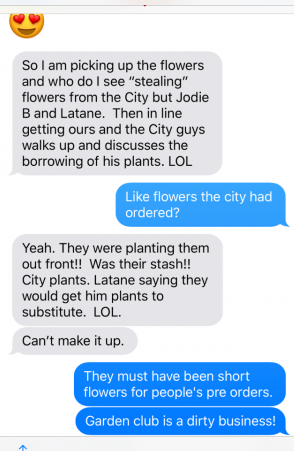 The thing is, though, I was not, technically, stealing the pansies. I had a plan to replace them. And I was just about to get on the phone to our supplier to order up ten more flats of Pure Orange when I heard a commotion on the other side of the pansy cart. I poked my head around the flowers just in time to see the guy from the City rip into my friend Dee (who, in addition to being a long-time member of the Garden Club, also happens to be the subject of our book The Undertaker’s Wife).

Having spent half her life in the funeral business, Dee is not scared of much. Normally, she has an answer for everything. But as she stood there, getting positively clobbered by a very big man who’d been robbed of his pansies, I could see she was shaken.

“I–” she began. “I don’t know anything about your missing pansies.”

Dee’s profession of innocence did nothing to curb the man’s ire. He went on. “I want my pansies! I want the pansies I ordered! None of this funny business, okay?”

Now, at this point you are probably wondering why I did not step in to rescue my friend. I was about to, but you know how sometimes things unfold in slow motion? Yeah. All I could think, as I watched the assault, was how much Dee was looking like Jesus. She had done nothing wrong (she is, in fact, a garden club member in very good standing) and yet here she was, paying the price for my sin.

It was like watching the entire gospel message unfold in less than 30 seconds, amid a backdrop of flowers.

You’ll be glad to know that I finally stepped in and ‘fessed up, calmed the guy down, and got his flowers replaced. Pansy crisis, averted.

But the whole thing got me thinking. Nobody stepped in for Jesus. He absorbed all of our sin, every last bit, so that we could be free. And he did it so that our hearts (which are so naturally bad) would have the chance to be good.

And in that act, he gave us the answer for evil. The only answer. And every single time somebody turns toward him, the darkness gets pushed a little more back.

Evil will lose, eventually. “No longer,” it says in Revelation 22:3, “will there be any curse.” And in the meantime, we can take heart.

As in, a new heart. “I will give you a new heart,” God promises, “and put a new spirit in you; I will remove from you your heart of stone and give you a heart of flesh.” (Ezekiel 36:26)

Swapping True Blue pansies for Blue with Blotch won’t change anyone’s life. It won’t push back the darkness, or deliver us from evil.

But swapping our heart for the one that God gives us most certainly will. 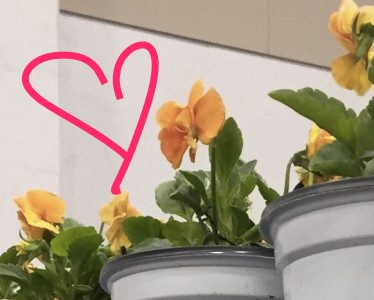