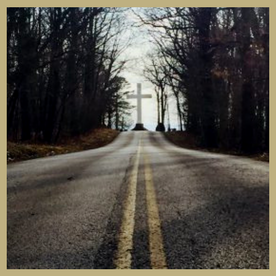 Holy Week. The week before Easter. The week when Jesus knew that “the time had come for him to leave this world” (John 13:1), and that the road ahead – the road to the cross – would be filled with unspeakable pain. What was he thinking?

Do you ever wonder about that?

Being fully God, Jesus knew exactly what was about to happen. He’d be insulted, rejected, and abandoned – both by the Jewish leaders (many of whom believed in him but who were too scared to admit it, since they “loved praise from men more than praise from God”) and by his closest friends. (John 12:42)

He would suffer indescribable torment. The press of the thorns…the sting of the whip…the pain of the nails…the struggle to breathe.

And he would know the heartache of watching his mother watch him die – and of being unable, in that moment, to wipe the tears from her eyes.

So what was he thinking, on the road to the cross?

I can’t begin to imagine, but Scripture gives us some clues. Jesus says that his heart is “troubled” and that the idea of backing out has at least presented itself. He confides in his friends, telling them that he is “overwhelmed with sorrow to the point of death.” And he prays, asking God if there is any way to take a pass…but then, ultimately, choosing God’s will over his own. (John 12:27, Matthew 26:38, Matthew 26:39)

Clearly, the road wasn’t easy. It was agonizing. So how did he do it? How did he – being fully man – get past the fear and the worry and the sorrow that stood in his path?

Here again, the Bible offers some answers. Reading through the gospels and Paul’s letters, we see a man inspired by obedience, trust, humility, and love. And, in addition to these internal motivators, Hebrews 12:2 reveals an external driver: Future joy. “Let us fix our eyes on Jesus,” the writer says, “who for the joy set before him endured the cross…”

I’ve combed through the commentaries looking to flesh out, exactly, what that joy was. It seems like, for Jesus, the joy came in three parts:

The first is the idea of a mission accomplished. His teaching was revolutionary and his miracles amazing, but Jesus knew that the whole point of his life was the cross (“It was,” he says in John 12:27, “for this reason I came to this hour”). Fulfilling his purpose – the job that aligned with God’s master plan – gave him joy.

The second reason was the resurrection. Jesus knew (because he was God, and because of prophecies like the one in Psalm 16:9-11) that he would come out of the tomb alive, and that his experience would open the door to the everlasting joy of God’s presence – not just for himself, but for all who would call on his name.

Jesus wanted to be able to bring us to God. We are the reason he endured the cross. We are, I believe, what he was thinking about, as he made his way up that hill.

And this Holy Week, this Easter, I want us to think about that, too. Because we are God’s beloved – not just in the future, but right here and right now.