We lived in Atlanta in 1995, back when the Braves won the World Series. It was a heady time for the city, with tomahawks hanging from telephone poles and kids wearing Maddux jerseys to school, but the whole thing was pretty much wasted on me. I don’t understand baseball.

Never, perhaps, was that more evident than when I got drafted to coach.

We had just moved to southern California, where it seemed like everyone played Little League. When in Rome and all that, I enrolled all four of our kids. Robbie and Virginia were 5 and 6 at the time, and they got assigned to the same tee-ball team. 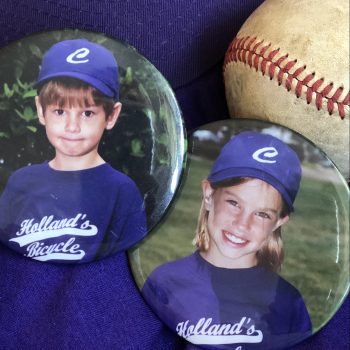 As a mom, I felt like I’d done well by my kids. They’d make new friends, get some fresh air, and learn all about a sport than none of their ancestors (lacrosse players on their dad’s side; book-readers on mine) had ever played. All was well—until my telephone rang.

“We need coaches,” the voice said.

My husband was out (he traveled for work) but I didn’t want our family to seem unhelpful. “I can’t coach,” I said brightly, “but I can sew the team banner!”

I tried another tack. “I can handle the roster? The snacks? Be the Team Mom?”

“Listen, Mrs. Berndt,” the voice said. “We have too many players. Unless we can find some more coaches, your kids can’t play. We need you.”

This was not headed anywhere good. “You don’t need me,” I countered. “I can’t catch or throw. My baseball knowledge is zero. And…I’m afraid of the ball.”

“No worries. We’ll train you. The coaches’ meeting is Wednesday—see you then.”

Never mind that “training” consisted of opening the equipment locker so that the coaches—15 dads and myself—could grab stuff. Or that my tee (the only one left in the locker) wouldn’t stand up all the way straight. I threw the thing in the back of my car, along with a bucket of balls and a couple of bats that the dads didn’t want, and practice started the following week.

Our jerseys were purple, and the first order of business was to choose a team name.

“The Purple Wolves!” one kid hollered. “Yeah!” said the others. “Alrighty then!” I agreed. “That’s excellent progress! Our next job is—” (and here’s where I found myself wishing I’d paid better attention to how the Braves did it) “—to make up a team cheer!”

We worked on that one for a while, trying out different wolf poses and howls, and then it was (mercifully) time for practice to end. I sent the kids home with instructions to “work on their wolf stance” and told them I’d see them at Saturday’s game.

Game Day dawned with no small amount of enthusiasm. I’d found a big old beach blanket so my team wouldn’t have to sit on the grass, and I’d packed what I thought was a strong lineup of snacks. At first, the Purple Wolves seemed pretty happy.

But then they looked across the field.

I followed his gaze. The other team wasn’t seated just yet, but you could tell where they’d be. Every single one of the 14 spots in the opposing lineup was clearly marked on the ground by a carpet sample. A carpet sample! And on top of each tidy square sat a matching red water bottle, with a little baseball stopper on top.

“We’re gonna get killed!” a wolf moaned. A few others agreed. And fear spread through my team like wildfire.

Now, if you know anything about tee-ball (and if you don’t, consider us friends), you know that nobody keeps score. You cannot lose. And you definitely cannot get killed.

But try telling that to a bunch of kindergartners whose parents are stacked, three-deep, in lawn chairs on the sidelines. My Wolves had come ready to play…and yet they were already feeling defeated.

They had fallen prey to The Comparison Trap.

And we do the very same thing.

We can’t help it. We look across the fields of our lives and see moms whose kids make better grades. Or dads who have better jobs. Or neighbors whose lawns have no weeds. Or whatever. And we assume that their lives are all squared-away and amazing, and that ours—at least by comparison—aren’t.

One of the best pieces of parenting advice somebody gave me when our kids were little (and this is a nugget that works for marriages, jobs, and everything else) was this: “Don’t compare your family’s insides to somebody else’s outsides.”

It’s true. Anybody can look like they have their stuff all together, like they are leading a carpet-square life. But if there’s one thing I’ve learned from interviewing hundreds of moms and dads over the years (and from our own family’s up-and-down life), it’s that everyone—even the Varsity Christians with the award-winning children and the primo jobs and the clean minivan—has issues. Nobody measures up. Nobody even comes close.

And if we spend our time looking at other people’s outsides instead of focusing on Jesus (and basking in his immeasurable love for our insides), we’ll be doomed. The comparison trap will feast on our joy and eat us alive.

As it turned out, the Purple Wolves won that first game. Or maybe they lost. I don’t remember. The only thing I remember–the only thing ANYBODY remembers (and people remind me of it, to this day)—is the fight that broke out on the mound.

No, the Carpet Squares didn’t attack. The brawl (which got ugly fast) was an inner-squad thing, between the Purple Wolves’ pitcher and our first baseman, after the latter got hit in the chest with a throw because his attention was elsewhere.

(Did I mention where I’d positioned Virginia and Robbie? No? Okay well. Never mind then.)

Help us understand who we are and the work we’ve been given, and to sink ourselves into that. Don’t let us fall prey to comparison; rather, equip us to do the creative best we can with our lives, secure in the lavishness of your love. (Galatians 6:4, MSG & 1 John 3:1, NIV)