Two things this week have me camping out on the fatherhood of God and his dogged–relentless, even–pursuit of our hearts.

The first thing was the inauguration of U.Va.’s 9th president, Jim Ryan. 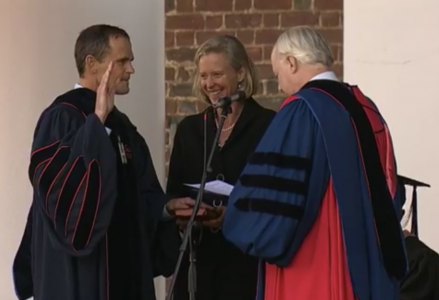 (And I know, I know. Some of you are like, “U.Va. again? Why does she always write about that?” To which I would say:  Hello? Did I write even ONE WORD about our victory over nationally ranked Miami, or last week’s road win at Duke? Feels to me like a U.Va. shout out is a bit overdue.)

In his inaugural address (which was fabulous; if you missed it, click here), Ryan likened teaching to parenting. He noted that both endeavors were based on the faith that the job–despite being a sometimes messy process with unfinished and imperfect results–was worth doing, and that as both a parent and as a university president, he would “never give up on the people I love.” 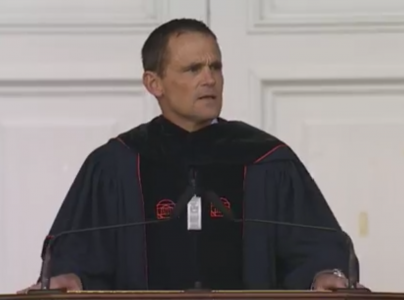 Which brings me to the second thing.

The second thing that happened this week was that I started reading Genesis.

You know the story. God makes Adam and Eve. And then they eat the fruit that they shouldn’t. And when they realize what they’ve done, they get scared and try to hide from God in the garden.

God knows, of course, that his kids are over there in the trees. And when he says, “Where are you?” (Gen. 3:9), he isn’t really after their physical location. He is asking where they are, spiritually–as in, where Adam and Eve are in relation to him.

I read that line and, as a parent, I thought back to the times when I felt like my own children were hidden. The times when they felt far away. Emotionally distant. Out of reach (even if they were just across the table, at dinner). The times when I watched them pursue relationships or activities or ideas that, I knew, would not produce good things in their lives.

The times when family life felt a little bit messy.

And then I thought about God, and how he must sometimes feel the same way towards us. Over and over again in the Bible (just as over and over again now), God’s children go wandering off, turning their backs on his love. And we see what God does in response.

Sometimes, we see his desire:  How often I have longed to gather your children together, as a hen gathers her chicks under her wings, and you were not willing. (Matthew 23:37)

Other times, we see his promise: My people are determined to turn from me…my compassion is aroused…I will roar; they will come…I will settle them in their homes. (Hosea 11:7-11)

Always, though, we see his pursuit. From the “Where are you?” Genesis question all the way to the “I stand at the door and knock” of Revelation 3:20, we see God calling to us. Wooing us. Inviting us into a life marked by purpose, passion, and joy.

And demonstrating, always and forever, that he will never give up on the people he loves.

So…that’s why President Ryan’s speech, taken together with the Genesis story, made me think about God. With one major difference.

Ryan’s presidency, like our parenting, can’t help but yield (as he freely noted) imperfect and unfinished results. But it’s different with God. With God at the helm, we can be confident that, having begun a good work in our lives, he can be counted on to complete it.

He will get the job done, and the results will one day be perfect.

(Which, even though this is NOT a U.Va. blog, is a promise that I would dearly love to see fulfilled on the field, as we take on the Tarheels tomorrow…)

Thank you for being the embodiment of love. You are patient and kind; you keep no record of wrongs. You protect, you hope, you persevere.

Let us never grow weary in doing good, especially to the people we love. And when we feel downcast or discouraged, remind us that you know just how we feel, and that there is a promised harvest, at the perfect time, for those who never give up. (Galatians 6:9)