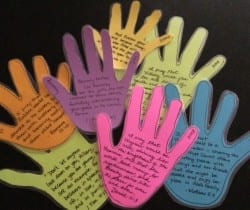 I’ve already told you that I am not a good shopper (the posture brace featured in Tuesday’s blog is just one in a long line of epic fails), but I’ve found at least one gift that’s pretty much always a winner, whether it’s for my kids, my husband, or anyone else.

Think about it.  Unlike the “My Size” Barbie we gave Annesley one year (whose main selling point seemed to be the ability to “share” her clothes, and whose allure dropped considerably once they came off), prayer is a gift that lasts.  And not only that, but because it taps into the power of a God who is both loving and strong, prayer has the ability to open the door to wisdom and favor, to provide blessings and protection, and to shape and influence lives.  What parent wouldn’t want that for her kids?

One of my favorite ways to pray for my children (or for anyone) is to use Scripture–the actual words and promises you find in the Bible. I do this fairly regularly on an as-needed basis (Ephesians 4:29, which swaps out “ugly talk” for words that bless and help other people, became like a mantra when our kids were young), but each December, I try to ramp it up a notch.  I spend some time thinking about each one of my kids, considering where they are–emotionally, physically, spiritually–and what their deepest needs might be.  I ask God to give me a glimpse of what he wants to do in their lives, and then I find a verse that I can pray throughout the new year.

When Virginia was in the first grade, for example, she had plenty of boldness.  What she lacked–as evidenced by her willingness to tell other youngsters who didn’t believe in Jesus that they were “going to hell”–was tact.  And sensitivity.  And probably a few other things.  I didn’t think God wanted to dampen her evangelistic spirit, but I figured we’d all be better off if he would temper it with a little grace.  I found a perfect prayer tucked into Daniel 12:3: 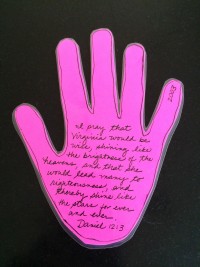 I pray that Virginia would be wise, shining like the brightness of the heavens, and that she would lead many to righteousness, and thereby shine like the stars for ever and ever.

Then I did what I always do:  I traced her hand on a piece of colored paper, wrote the verse on it, dated it, and took it to Kinkos to get it laminated so that it could live on the refrigerator for a year, both as a reminder to me to pray and a sign to Virginia that God was working in her life.

I don’t want to get all mushy in a blog, but I stand in awe of the way God used that simple prayer to shape a little girl’s life, growing her into a young woman who loves the Lord and who longs to make him known.  She can still be–as her grandfather used to put it–“seldom right, but never in doubt,” but even when she gets her facts mixed up, one thing is certain:  Virginia cares deeply for other people–and thanks to God’s grace, she has learned to love wisely and well.

God has breathed similar blessings into the lives of all of my kids, working in response to the prayers that he prompted.  I no longer post their laminated hands on the refrigerator–they are all young adults, and to be honest, laminated hands look kind of creepy once you get out of elementary school–but I still make them.  And every year, on January 1, I show them to the kids.  It’s pretty cool, because even though all the Christmas presents have been unwrapped (and, if they were from me, most likely returned or exchanged), the kids know that there is still one gift–one good gift–that will grow and bear fruit all year long.