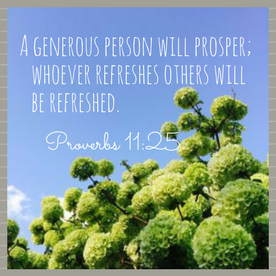 Well, hello there Spring! It’s refreshing to have you back!

I love what the Bible says about refreshment: In a nutshell, we get what we give. So let’s look for ways to pour our time and talents into other people’s lives, sharing our resources to revive even the weariest heart. Let’s make this our Friday Prayer:

Help me be alert to opportunities to exercise generosity. Let me refresh other people and, in turn, may I be refreshed. (Proverbs 11:25)

Can watching football improve your marriage?

Last January, I wrote a post about Generosity and Marriage, and how even the simplest act of giving – like making your spouse a cup of coffee in the morning – can be a huge factor in your marital happiness.

But what about football? Can going to the big game with your spouse (or even watching it on TV) bode well for a relationship? Based on three things that happened this past weekend, I would answer that one with a definite Yes. 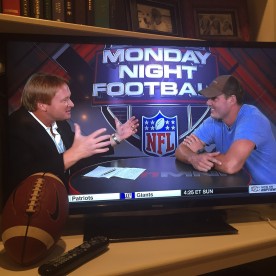 First, I saw a car commercial where this cute girl picks up a guy for a date. En route, she discusses the strengths of their team’s rushing offense while using the rear-view mirror to apply eye black. When they finally reach their destination – a stadium – the guy is speechless. It’s the date of his dreams: a pretty girl, talking sports, taking him to a football game! Do I remember what sort of car she was driving? Not at all. But I will never forget the guy’s face in the passenger seat. He was soooo happy.

The second thing that happened was that my pal Anne Ferrell, who is married to the Alex Trebek of sports (Bob can name just about every college mascot in the country, from the UC Santa Cruz Banana Slugs to the Fighting Pickles of UNC’s School of the Arts), told me that she doing a “30-Day Challenge” to soak up as much football intel as she can. Players, coaches, weekend highlights – they’re all on her list. (If you could have heard her discussing Navy’s triple option offense on Saturday, you would know what a dedicated student she is.) Needless to say, Bob (who played for Navy and still holds like 17 records) is thrilled.

And the third thing – the third football thing in 48 hours that made me think that the sport has clear implications for romantic relationships – was a text I received from my girlfriend, Dee, who got married last summer: 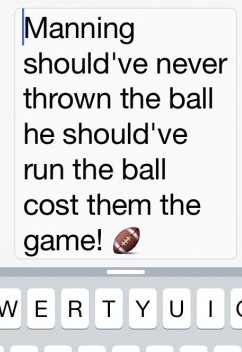 Now, Dee is not big on punctuation. I knew that. But she’s also not big on football – or at least, I didn’t think she was. Ask her what the Real Housewives are up to, or what fell out of the closet during the most recent episode of Hoarders, and her eyes fairly dance; when it comes to reality shows, she’s a curator. But televised sports? That’s blank stare territory.

“I realized,” she explained when I asked, “that if I wanted to see my husband in the fall, I would need to watch football. Because that’s what he does. On like five different TVs. And so I asked him to teach me the game.”

(And apparently he did, with great enthusiasm, because she went into a long explanation of who all the players were, what they were supposed to do, and – did I know this already? – that they had four chances to go ten yards every time! Dee thought that was good stuff.)

In each of these cases – the car ad, the 30-Day Challenge, and the newlywed football tutorial – the men were overjoyed. No surprise there. But what captivated me (and what gives credence to the whole “’Tis better to give” thing) was how utterly giddy the women were.

Dee hasn’t been this excited about television since she watched that woman sew clothes for a squirrel in My Strange Addiction. Anne Ferrell has mastered so many plays that she could coach her own team. And that girl in the car ad? I don’t think she was acting. She loved it that she could make her fake boyfriend’s day.

Proverbs 11:25 says, “A generous person will prosper; whoever refreshes others will be refreshed.”

Maybe every married couple should adopt that line as their motto. Because these gals started learning about football as a love-gift for their men, but honestly? They’re the ones reaping the blessings! They know the joy of making someone happy. The satisfaction that comes with learning something new. And the sheer delight of spending time (and, one would hope, eating nachos) with a guy that they love.

If your spouse’s interests include coffee in the morning (and Robbie, if you are reading this, can I just say thank you?), bring ’em a cup. If it’s football that he (or she!) values, go ahead and Google “triple option offense” (they have diagrams online; I checked).  Whatever it is that your beloved is into – old books, new cars, gluten-free meatloaf – take some time this week to learn about these things, or to give them a place amid the stuff that matters in your life.

You’ll think you’re the one doing the giving (and you are). But take it from the adorable couple in the car ad:  Generosity cuts two ways. You will both be happy. And you will wind up being refreshed. 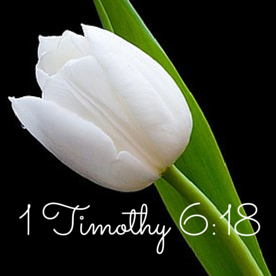 Here’s a simple prayer that packs a powerful promise.  Try praying it for yourself or for someone you love: 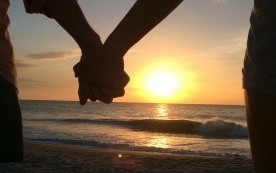 Robbie and I are gearing up for the Alpha Marriage Course, which starts this Sunday night at our church.  It’s a terrific class and you’d think that, having taught it five times already, my beloved and I would be coasting, but every time we go over the material, we learn something new.

One time, for instance, “we” learned that it’s not a good idea to interrupt your spouse when he is talking (even if you are pretty sure that what you have to say is way more interesting).

During another session, “we” discovered that cleaning out the garage is not, in fact, everyone’s primary love language.  Some people, it turns out, would rather have sex.

And then there was the time that we got to grade each other on questions like, My partner is good at meeting my emotional needs, and “we” got a zero.  (Honestly, though, that was not a fair question.  I mean, I didn’t even know Robbie had emotional needs.)

So here we are, getting ready to go at it again.  And this time I have a secret weapon:  I’ve been following Brad Wilcox on Twitter.  Wilcox is the brainiac behind the National Marriage Project, and his research offers everything from tips on improving your relationship to indicators that a marriage will last (inviting a lot of friends and relatives to your wedding bodes well; “sliding” into cohabitation before marriage does not).

Sometimes, the findings are surprising.  Like, you might expect things like “commitment” and “sexual intimacy” to show up as factors linked to a happy marriage.  But the third of the Big Three?  Generosity.

Generosity.  As in, being liberal with affection.  Quick to overlook offenses.  And (get this, from the research): 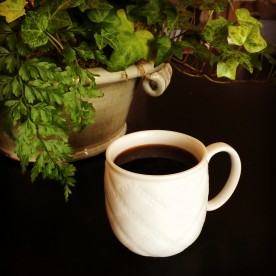 Making your honey a cup of coffee in the morning.

“In marriage we are expected to do our fair share when it comes to housework, child care and being faithful,” Wilcox explains, in a New York Times Magazine article, “but generosity is going above and beyond the ordinary expectations with small acts of service and making an extra effort to be affectionate.”  And that, he says, promotes a “virtuous cycle” that leads to happier marriages.

Wilcox & Co. even have a quiz you can take to determine your generosity rating.  I’d take the quiz, but Robbie’s the one who makes the coffee around here, and I don’t want to go into Sunday’s class with another big “L” on my stat sheet.

But I am going to try to be more generous.  Like, when Robbie brings me my coffee in the morning, I will tell him I love him.  Even if it’s not hot enough, because I will know to overlook that.

See?  Who needs a marriage course?

(But do check out The Marriage Course.  It doesn’t matter if you’ve been married for one year or 50, you’ll find it well worth your time.  Even if you already know that your man has emotional needs.)