After reading my Garden Tour post last week, a friend texted to say she was sorry she’d missed it – except that maybe it was just as well, since looking at other people’s potted ferns and five-burner cooktops can just make you jealous. I get that. I came away from the tour with more than a couple of new items on my covet list, starting with a machine that makes crushed ice.

Only in your house.

(How am I supposed to be content in all circumstances, now that I know those things are out there?)

Anyhow, the tour hostesses could not have been more gracious, but they did not offer to open any closets. Which was a good thing for me, since there is probably nothing that fuels my admiration (or envy) more powerfully than the sight of someone else’s storage skills. Especially when it comes to linens. I love the promise of crisp white sheets, freshly folded towels, and blankets that still have their bindings. My neighbor Molly has a linen closet that would make Yves Delorme drool. (I saw it, once. And ever since I have been wondering if there is a polite way to ask a person, when you go to their house, if you can maybe just take a nap.) 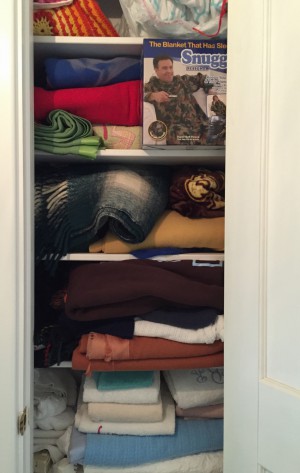 Ugh. I don’t know why I’ve kept half this stuff. Like, what houseguest would seriously want to dry off with the 30-year-old monogrammed towels that Robbie and I got for a wedding present? And who on earth (except maybe my pal Colleen) is ever going to want that “designer edition” camouflage Snuggie? I mean. Everything in here got rejected by my college kids. That right there tells you something.

Honestly, it’s embarrassing. And I wouldn’t even show you this picture (I wouldn’t even open the closet) except for something I read this week, something that just cried out for a photo of blankets. Here it is:

Long ago, even before he made the world, God chose us to be his very own through what Christ would do for us; he decided then to make us holy in his eyes, without a single fault—we who stand before him covered with his love. (Ephesians 1:4, TLB)

Oh my gosh. Do you see what God did there? He didn’t tell us to “straighten up” or “get it together” before we could come in and say hi. Instead, he took the initiative. He wanted to make us holy, and so he took all our faults, pushed them together, and covered the whole pile with his love.

What this verse means is that when God looks at me, he doesn’t see a gal with threadbare guest towels who can’t keep her closets straight. He doesn’t see me coveting my neighbor’s crushed ice. He doesn’t once look at me and say, “Oh gosh, what a mess. (Did I make that?)”

Instead, thanks to what Christ did, all God sees is love. His love. I’m covered in it!

And so are you.

And here’s the thing. I would love for my linen closets to look like the ones you see on Pinterest. I’d like for my life to look that way, too. But that’s not gonna happen. I know, because I’ve spent more years than I care to admit trying to whip myself into shape. I might get things to look presentable for a day or two, but it doesn’t last. Sooner or later, the Snuggie in me starts to fall out.

If you’re like me and you’ve realized (again) that you don’t have what it takes to succeed, spiritually (or, if you’re one of those rare people who thinks that maybe you do), hit the pause button. Because nothing we could ever do (or not do) will render us holy. Nothing we could ever say (or not say) will make us faultless. All of that stuff is up to God, and he’s already done it.

So let’s not spend another minute worrying about the linen closets of our lives. Instead, let’s snuggle up in the blanket that is God’s love, and rejoice in the fact that he has us covered.