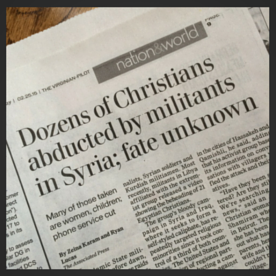 For Christians, persecution is nothing new.  Way back when the Apostle Paul was sending letters from prison, he warned his young protege, Timothy, that such suffering was part and parcel of the Christian life.  “In fact,” Paul wrote, without any attempt to sugarcoat his message, “everyone who wants to live a godly life in Christ Jesus will be persecuted” (2 Timothy 3:12).  Shortly after writing these words, Paul was martyred.

Persecution is nothing new, nor (if we believe Paul’s words) should it surprise us.  Still, though, we recoil from the horrific videotaped execution of 21 Egyptian Christians, or the news that 150 of our fellow believers – women, children, and elderly people – have been abducted in Syria.  We grieve, we get angry, we feel impotent.

And, even though we may live half a world away, we can relate to the Assyrian Christian woman interviewed by the Associated Press this week:  “I just feel so helpless,” she said, as she awaited news of her relatives’  fate. “I cannot do anything for them but pray.”

I cannot do anything for them but pray.  That sounds so insignificant, yet it holds so much power.

Encouraged by the #Pray703 movement, which calls people to pray for the persecuted Christians at 7:03 a.m. every day, I began praying in earnest this week.  I started by looking up verses about persecution, and was immediately captivated by Hebrews 10:33, written to a group of people who had faced more than their fair share of suffering:  “Sometimes you were publicly exposed to insult and persecution; at other times, you stood side by side with those who were so treated.”

That’s what I want to do.

Here are just a few of the verses I prayed this week, if you want to join me:

Show yourself faithful, O Lord.  Strengthen and protect our brothers and sisters from the evil one.  (2 Thessalonians 3:3)

Remind these persecuted Christians that nothing – no hardship, persecution, famine, nakedness, danger, or sword – can separate them from your love.  (Romans 8:35-39)

Thank you for our brothers and sisters who have given an answer to those who have asked about the reason for their hope.  Thank you for their gentleness and respect.  May those who speak maliciously against them be ashamed of their slander.  (1 (Peter 3:15-16.)

Let our brothers and sisters take refuge in you and be glad; let them ever sing for joy.  Spread your protection over them, bless them, and surround them with your favor as with a shield.  (Psalm 5:11-12)

In Paul’s letter to Timothy, he said that evil men would go “from bad to worse, deceiving and being deceived.”  Those words might as well have been written yesterday; they were true then and they are true today.  And yet neither Timothy nor Paul lost hope.  Instead, they stood side by side with their fellow Christians, enduring unimaginable hardship, trusting God, and proclaiming the name of Christ.

Side by side.  Let’s stand with them, together.