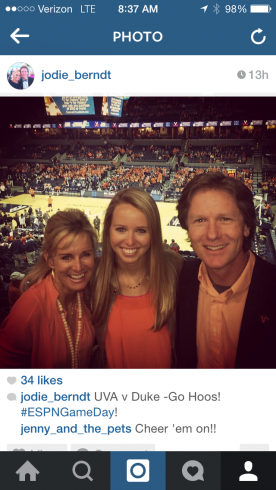 On Saturday, January 31st, my beloved (and, until then, undefeated) U.Va. Wahoos fell to Coach K and his perennially strong group of Blue Devils.  I’m sure our guys took the loss hard – we all did – but the boys regrouped, and just two nights later they stomped on the Tarheels in Chapel Hill.  It was U.Va.’s first win over a ranked Carolina team in that venue in 24 years.

If you follow college basketball (and if you don’t, now’s a good time to start, what with March Madness about to hurtle into your living room), you know that there’s nothing sexy about U.Va. hoops.  Well, nothing except the obvious, scrawled on one of the signs waved by a zillion giddy U.Va. fans during ESPN’s Game Day telecast just prior to the Duke game:  “Our Coach is Hotter than Yours.”

“Our coach” is, of course, Tony Bennett.  Under his direction, U.Va. players learn to execute a slow-and-steady game, one whose success is rooted in a defense designed to herd an opposing shooter into a “pack,” forcing him to either kick the ball back out or attempt a heavily defended shot.  The system only works if everyone buys in, putting the good of the team above his own desire to shine.  Where other top-ranked teams rely on a bevy of talent (Duke and #1 Kentucky have 18 McDonald’s All-Americans between them), Virginia (with a grand total of zero of these guys on the roster) wins because of one main reason:

The trust their coach.

I’m not an athlete, but I can’t help but believe that Bennett’s slow-paced, humble approach doesn’t always go down easily for all of the guys, once they get a locker in Charlottesville.  All-American or not, the fact that they earned a spot on an ACC squad means that every kid on the U.Va. team was a total stud in his high school; you gotta believe they all had some pretty heady press coverage in between getting their driver’s licenses and finding a prom date. And you know that all of them come equipped with some spectacular moves.  Granted, we’ve seen plenty of mile-high dunks and seemingly impossible three-pointers, but generally speaking, when you watch U.Va. play you sometimes get the idea that you’re watching a bunch of thoroughbreds who are, by sheer force of will, reining it in in deference to the wisdom of their coach.

Which reminds me, actually, of Proverbs 3:5-6.  Trust in the Lord with all your heart and lean not on your own understanding; in all your ways acknowledge him, and he will make your path straight. 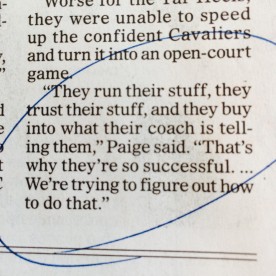 Now, I am not trying to compare Tony Bennett to God (although the man does love Jesus, and the family resemblance shows).  What I am trying to get across (in what may be my first and only sports column) is that when we make a decision to trust God instead of our own instincts – or, to borrow a phrase from UNC’s Marcus Paige in his post-game interview, to “buy into what our coach is telling us” – good things happen.  We get wisdom beyond what we’d naturally have.  The crooked places in our lives become straight. There may be hurdles along the way (the “Duke Games” of our lives, if you will), but in the end, we will set ourselves up for victory.

From where I sit, it would appear that all of the U.Va. ballplayers trust Coach Bennett.  More encouraging, even, is that a big chunk of them trust their Heavenly Coach as well.  It’s a mighty fine program, one for which fans are grateful.

And, on behalf of those of us who daily make (sometimes difficult) decisions to try to do things God’s way instead of our own, can I just say to all the U.Va. guys (and Mike and Evan, I am going to make you read this):  Thanks for the life lesson.  It helps.