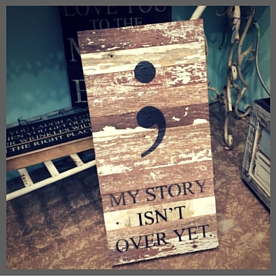 I saw this sign in a shop in Duck, North Carolina, and I loved it.

For one thing, the semi-colon is my favorite punctuation mark. It’s more than a comma, but not quite a period; honestly, I think it offers the best of both worlds. The semi-colon lets a writer coordinate two independent sentences that could stand alone, but are just better when paired. Think of it as the grammatical equivalent of wine and cheese.

And what a terrific message:  My story isn’t over yet.

I don’t know how the Apostle Paul felt about semi-colons, but if he were on my Christmas list, I’d be getting him one of these signs. I just finished re-reading about his life in Acts, and if ever anyone had a two-part story, it was this guy. Part One had Paul trying to destroy the early church, going house-to-house and dragging out Christians – men and women (!!) – to be beaten and thrown into prison; in Part Two, we find him tromping all over the place, building that same church through personal visits and powerful letters, and proclaiming the good news about Jesus from his own jail cell! Hooray for the semi-colon!

I don’t know about you, but if I had been in Paul’s shoes (and given his fondness for athletic metaphors, maybe I should say cleats), I think I would have benched myself, once I realized how awful I had been. Sure, I would have wanted to be on God’s team, but given my past “mistakes” (things like stoning people who talked about God’s goodness), I might have tried to live life in the shadows, leaving the contest to the “varsity” Christians who didn’t seem to be such big screw-ups.

But not Paul! He knew what he had done was bad (horrific, even) but he wasn’t gonna let his past influence his present or his future. He understood God’s grace. He received it. He knew his story wasn’t over yet – and that changed everything.

How many of us really believe that? How many of us really believe the message of grace: that, thanks to Christ’s triumph on the cross, nothing that we’ve ever said or done or even thought has the power to disqualify us for a spot on God’s team? His varsity team? How many of us can say, as Paul did in Philippians 3, “Forgetting what is behind and staining toward what is ahead, I press on toward the goal to win the prize for which God has called me heavenward in Christ Jesus”?

I checked a few commentaries, and the word “forgetting” doesn’t mean that Paul had some sort of convenient amnesia, or that he just blocked out all the yucky stuff he had done. Instead, the idea is that these things no longer shaped or defined Paul. They couldn’t rob him of his salvation or his fitness for service; instead, Paul knew that God could (and would!) work in and through all of these failings to bring about good in his life and in the lives of others (and, although he couldn’t have known it at the time, in the lives of billions more people who would one day read his story).

If you have a past (and who doesn’t?), don’t let it steal your purpose or your joy. Don’t believe the lie that says, “You stink; how could God ever use or love someone like you?” Instead, take hold of the truth: You do stink (as Tim Keller puts it, we are all “more wicked than we ever dared believe”), but in Christ, you are (Keller again) “more loved and accepted” than you ever dared hope! Like Paul, you really can “forget what is behind” and “press on toward the goal,” because God adores you – and he is still writing your story.

And by the same token, if you’re praying for a friend or loved one whose life seems to have gone off the rails, remember that their story isn’t over yet. As one sweet mama said when I asked her how her teenaged daughter was doing, “Well, she’s still working on her testimony.” This gal understood the real life application of verses like Romans 8:28; she knew that, in God’s hands, all of the stuff to the left of the semi-colon would one day be used on the right – and that the sentence, once completed, would be glorious.