I’ll admit it. I laughed out loud when I opened the paper and saw Dilbert this week:

Case in point: When I called my college pal, Annesley, to ask if I could borrow her name for our newborn daughter, she readily agreed–as long as I didn’t start calling her “Big Annesley.” Or even “Old Annesley.”

(We went with “Original Annesley,” which is perfect. On so many levels.)

I don’t, as a rule, find deep spiritual lessons in Dilbert. But when I considered Big Tina’s apparent reluctance to be saddled with that moniker, I thought: You go, Girl! Don’t let anybody call you something you don’t want to be called. Do not receive that!

Because we do that, don’t we? Whether it’s a label someone else gives us, or an accusation that comes from inside our own heads, all too often we accept the name and start wearing it–even if it’s a name we don’t want. A name like Unworthy. Or Ashamed.

But…that’s not who God says we are. He knows us better than anyone–he knows exactly how we are formed–and he calls us his “masterpiece.”

He says we are precious and honored in his sight. And that, as we look to him, our faces are never covered with shame. And that he will never leave us.

He calls us “Beloved.”

Why? It’s not because of anything we’ve done. It’s just because we are his.

Which, for me, can sometimes be hard to wrap my head around. Like, on the days when I blow it, does God still love me as much as on the days (well, the day) when I get things mostly right? Does he really want to be with me, even when I don’t want to be with myself? Is there something I could do, some gold-star behavior, that would make God love me more?

The answers, for those who don’t like rhetorical questions, are: Yes, yes, and no. There is nothing I could do–nothing any of us could do–to make God love us any more (or any less) than he already does.

I was reminded of God’s love–and how he feels about us–a month or so ago, when I visited a friend in Atlanta. Her eldest daughter is all grown up and married, so I got to sleep in her old room. And when I got up in the morning, I was greeted with this: 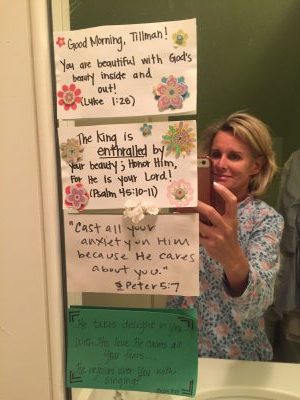 Pardon the PJs, but honestly? I can’t think of a better way to start the day than by heading into the bathroom and seeing these reminders of who we are in Christ! We don’t even have to brush our teeth before God says he’s “enthralled by our beauty.” And if we’re worried about something (like, say, we can already tell that it’s not a good hair day) we see evidence of his love: “Cast all your anxiety on him,” the card reads, “because he cares for you.” (That’s 2 Peter 5:7 if you can’t make it out in the pic.)

If you like this idea (of if you think your kids might), I’ve pulled nine “identity markers” out of the Bible and put them in printable form for you here. These cards aren’t fancy (you’ll have to cut ’em up by yourself, and add your own flower-power stickers, or whatever), but they offer a window into who we really are, in God’s eyes: 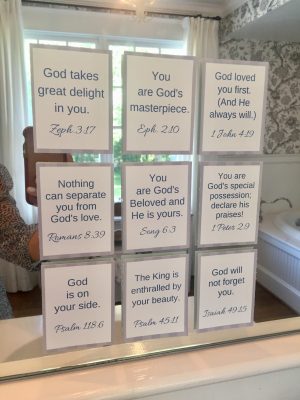 And please note. These verses are not like those faux-motivating things you put on your fridge–like the pic of the skinny girl in the bikini–to make you think “This could be you!” The words on these cards are already fulfilled. And they will always be true (even if you do eat that last piece of cheesecake).

So the next time the Father of Lies comes along and tries to call you Big Tina (or worse), set him straight.

Look him straight in the eye and tell him your name is Beloved.