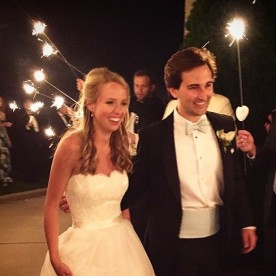 Well, Annesley and Geoff are now Mr. & Mrs. Cole, and we couldn’t be happier!

I’d fill you in on the wedding details, but since Friday’s posts are meant to be prayer helps, I want to back up and give you a peek at something I prayed for Geoff last week.  (If you want wedding stories, check back in the next week or two;  for now, consider borrowing the prayers in this post for your own son-in-law, your son, your husband…or your hoped-for husband!  It’s never too early – or too late – to start praying for your man!)

First, though, a bit of background:

Like many of you, I like to have a strategy when it comes to Bible reading.  I can get easily distracted, and having a plan for what to read each day helps keep me on track.  (It also means that, eventually, I will have to get around to the parts I wouldn’t normally read…and as some of you know, one of my greatest fears is showing up in heaven and having someone like Obadiah say, “How did you like my book?”  I want to be ready for that!)

Anyhow, right now I am on a two-year reading course (if you want to download the plan and join me, click here) that currently has me in Matthew.  I’ve probably read the Christmas story a zillion times and I’ve always admired Mary, but last week, as I thought about my own daughter and her impending nuptials, I found myself drawn to Joseph.  He doesn’t get much press coverage, but if you read Matthew 1 and 2 with an eye toward discovering a little bit about his character, you’ll find a treasure trove.

Here are just a few of the nuggets:

Matthew 1:19 calls Joseph a “righteous man” who didn’t want to expose Mary to “public disgrace.”  In an age where reality television has made revenge and public humiliation an acceptable response to just about any offense, we might not have blamed Joseph if he’d pointed a few fingers.  He had to have figured that Mary had cheated on him, but instead of ridiculing her or doing something to salvage his own reputation, he planned to end things quietly.  Classy guy.

And in the very next verse, when the angel shows up to set the record straight, Joseph doesn’t protest.  He had to have been thinking, “Whaaaat??”, but instead of peppering the angel with a bunch of questions, he simply accepts God’s word as truth – and he acts on it.  A man of genuine faith.

And that acceptance becomes a pattern.  Again and again in the narrative, we see Joseph following God without hesitation, even when the instructions seemed a little incomplete, or when obedience meant getting out of bed and fleeing during the night, with a wife and a baby in tow (see Matthew 2:13-14, 21, and 22-23).

What a guy!  And what a model for our prayers!  I used Joseph’s example as a way to pray for Geoff, as well as for my husband, my son, and my future son-in-law, Charlie.  Go ahead and put the name of a man you love right into this prayer, and make it your own:

Heavenly Father, make _____ like Joseph.  Let him respond to insults and offenses – whether real or perceived – with wisdom, tact, and grace.  May he always put the needs and reputation of others ahead of his own.

Give ____ a keen sensitivity to your Holy Spirit.  Speak to him, Lord, and tune his ear to hear your voice.  When you give him instruction, equip him to follow it wholeheartedly and without hesitation.  Strengthen his faith so that he will stay when you say “stay” and move when you say “move.”

As _____ cares for his wife and family, be his protector, his guide, and his Father.  May he always put his trust in you.