(Note: Robbie and I are in Canada this week. We’re enjoying some good “unplugged” time, but here’s a quick post–along with a pic of the evening view from our dock. This place isn’t fancy, but if you don’t mind a few snakes, mosquitos, and a composting toilet, it’s pretty much paradise.)

“Here is a theologian who puts the hay where the sheep can reach it.”

That’s how Elisabeth Elliot describes J. I. Packer in his timeless book, Knowing God. And I have to say that one of of Packer’s most encouraging messages (at least for bottom-shelf sheep like myself) is that nothing we do–and nothing we have ever done–comes as a shocker to God. And none of it can keep him from loving us.

Here’s how Packer puts it:

There is tremendous relief in knowing that His love to me is utterly realistic, based at every point on prior knowledge of the worst about me, so that no discovery now can disillusion Him about me, in the way I am so often disillusioned about myself, and quench His determination to bless me.

We can’t quench God’s love. Or (and I love this part) his determination to bless us.

That’s good stuff. But Packer didn’t make it up, of course. I suspect he got it from places like Romans 8:38, which is where Paul says that nothing–neither death nor life, neither angels nor demons, neither our fears for today nor our worries about tomorrow, not even the powers of hell–can separate us from God’s love. 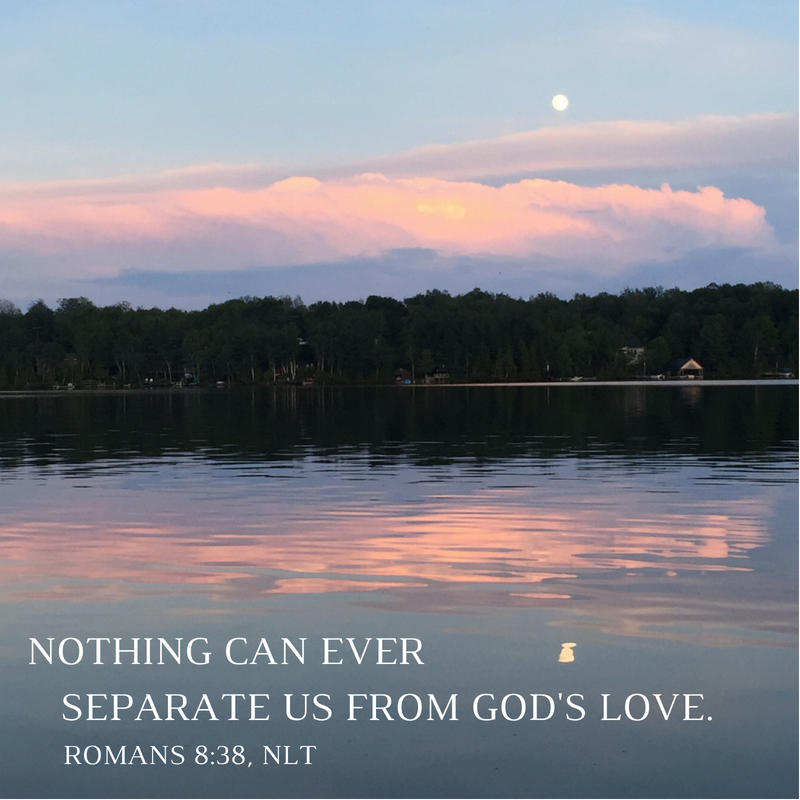 Maybe just take a moment right now and let those words settle over your soul.

And if you, or someone you love, needs a little help when it comes to receiving the reality of God’s limitless love, here’s one way we can pray:

I pray that _____, being rooted and established in love, may have power, together with all the Lord’s holy people, to grasp how wide and long and high and deep is the love of Christ, and to know this love that surpasses knowledge—that _____ may be filled to the measure of all the fullness of God. (Ephesians 3:17-19)

Robbie and I spent last week at a lake in Ontario, Canada. It’s a place he went every year as a child, as did his father before him. And it’s where we used to take our kids in the summer, before they grew up and got stuff like husbands and jobs and apartments in far-away cities.

This time, it was just the two of us. We’d been looking forward to cooler temps, water sports, and endless hours to read and relax. But then we pulled up to the boathouse, and I knew I was in trouble. Because here’s how I remember it looking, back in 2007: 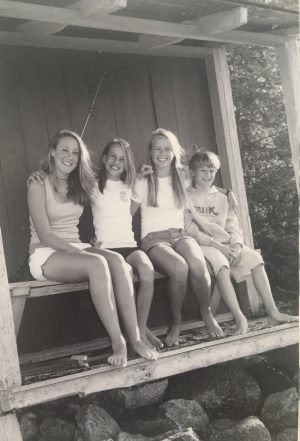 And here’s how it looked last week: 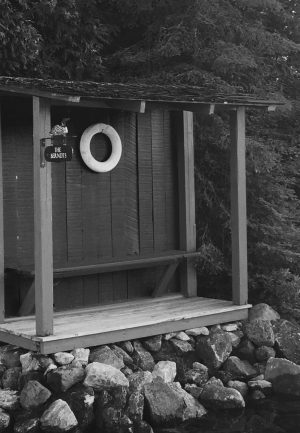 Same thing for the dock. It’s where we used to hang out and fish, or have early morning quiet times: 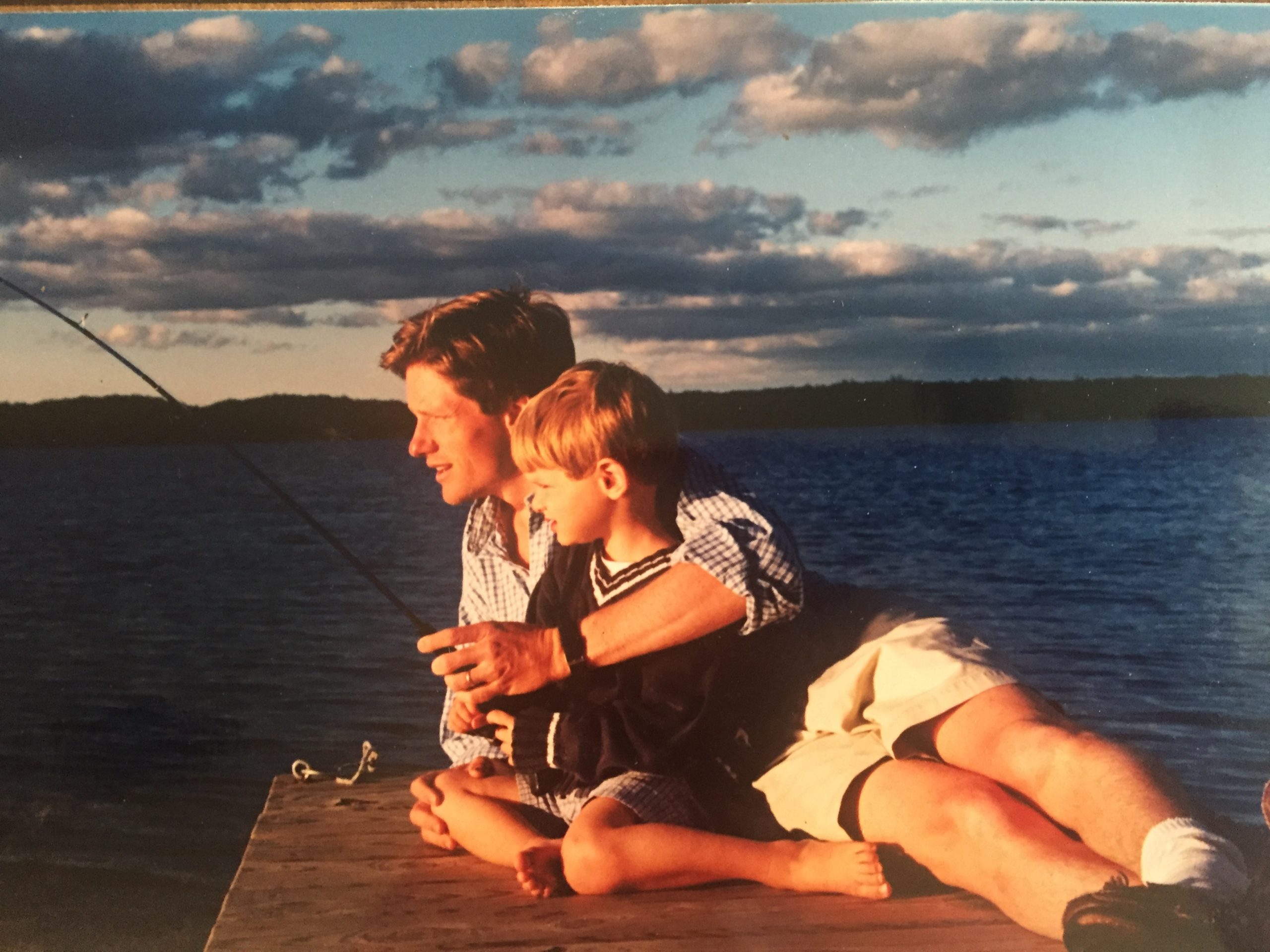 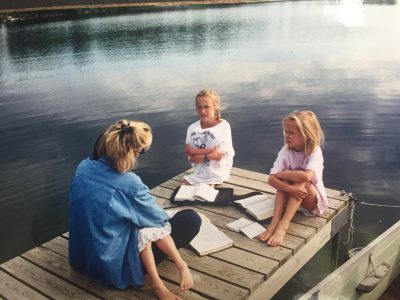 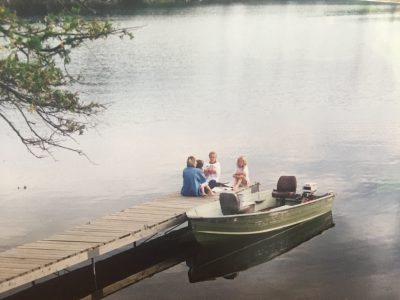 Now, not so much: 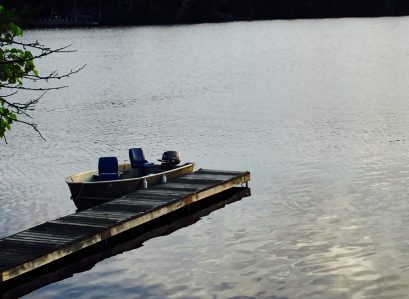 Everywhere I looked, there were reminders of days gone by, family memories that we’d never make again. I was becoming positively morose. It was not attractive.

I know what Dr. Seuss says – Don’t cry because it’s over. Smile because it happened. – but honestly? I’ve never really liked that line. I want to do both.

This was the first time I’d been back to the lake in 10 years, and I just wanted to camp out for a bit and boo-hoo.

I knew, though, that being gloomy wouldn’t solve anything. (It certainly wouldn’t make things better for Robbie.) And it wasn’t like my whole life was over; it was just one season. Plus, my children are basically happy. And healthy. And I am pretty sure they’re all tracking with Jesus. What did I have to complain about?

And so I tried to smile (because it happened). Still, though, I couldn’t shake the sense of loss. I decided to take my case up with God.

“God,” I said, “I know you don’t mean for anybody to wallow, or get stuck in the past. I know you have plans and purposes and good things in store. And it’s not like you’re going to leave me hanging for the next 40 years, right?”

And God is so sweet. He did two things at once.

First, he reminded me of that verse where he talks about turning the page and starting a fresh, new chapter instead of dwelling on the past. I didn’t remember the reference so I looked it up: See, I am doing a new thing! Now it springs up; do you not perceive it? I am making a way in the wilderness and streams in the wasteland. That’s Isaiah 43:19. I think it’s a great promise for an empty nester – or for anyone facing a time of transition, whether it’s a student headed off to college, a family making a cross-country move, or a loved one taking on a new job. If that’s where you are, go ahead and look that one up for yourself. Consider it yours.

The second thing God did came via email. Two years ago, my friend Annesley wrote a column for Theological Horizons, an organization that serves students at U.Va. I missed the article back then, but for some reason they ran it again, and I got to read it last week. It’s a great piece about transition – not because it solves the sadness issue but because 1) if you cry at Kindergarten Graduation, it lets you know you’re not alone, and 2) it ends with a wonderful prayer for our kids as they move on (or, for that matter, for anyone facing a season of change). If you want to read Annesley’s piece, click here.

First, I asked God to help me perceive his work and get on board with whatever way he might be making – in the wilderness, the wasteland, or wherever. If God’s on the move (and he pretty much always is), I don’t want to get left behind!

Next, I thanked him for Annesley’s writing, and for the comfort that comes when you realize that you’re not alone in the boat. (And if you’re facing your own season of newness right now, whatever it is, I want you to know that I’m praying for you and your family as I write…cuz I get it!)

And finally (and this was a critical step for me, but one you could probably skip), I took my cue from the Grinch. Remember how he wanted a reindeer but, since “reindeer are scarce,” he had to grab his dog, Max? Yeah, well. I wanted a kid so I could snap their pic on the dock, like I did with Robbie Jr., 20 years ago… 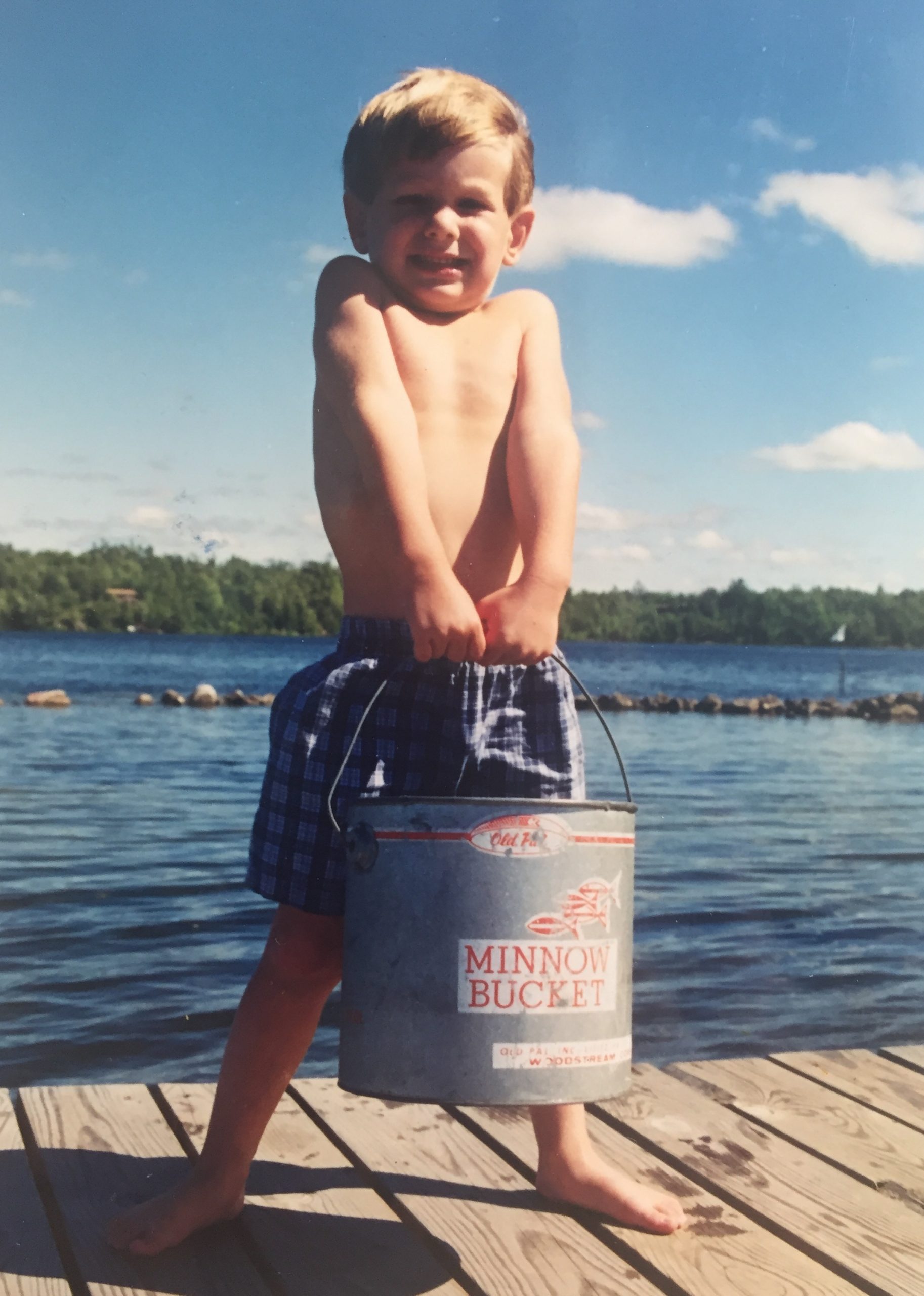 …but since my kids, like reindeer, are generally scarce, I got the dog to stand in. And, like his namesake (we got him on Christmas), Max did a mighty fine job: 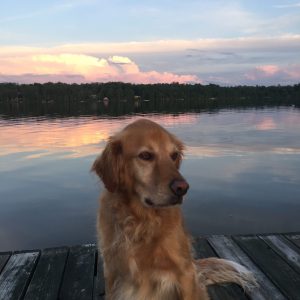 Robbie and I spent the past week at a lake in Canada. I’ll tell you more next week (including why our northern escape from the mid-summer heat was not, actually, pure joy), but for now I will just share this one pic: 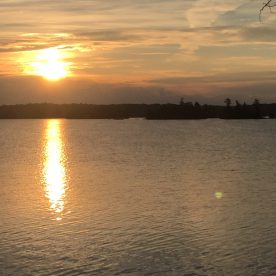 (That, in case you can’t tell, is a Canadian sunrise.)

I had to share the photo with our children. First, though, I did some editing: 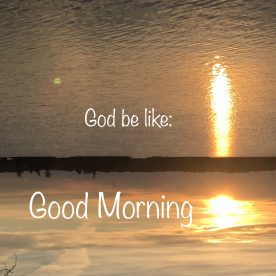 I thought I was so clever! And that my kids would wake up and be so encouraged and happy!

Two hours later, I got this reply: 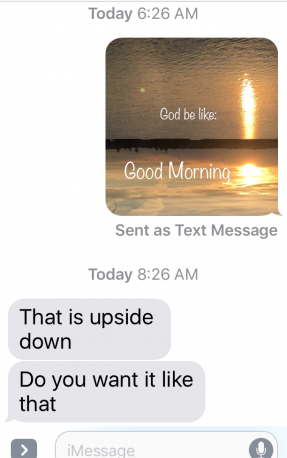 Okay. So am I the only one who thought the sunrise looked like an upside down exclamation mark? I mean, did you not notice that?

Sigh. All my best stuff is wasted on my kids. Maybe I should have just texted them a Bible verse. There are plenty of good ones that have to do with the morning. Consider, for instance, Proverbs 27:14: If anyone loudly blesses their neighbor early in the morning, it will be taken as a curse.

(As in, say hello if you must…but not before coffee. And not, if you please, with too much enthusiasm.)

Or Genesis 29:25, which details Jacob’s surprise after being tricked into sleeping with the wrong sister:  When morning came, there was Leah!

Honestly, though, if I were to pick just one Bible verse to wake up to, I think it would have to be Lamentations 3:22-23:

The faithful love of the Lord never ends!
His mercies never cease.
Great is his faithfulness;
his mercies begin afresh each morning.

Is that not just the best? What these words mean is that yesterday’s mistakes are over. God’s love has them covered. And he’s got a fresh helping of grace for today.

I love that. And I think it’s got the makings of a great Friday prayer, either for yourself or for someone else who needs to know this good news:

Your faithfulness is great.

Help _____ remember these powerful truths. May _____ know that your mercies are new every morning. Thank you for giving us a brand new start in your love, every day.