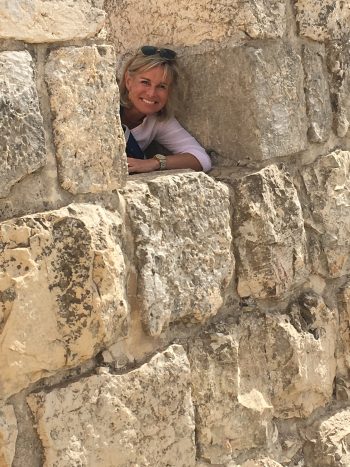 (That’s me, atop Jerusalem’s walls.)

There were 32 of us on the tour–mostly from Colorado Springs, but a handful of y’all-ers represented the nation’s southeast. We connected via a mutual love of Young Life (an organization that thinks every kid, everywhere, should be able to experience the hope Jesus offers), and we were privileged to meet some of the Middle East Young Life leaders and talk with a few of the teens. And as news outlets blared reports of yet more fighting in the Gaza strip, it was nice (amazing, actually) to meet Muslims, Christians, and Jews who were getting along. And even singing, sometimes.

But we saw all other stuff, too. Lots of it. All the places, in fact, that you read about in the Bible: The Sea of Galilee. Capernaum. Caesarea. The Dead Sea (in which even Robbie, who has .2% body fat, could not sink): 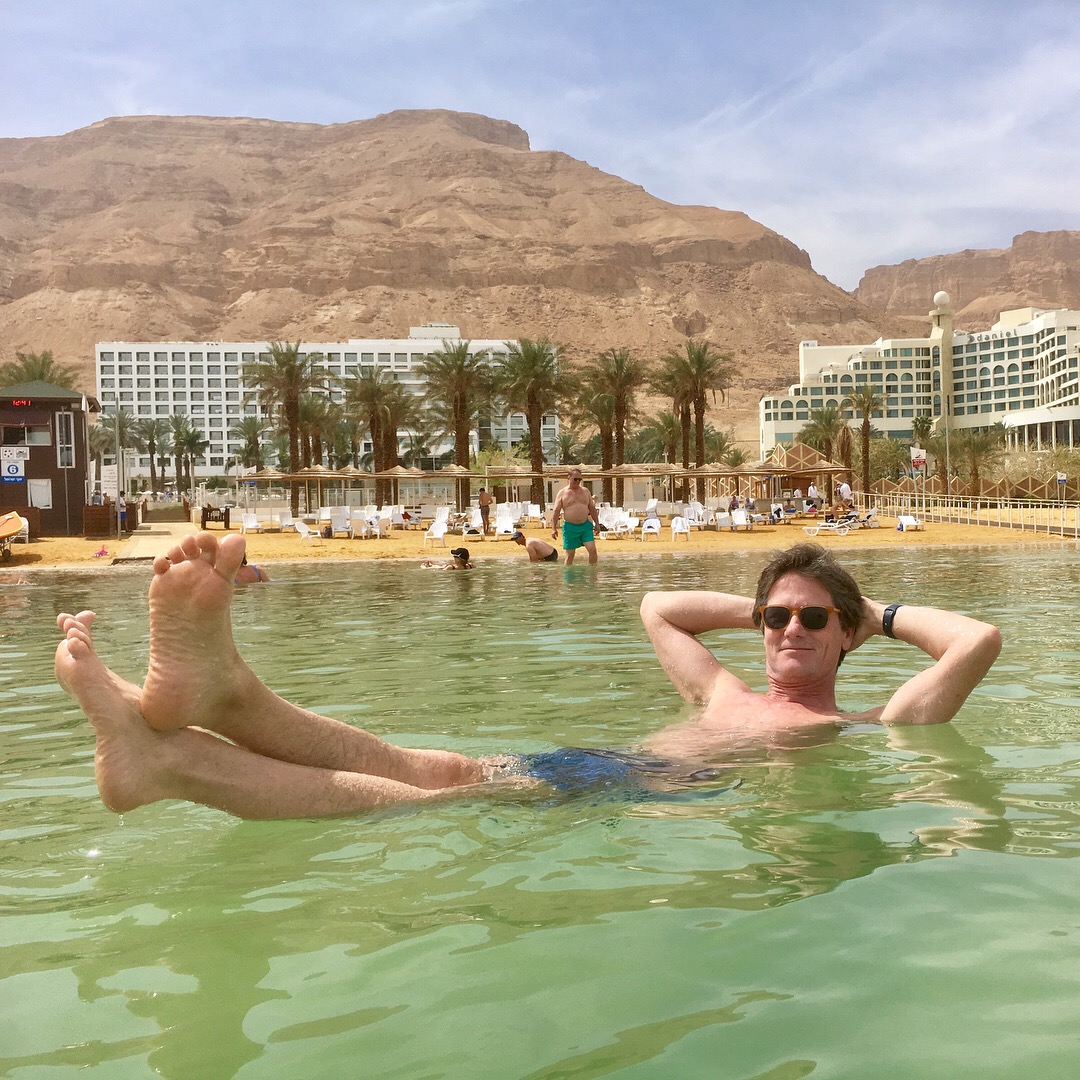 And, of course, we got baptized in the Jordan. True confession? Coming from a tourist town where people get salt water taffy and tattoos “just because,” the prospect of getting dunked in a river was not something I thought would be all that special. I thought I’d feel like one more lemming in a rented white robe. 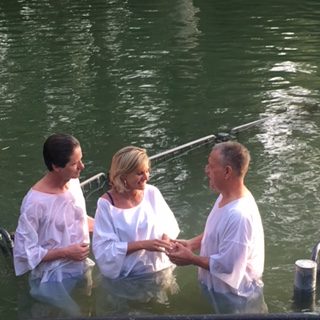 I was wrong. It was (and remember, I am not given to a lot of emotion)…really great. 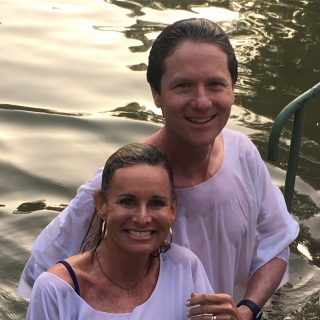 Along the way, our guides ranked all the sites that we saw. “A” meant that folks are sure something happened there; the synagogue at Magdala, for instance (a chill-inducing spot on the tour, and one I wrote about on Facebook and Instagram last week), is a place where we know Jesus taught:

They awarded a “B” ranking to places that seemed likely, based on all the stuff that we know. The house in Capernaum, where Jesus healed Peter’s mother-in-law (a miracle detailed in Matthew 8:14-15) is one such place. They’ve since built a BIG church on top of the house, but it’s somewhere in or under that circle of stones. 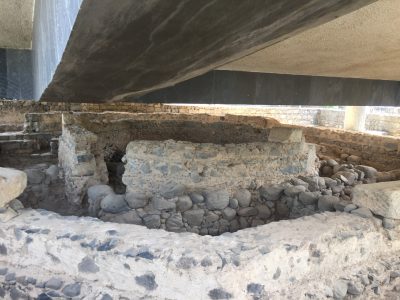 (Not sure Geoff and Charlie would want to live with me in that small of a space, even if I did wait on them like P’s mo-in-law did.)

And “C” places were those where something probably did not take place, but it’s possible–and if it wasn’t “here,” it was someplace “like here.” The garden tomb–the one everybody visits to be sure it’s still empty–is one of these spots. 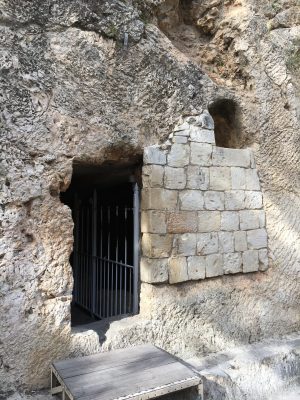 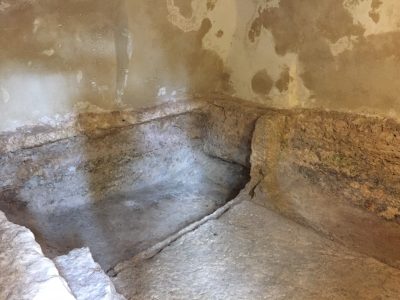 (Tour guides rate this place as a “maybe” because the stones date to Christ’s time, and because of things like the presence of an olive press in the garden, which would indicate that it belonged to someone rich. Someone like Joseph of Arimathea.)

(And, I imagine, because it’s a good place for a gift shop.)

Even though the Garden Tomb is a “C” (or a “Z,” if you believe the only ordained guy on our tour), it was one of my favorite stops. It was not peaceful (you could barely hear the Muslim afternoon call to prayer over the sound of the nearby bus depot and the varied groups of Christians from all over the world, singing praise songs in their native tongues), and yet, as our group took communion together, the spot was transformed. It became beautiful. All of a sudden, we were not in a “C” place at all. We were in the midst of a story–a love story–one where all the love in the world had been poured out for us, and all we had to do was receive. 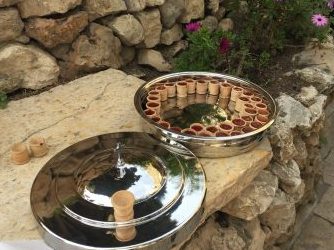 If you go to Israel (and I highly recommend that you do), you’ll see all of this stuff. But even if you never get there, you can still experience the best part of the story. Because Jesus really does love us–still–enough to die on the cross, and his power–his resurrection power–continues to transform our lives every day.

And every time we celebrate communion (every time we remember our Lord and his love!) it’s 100% real. It’s unimpeachably true. It’s what we’d all call, in tour-guide speak,  an A+.

I’m still processing the firehose of information we sucked down between bus rides and bathroom breaks (and there were plenty of both), and I’ll probably blog at least once or twice more about the things that we learned. If Scripture-spiced travelogues aren’t your style, please check back in May. I’m working on a printable gift for you mamas out there, and hoping to finish by Mother’s Day.

Also…for more info on Young Life in the Middle East, click here. And if you want help planning your own trip to the Holy Land, you’ve got to meet Andre and Tony, the guys behind Twins Tours. They know way more history than you do (even the American kind), but don’t worry. They are patient. And kind. And if you’re nice, they might even tell you you’re “brilliant.” 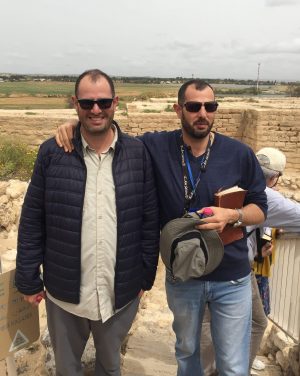