Back when Robbie Jr. turned ten, he wanted a family wrestling tournament for his birthday. Big Robbie was delighted with that idea and immediately set about making a bracket (which he literally put on a poster, with a title and everything). It didn’t really surprise me when I didn’t make it past the play-in round, but I was surprised by the scoring. I had no idea you could win (or lose) a wrestling match by so many points; I thought it was just pin or be pinned. But every time one of the children twisted me in a different direction, Robbie gave ’em more points, and I lost big.

I should have known better than to try to compete in the push-up competition we had a couple of weeks ago, during our family vacay. I’ll spare you the details, other than to say that my new favorite person is son-in-law Geoff, who was, I think, the only relative who did not criticize my form (and who, I am sure, spent the entire morning wondering why God couldn’t have hooked him up with a normal family, like maybe golfers). 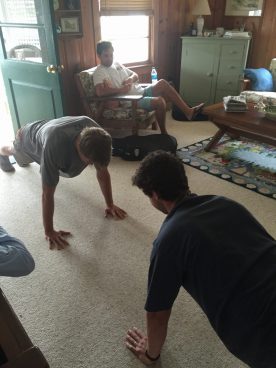 Suffice it to say, I am not a strong person. And during the past few months, as I have been working on the manuscript for Praying the Scriptures for Your Adult Children (more info on that one in a future post), I have not had all that much time to work out. You can imagine my dismay when I opened my Bible to Isaiah 10 this week and saw this:  “The yoke will be broken because you have grown so fat.”

Maybe you’re a fitness guru, the kind of person who wins wrestling tourneys and push-up competitions. Or maybe you’re not. Either way, the good news is that God has given us a secret source of strength that has nothing to do with muscle tone. It’s joy – and it comes from believing what God says in his word, and acting like you know it’s true. Because it is.

So here’s our Friday prayer. It’s one of my favorite verses in the Old Testament, partly because it pops up in a section where God’s people get to hear and understand his word, some of them for the very first time. May it encourage you as much as it encourages me:

May the joy of the Lord be your strength. (Nehemiah 8:10)