I once read that you don’t need to worry all that much about dust.  If you simply ignore it for six months, the tipster promised, it doesn’t really get any worse.

But I can tell you this, based on my own actual scientific research:  There is no discernible difference between the way that an un-dusted trophy looks after five years or ten. 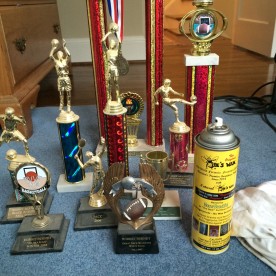 There is this really high shelf that marks the perimeter of Robbie’s room.  We started throwing the trophies up there when he was about five years old:  the Black Knights, the Purple Wolves, the Buckeyes, the Shark Attack, and even the Coronado Flower Show (Robbie snagged top honors in the “bean plate” division) are all represented.  Eyeing the collection from time to time, I would occasionally think to myself, “I should probably dust those some day.”

Anyhow, the trophies didn’t look as bad as I thought they might, after so many years.

Looking at them jumbled together on the floor, I was reminded of something C.S. Lewis said about time and the effect that it has on sin:

We have a strange illusion that mere time cancels sin.

It doesn’t, of course.  But, as Lewis observed (and if you want the full treatment, check out The Problem of Pain), we have this idea that long-gone offenses – the “cruelties and falsehoods committed in boyhood” – don’t matter anymore, or that they are of no real concern.

“But mere time,” Lewis said, “does nothing either to the fact or to the guilt of a sin.”

The fact or the guilt of a sin.  Like dust on the trophies, I guess, these things might not look any worse, over time.  (They might even be less noticeable, on a day-to-day basis, particularly as we get used to living with them.)  But they certainly don’t go away all by themselves.  The need the spiritual equivalent of The Original Bee’s Wax.

They need The Cross.

Talk about a product that works on everything.  Truly.  It doesn’t matter how long the dust has been gathering, or how thick it is.  The trophies that are our lives can be made new again, more beautiful than we could ever have imagined.  All it takes is repentance and a willingness to accept the forgiveness – the cleansing – God offers.

And I don’t know about you, but I want that.  I want my life to be something that showcases God’s glory, something that proclaims the victories he has accomplished – in spite of my layers of dust.

I don’t know if God has a trophy case, but if he does, I definitely want to be in it.