Once upon a time, when my man put on his wetsuit, it meant there were waves. And his Bean boots? A sure sign there were ducks.

Now, though, these wardrobe staples are more apt to mean there is mildew.

I keep trying to tell Robbie that pressure washing is kind of a sport. He’s less than convinced.

(And he did not really want to smile for this pic, which only makes me love him even more.)

The bad news is that I snapped this photo right after the pressure washer blew up. The good news (at least for me) is that seeing Robbie out there reminded me of a post I wrote two years ago and, since I am on the road this week, you’re getting a rerun. Hope that’s okay – and that you’ll read this and still know how much you are loved! 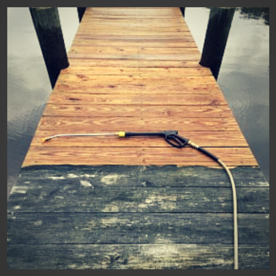 Now, I don’t generally like things that look all perfect and new, so this is not a project I would have encouraged. But when Robbie tactfully observed that we’d passed “vintage chic” a few years back and were now headed into the “slip-n-slide” stage of outdoor decorating, I saw his point. Weddings have enough natural pitfalls without sending Grandma and her wine glass into the bay, midway through the party.

Yeah, so pressure washing is harder than it looks.

Just starting the machine (which involves one of those ghastly pull cords designed to make men feel manly) was challenging enough, but if you’ve never pulled the trigger on one of those things, well. It took every ounce of my fourth-grade gymnastics training not to fall overboard from the kick. 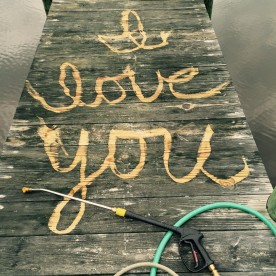