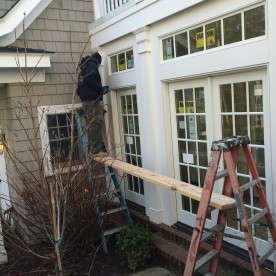 Robbie and I have a shared love for fixer-uppers.  Everywhere we move (and we’ve moved a lot), we look for the ugliest or most neglected house we can find, and we make an offer.

One time, we bought a house and raked the leaves in the front yard – a move that soon had neighbors stopping by to admire “what we’d done to the place.”  (Yes, it was that bad.)  Another time, we added some crown molding to the living room and a wrought iron railing to the front balcony, prompting the former owner’s wife to berate her husband:  “See honey?  That’s what I wanted to do when we lived here!  I kept telling you…”

And, in the house we currently call home, the hardwood floors rose and fell in so many directions that, if you’d dropped a marble, it wouldn’t have known which way to roll.  When the contractor removed the eight shims that he found in the basement (and I use that term very loosely…it was more of a hole dug during Prohibition by an enterprising bootlegger), the floors suddenly dropped into place.  Less charm, more structural integrity.  It was a trade-off that made Robbie happy.

Suffice it to say, we love making old things pretty again.  And right now, as I type, there is a handyman working away on our breezeway, which, thanks to one too many nor’easters in these parts, had begun to rot.  At first, I was kind of annoyed by all of the banging (children, dogs, workmen…there’s always something that gets in the way of the Pulitzer), but then I remembered one of my favorite C.S. Lewis quotes.  It’s from Mere Christianity:

“Imagine yourself as a living house. God comes in to rebuild that house. At first, perhaps, you can understand what He is doing. He is getting the drains right and stopping the leaks in the roof and so on; you knew that those jobs needed doing and so you are not surprised. But presently He starts knocking the house about in a way that hurts abominably and does not seem to make any sense. What on earth is He up to? The explanation is that He is building quite a different house from the one you thought of – throwing out a new wing here, putting on an extra floor there, running up towers, making courtyards. You thought you were being made into a decent little cottage: but He is building a palace. He intends to come and live in it Himself.”

Today, if you find yourself with some rotting woodwork or wavy floors in the space that you call your life, or even if there’s something pretty yucky that’s lurking in your crawlspace, don’t worry if the Carpenter comes in and starts making some noise.  Renovation can be messy, and even painful sometimes.  But hey – you’re becoming a palace!

And I don’t know about you, but I think that’s exciting.  (I could definitely use a new tower or two.)