If you’ve been around this blog for awhile, you’ve met my mother. You’ve read about the gorilla who came to her wedding (a story that comes with a side dose of hope for those who’ve lost spouses they love); you know she goes boogie-boarding in the snow (because age is a number, not a lifestyle); and you’ll remember how she helped save the day when the bus we’d hired to transport Annesley’s wedding party left the bride and groom at the church. 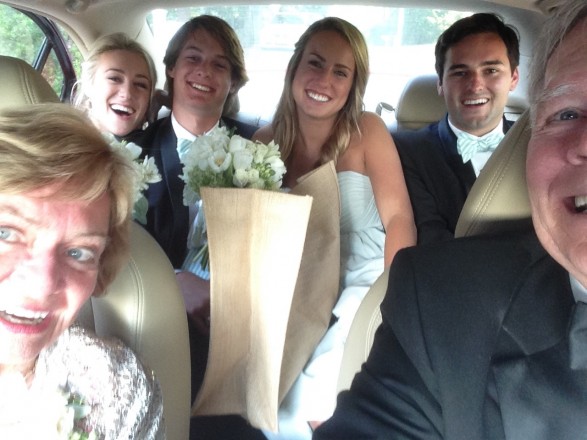 And in a brand new book called Faithful Daughter:  True, Inspiring Stories Celebrating a Mother’s Legacy and Love, I’m telling the story of how Mom taught me to get back at people who hurt me. 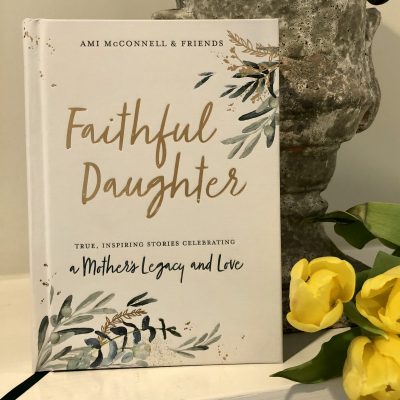 Faithful Daughter is the brainchild of noted writer and editor Ami McConnell. Ami asked 35 of her friends (award-wining novelists, best-selling authors, and gals who just love a good story) to write about how their mothers’ lives had shaped theirs. The compilation of essays–some marked by joy, others by searing pain–is as varied as the women themselves. But there is one common theme:  Namely, that there is no such thing as a perfect mother. And no perfect daughters, either. We’re all just women, daughters of God.

Who loves us just as we are.

If you want a chance to win a free copy of Faithful Daughter, pop on over to Instagram (@jodie_berndt) or Facebook (@jodieberndtwrites) and leave a comment about your own mom. I’d love to hear how her life, or her faith, left its mark on yours. And in the meantime, here’s my story…

An Inheritance of Blessing

I could hear him back there, bouncing his basketball. We were on our way home from elementary school, together and yet not. Thomas, the coolest boy in the whole third grade, walked twenty feet behind me. I didn’t look back.

Suddenly, the bouncing stopped. A split-second later, I felt the breath leave my body. Thomas had thrown his ball and—since he was also the most athletic boy in third grade—it had hit me, square in the back.

Three blocks later, I burst through my front door. “Mom!” I cried through my tears, “Thomas Mayfield [not his real name] just hit me in the back. With his basketball!”

“Jodie,” she said, “Thomas will be walking past our house in about one minute, and when he goes by I want you to say, ‘Have a nice day, Thomas.’

“And then I want you to curtsy.”

Like, when my sixty-one-year-old dad was battling brain cancer and lacked the strength to get from the car to their condo, and my mom told him to sit on the sidewalk. “Stay right there,” she said (as if my father had another option), and then she disappeared into the building. Five minutes later she returned, carrying the cushions from their lanai, a bottle of Pepsi, and a bag of Doritos.

Which is how my parents wound up spending an entire afternoon sunning themselves in a parking lot until my dad found the strength to begin again. Crazy right? Yeah. Crazy good.

But back to Thomas.

Per Mom’s instructions, I went out to the street and saw him coming my way. Thomas didn’t acknowledge me but, as he drew abreast of our house, I spoke up:  “Have a nice day, Thomas.” And I curtsied.

(Having seen The Sound of Music at least three times before I turned eight, I knew how.)

If Thomas was surprised, he didn’t show it. If anything, he looked a bit worried. He probably figured my mother had called his—and that he’d have to face the music when he got home. That’s what most moms would have done, back in the day:  called and tattled. But not mine.

Claire Rundle may have been short on maternal sympathy, but she was long on the Bible. She knew what it said. And whenever anyone tried to hurt her or one of her kids, she always found a way to pay them back.

That’s 1 Peter 3:9. And it worked. Thomas never bothered me after that day; in fact, we became friends. And my mom’s crazy counsel—to repay insults with blessings—has stood me in good stead, over the years. Because what I’ve found is that the more I try to extend kindness to people who hurt or offend me, the better life gets. It’s like grace finds a way to get rid of the sting.

“That’s the ugliest thing I have ever seen.”

I have four children. They’re all grown up now, but I tried to raise them in the spirit of 1 Peter 3:9. I’m sure there were times when they thought I was as crazy as I thought my mom was. I’m sure there were days when they thought I was worse. One year, for instance, they gave me a homemade Mother’s Day card where they’d picked a word to go with each letter in the word MOTHER. Next to the e they wrote EMBARRASSING.

Honestly, though? I didn’t care if they thought I was nuts. I just didn’t want them to miss out on a blessing. And so I encouraged them to invite the mean girl to their party. To bake cookies for our grumpy neighbor when he complained about the noise they made. To pray God’s richest favor over the middle school bully.

I did not, however, ever ask them to curtsy. So there’s that.

But here’s the thing:  Repaying meanness with kindness almost never makes sense, nor is it usually easy. Yet it opens the door to a life full of freedom and blessing—one that refuses to take up an offense—and for that wisdom nugget, I will be forever grateful to my mother.

She and my dad enjoyed their last parking lot picnic back in 2001, the year that my father went to be with the Lord. Mom got remarried several years later—her name is Claire Gilman now—and I love my stepdad. John is just as generous and crazy as she is.

John straightened up. “Well I guess I will put it wherever you like,” he said with a smile. And then he invited the man and his wife over for dinner.

Which is not, to be perfectly frank, what I would have done. But it’s the sort of thing I want to do when someone gets under my skin. And so, even as I ask God to help my children “repay evil with blessing,” I pray that 1 Peter 3:9 prayer for myself:

Lord, make me willing to return kindness for cruelty. Let me meet meanness with love. 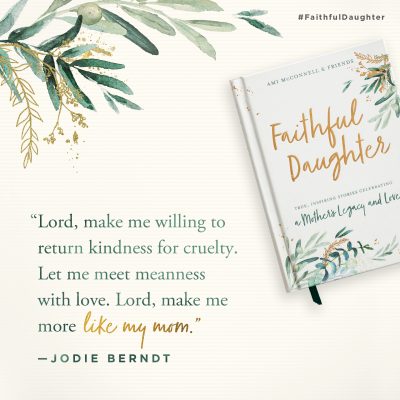