So Sunday night’s Marriage Course kick-off was really good. We had a little trouble with the music, which meant that Robbie had to use his techno-brain to fiddle with the system during the exercises, which meant that I didn’t have a chance to fail any more “how well do you know your spouse” quizzes. It was perfect.

And interesting. We talked about what marriage is (one definition says it’s when you find “that one special person you want to annoy for the rest of your life”), and why it can be so challenging sometimes. Nobody really thinks about the “for worse” part of the vows; when you head to the altar, you’re pretty focused on the “better” stuff.

But then life happens.

You lose a job. Somebody gets sick. You struggle with infertility, or a difficult pregnancy. The bills pile up. The car breaks down. You discover that your white knight leaves dark hairs in the sink. Or grey ones. You get tired.

It doesn’t matter whether you’ve been married for two months or twenty years; there are pressure points during every season. Some couples eventually cave under the load. Others stick it out. Still others find a way to thrive. How do you know what might happen to you?

Shaunti Feldhahn, a Harvard-trained social researcher and the author of a nifty little book called 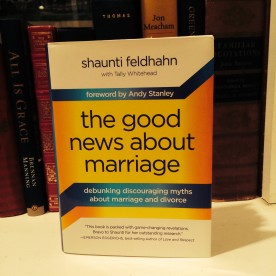 The Good News About Marriage, says that a lot of times it comes down to this:  Do you have a sense of hope…or one of futility?

“A couple could go through a terrible period” she writes, “but if they felt certain they would make it, they usually did.” Even just the hope that things could get better was often enough to inspire them to “do what was needed to right the ship, patch the holes, and keep sailing.”

On the flip side, if a couple thought they were doomed, they often were. A “sneaking feeling of futility” or the sense that things would “never change” would creep in to crippling effect:  “If the ship is going to sink anyway, why bother working so hard to bail it out?”

Fortunately, there’s plenty of reason to hope, based on Feldhahn’s findings.  Need some good news to put the wind back in your sails? Try one of these pearls:

Most marriages are happy. Most couples, given the chance, would do it all over again.

Couples who attend church regularly have a significantly lower divorce rate than those who don’t.

And get this eye-opening gem:  The commonly accepted (and inherently demotivating!) statistic that “half of all marriages end in divorce” is bogus.  The real figure is closer to 20-25% for first-time marriages, and 31% overall.

I don’t know about you, but in a world that seems to slam marriage at every turn, where I meet young couples who don’t want to get married because they think they have, at best, a 50-50 shot, or where older couples slide toward boredom or infidelity (emotional or physical) because mediocrity seems to be “as good as it gets,” this sort of research is a game-changer. I mean, if most marriages are happy, then complaining about yours–without doing anything to fix it–means that you’re missing out. Why not shift gears from futility to hope and see if that changes anything? Heck, why not try going to church?

And speaking of patching the holes…next week in the Marriage Course we’ll shine the spotlight on communication.  You already know I am a gifted interrupter, but if I can manage to keep my trap shut for a few minutes and listen, I will try to snag a few good nuggets to share with you.