Twelve years ago, when we began renovating our home, the bathroom guys cut a giant oval out of a piece of plywood to make a hole for the bathtub.  The kids were young, underfoot, and more than a little interested in the whole construction process.  In an an effort to keep them from firing nail guns at each other or sawing off someone’s foot, I sent them outside with the egg-shaped wood scrap and a bunch of paint and said, “Easter is coming.  Make something.” 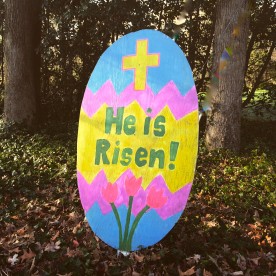 The contractors attached a wooden easel and sharpened the stakes so that the kids’ masterpiece could be displayed in the front yard.  Holy Week was just a few days away, and we hatched what we thought was a brilliant plan:  In the same way that Jesus’s resurrection came as an awesome surprise to his followers, we thought we would “surprise!” our neighbors by thrusting the sign into their yards, all under the cover of darkness.  We taped instructions and a Sharpie marker to the back of The Egg, encouraging each lucky recipient to sign the back and then, the next night, move the whole contraption to a new location as a way to share the love of Easter all week long.

What could possibly go wrong?

Well, for one thing, tub decks are made of sturdy stuff.   The Egg weighs about 70 pounds and, at nearly 6-feet tall, it’s not like it fits comfortably in the passenger seat.  Or even the trunk.

Not only that but, as it turns out, not everyone wants an Easter surprise.

One garden club guru (whose yard is truly spectacular) caught wind of our scheme and assured us that, while she certainly did believe and endorse the “Risen” message, The Egg would be “happier elsewhere.”

A prominent local businessman got up in the middle of the night, spotted the moonlit orb from his bathroom window, woke his wife (“What the heck is that thing??!”), and then literally ran outside in his boxers to remove it, lest any of our Jewish neighbors (who were also his clients) see it on their way to work.

As word spread, husbands everywhere began to regard The Egg with distrust, knowing that it had the power to puncture a pipe and destroy an entire sprinkler system.

And so, to save both relationships and hydrangeas, we made a new plan.

Now we no longer surprise anyone.  Instead, very late on Easter Eve, long after it gets dark, Robbie taps an able-bodied child (this year, it was a fiancé, which is all part of the on-going hazing plan to be sure the guys know what they’re in for with this family) to help him lug the thing out of the garage.  Together, they wrestle it out to the street and set it up on our corner, where – we hope – it will bless the neighbors.  (If they don’t find themselves cheered by the “He is Risen” message, I figure that they can at least be happy that The Egg didn’t wind up in their yard.)

And I like to think it is blessing people.  For years, we’d come home from church and make our kids (and any weekend guests) stand out on the street, posing with The Egg for the Annual Easter Pic. 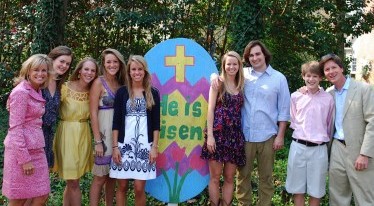 Recently, our neighbors began doing the same thing; this year, The Egg showed up in at least three different Instagram posts. 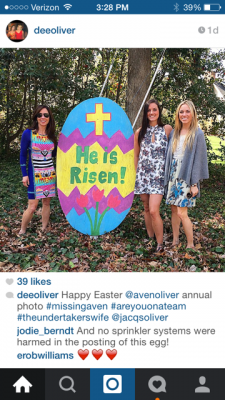 Maybe the neighbors know that time is short.  The wood is splintering, the pointy stakes wobble, and the 12-year-old paint job (which never looked all that good, even to the untrained eye) is starting to look what might actually be considered “bad.”  I doubt that The Egg will see many more Easters.

I’m filing this blog under “Try this.”  For those of you who want to make yourselves an Egg, be my guest.  But for those who don’t (which I would guess might be all of you), the “try this” factor is simply this:  Know that the resurrection doesn’t just pave the way for our eternal salvation.  It also comes with power for daily living, as in right now.  It comes with hope.

Which is certainly worth trying, with or without your own piece of plywood.