With all due respect to the platform, I’m not the world’s biggest Twitter fan. To me, it sometimes feels like a one-liner fight club, where anyone with a handle or a hashtag can jump in and start punching. Like the person who skewered Beth Moore when she encouraged Christians to lighten up and laugh a little. The critic took offense to Beth’s suggestion, noting that it is “not funny when people go to hell.”

(It isn’t. But maybe less of them would if we smiled at them a little more often?)

Still, though, I have a Twitter account. I do this to keep my publisher happy (because I guess nobody reads entire books anymore) and so that I can keep up with U.Va. sports. Especially during basketball season. And Double-Especially during March.

Hands-down, my favorite sports-tweeter (if that’s the right term) is Phony Bennett. He’s a self-described “fake coach” who borrowed the real coach’s name to create his Twitter persona: @IfTonyTweeted. (He doesn’t.) And like the real Tony Bennett (who has built his U.Va. teams on humility, passion, unity, servanthood, and thankfulness), Phony’s tweets rest on five pillars of their own: Humor, sarcasm, self-deprecation, trash talk, and school pride.

Phony hails from Virginia Beach. I actually met him once at a U.Va. event (where some overzealous Twitter fan pre-maturely unmasked him), but he’s been anonymous to most of the rest of the world until this week, when he revealed himself on UVAToday. And honestly? It was a mighty fine week to come out. It’s the ACC Tourney, our guy Isaiah made the Sports Illustrated cover, and on Monday, the U.Va. Men’s Basketball team (after starting the season unranked) earned a unanimous #1 ranking from all 65 AP Coaches–an accord due, at least in part, to U.Va.’s incredible, unforgettable game against Louisville.

Had this contest been played in February, things might have been different. But it was Day One of March, and clearly the basketball gods (and for those reading on Twitter, that’s a lower-case “g,” so don’t hate me) were ready to rumble. The Washington Post provided my favorite end-of-game recap (complete with video highlights, and with a headline that starts Hahaha), but if you don’t have time for that whole piece right now, here’s my own version:

Me (getting into the car at the airport, after speaking in Nashville): Why aren’t you listening to the U.Va. game??

Robbie (who had pulled up, curbside): We’re getting killed by Louisville. I can’t take it anymore.

Me (mumbling something less-than-edifying, something you might read on Twitter): I think we’ll come back. Turn it on.

And by the time we pulled into our driveway, U.Va. had come back. With 4:12 left, we were down by just 7. And by the time the clock ticked down to .9, we’d cut it to 4. (Let me just say that again: With .9 seconds left, we were losing. By 4.) And then, thanks to an utterly improbable combination of missed shots, fouls, and violations by both teams, we…won.

Of course, I woke up the next day and checked Phony’s take: 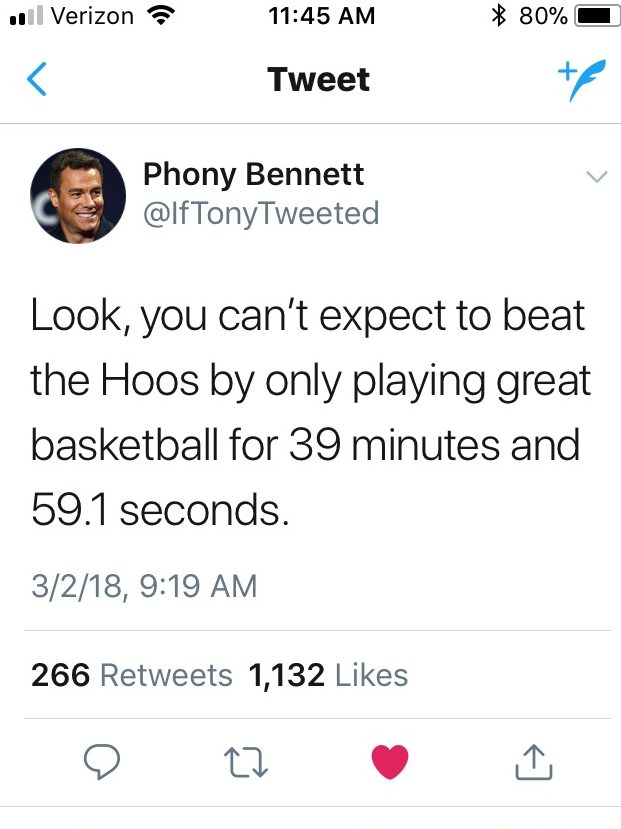 Isn’t that a great summary? And you know what I thought, when I re-read that tweet? I thought of Jesus, and the Parable of the Workers in the Vineyard.

(Because really, who wouldn’t?)

Maybe it’s just me, but a lot of times when I watch U.Va. Basketball, I think about God. I wish there were a market for Bible/Sports Commentary; I’d want a sideline press pass. Because every year (at least for U.Va. fans) there’s so much good material.

In 2015, for instance, a key takeaway was that we needed to trust God as our coach, instead of relying on our own understanding.

In 2016, the game taught us to throw off distractions and live life to the full. To get out there, as Coach Bennett put it, and “play free.”

And last year, NBA star Malcolm Brogdon came back to JPJ and let us all know that love never fails.

As to this year….

This year I’m sure there will be more gold to mine, but so far, that Louisville game takes the prize.

Because in life, just like in basketball, it’s not just about how you play. It’s about how you finish. You can stink it up the whole time–and U.Va. certainly did–but if, at the end of the day, you surrender to Jesus, you win.

Sure, some people will complain about that. If I were a Louisville fan, I know I would. Their guys played hard–and well–for a very long time. They deserved to get more than U.Va. did. But isn’t that just like the workers, back in Jesus’ day? The ones that did time in the vineyard?

You remember the story. A landowner needs help with his grapes, so he goes out early in the morning and recruits some workers, telling them they’ll get a denarius (that is, a day’s wages) for their toil. Then, at 9:00 a.m., he sees some more guys hanging around, doing nothing, and he hires them too. Same thing happens at noon, and at 3:00 p.m. And then once more at 5:00.

When evening comes, the landowner pays the last pick-ups first. And when they see those 5 o’clock guys get an entire day’s pay, the earlier people are pumped. They figure they’ll get much more, since they’ve worked so much longer.

But no. Everyone gets the same thing.

And, people being people, the early guys start to grumble. They don’t think it’s fair.

But here’s what the landowner says: “I am not being unfair to you, friend. Didn’t you agree to work for a denarius?  Take your pay and go. I want to give the one who was hired last the same as I gave you. Don’t I have the right to do what I want with my own money? Or are you envious because I am generous?”

Isn’t that awesome? Jesus used this parable to teach us that, at the end of the day, it’s not our good life or our hard work that matters. It’s God’s grace. And our God is generous. He doesn’t want to leave anyone out and so, even if we wait the whole 39 minutes and 59.1 seconds to turn to him, he gives us the win.

Do I recommend playing like that? No. Life tends to work better (and with less painful consequences) when you “play well” the whole time. As does basketball. But none of us can do that. We’re all gonna blow it in one way or another, in big ways and small.

So here’s the thing: If you find yourself down, or feeling like God could not possibly love you, given the way that you’ve played, it’s okay. He does. He’s crazy about you, in fact. And to God, .9 seconds is more than enough time to redeem a whole life.

If you’ve stuck with me thus far, you might be scratching your head. Like, you might be happy that U.Va. won, but you feel bad for Louisville. So do I. And so did Tony. In the post-game interview, Coach Bennett said he was “so thankful” for the win, but that he felt “pain” and “compassion” for the Cardinals. We get that.

But basketball is basketball and life is life. And thankfully, in life, we all get the chance to cut down the nets.

All we have to do say yes.

Thanks be to God! He gives us the victory through our Lord Jesus Christ. (1 Corinthians 15:57)