I wasn’t much of a Girl Scout. I finished my stint with the Brownies, but no sooner had I graduated to the green dress with the awesome badges-sash when my mom (who was a Den Mother) suggested that I might quit. I don’t think it was the prospect of cookie sales that damped her enthusiasm (we loved those, still do); all I can think is that maybe she made one-too-many sit-upons: 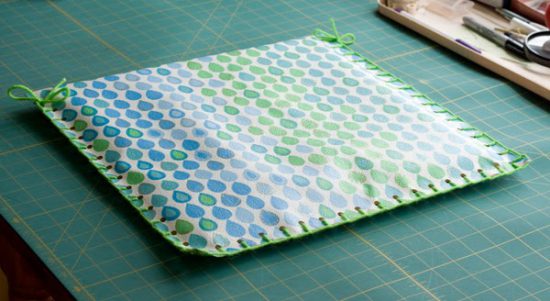 We made them – lots of them – to take along on our Big Camping Trip. But, for reasons that were never entirely clear to me, we never actually went camping. We went to the library. Where the sit-upons worked just fine.

All of which is to explain why I can read, but I cannot build a fire. The closest I ever came to having to build one for myself was in college, when a few girlfriends and I decided to skip the mayhem that was Fraternity Bid Night and go camping. Armed with a tin of Jiffy Pop and a bottle of wine, we drove to the outskirts of Charlottesville, parked our car on the side of the highway, and started hiking. Never mind that we didn’t have any wood (or, for that matter, any sit-upons); we had an entire semester’s worth of unread Wall Street Journals we’d subscribed to for an Investments class, and they burned remarkably well.

All of which is to further explain why, when it got cold this year and I threw a log into the fireplace, my husband looked at me like I was crazy.

“What?” I said. “I am going to put some newspaper in there. What’s the problem?”

“You can’t burn one log by itself,” Robbie explained. “You need a bunch of them.”

Robbie grew up on a farm. He lived in a drafty old stone house with charming fireplaces that a smallish person can actually stand up in, and his fire-building prowess (coupled with his ability to drive in the snow, which no boy I had ever dated could do) had me smitten from Day One. And so, when he said I needed more firewood, I knew better than to challenge his wisdom. I added more logs. 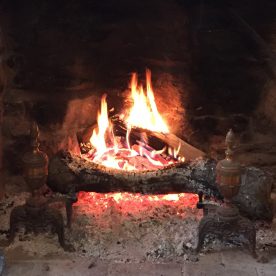 And maybe this is a stretch, but I couldn’t help but think about fire-building when I read this from @DailyKeller on Twitter:

If we are made in God’s image, and He is three persons – then at our fundamental core we are made for community.

I know Tim Keller is a big City Boy now, but I’m guessing that he has been camping. Or that he grew up on a farm. Because even though he doesn’t come right out and say it, I think what he really means is that people are like firewood. We can sputter along on our own, but if we want to realize our full potential – if we want to burn brightly and well – we need to spend time with other people, people who will ignite our faith and kindle our understanding of God and his purposes.

People with whom, and through whom, we can get to know Jesus better.

Do you have friends like that? If not, ask God to give you some. He’s the one who originally said it wasn’t good for us to be alone (Genesis 2:18), and that we are supposed to sharpen each other (Proverbs 27:17).  He knows that we flourish in community. Here’s how he puts it in Ecclesiastes 4:9-12:

Two are better than one,
because they have a good return for their labor:
If either of them falls down,
one can help the other up.
But pity anyone who falls
and has no one to help them up.
Also, if two lie down together, they will keep warm.
But how can one keep warm alone?

Two are better than one. We are created for community. And friendship, I think, is a blessing that God wants to give us.

Sometimes, though, the connections he ordains don’t look like we think they will. Be alert to the unexpected, life-giving friendships that might be in store for you this year.

And don’t be afraid to pursue them. Perhaps you know an older person who loves the Lord, and who might be willing to mentor you in the coming year. (It can’t hurt to ask.) Or maybe your church has a Bible Study or an Alpha Course you could join. Or maybe you’re feeling ambitious enough to start your own group. You could invite a few friends to come over and try one of Rick Warren’s Bible Study Methods, or maybe do one of the online studies offered by the gals at Proverbs 31 Ministries.

And wait. I just had another idea.

If you home or apartment is small, and you don’t have enough chairs for everybody, you could just go ahead and make your own sit-upons. It’s easy. All you need is a couple of vinyl tablecloths, a hole punch, some yarn, and that stack of old newspaper you’ve been meaning to burn…

(And okay, so while you’re making new friends and punching holes in your tablecloths, I’m gonna be taking a little vacay. I’ll still post Friday prayers, but the mid-week blogs won’t show up again until early February. Until then…lots of love! – J.)