So I finally looked at the calendar. Did you know Thanksgiving is less than two weeks away?

Yeah. You probably did. But I’m not quite there. In fact, I didn’t even think about the holiday until I ducked into T.J. Maxx a few days ago to see if they had any “Give Thanks” paper goods. I wanted some cocktail napkins for the buffet, and maybe some hand towels for the guest bath. Because nothing says “gratitude” quite like a printed paper towel.

T.J. Maxx is a holiday wonderland. But not for Thanksgiving. They’re all decked out for Christmas. I know their slogan says how they have “new merchandise arriving daily,” but honestly? I don’t think you could fit one more reindeer in there.

Not knowing what else to do, I flagged down a saleslady. “Do you have any Thanksgiving decor?”

She looked at me blankly, like maybe she’d never heard of the feast. Or like I wanted her kidney. Clearly, I was a couple months late.

And then I sat in my car and wondered how I got so behind. Maybe it was all of that arduous Facebook training. Maybe I just over-blog. Or maybe I watch too much football (and if it’s U.Va., you stay for the whole game, regardless of the score, because #loyal). I don’t know. But whatever the reason, I figured the answer was clear.

I had to move faster in life.

No sooner had that thought formed in my brain than another one entered my head. And this one sounded a whole lot like God.

Maybe it’s the fact that I was staring at two painted Santas, or maybe it was the Holy Spirit, but for whatever reason, I suddenly thought of my dad (who liked the Holy Spirit way more than he liked St. Nick, but his mom was a big Santa fan, and those things leave a mark). Either way, I remembered coming home one day, after Dad had been babysitting three-year-old Hillary.

He told me he wasn’t sure what she’d meant, but he said that that would be fine. And with that, my girl had climbed onto his lap, put her head on his chest, and fell sound asleep. It was something that all our kids did. And Dad loved it. 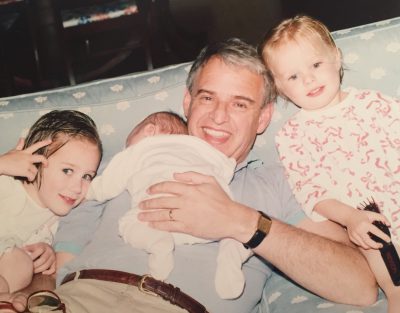 He loved it for the obvious reasons (and seriously, what’s better than having a little one do that?), but he loved it even more because he was a man who knew his Bible. And when Hillary fell asleep on his chest, Dad told me it reminded him of Deuteronomy 33:12.

Which (and I’m just putting this out there) I had to look up.

Let the beloved of the Lord rest secure in him,
for he shields him all day long,
and the one the Lord loves rests between his shoulders.

“When God invites you to rest between his shoulders,” my father explained, “he is talking about resting on his chest.”

(Now, I have never seen that claim repeated in any Bible commentary, but when your dad tells you something is so, you believe it. And I did.)

And sitting there in the TJ Maxx parking lot, I knew God was right. I did not need to move faster; I needed to move different. It wasn’t like God was telling me to come to a full and complete stop (he invented Christmas, after all, and I’m pretty sure there are parts of the hype that he likes). Instead, I felt like God was inviting me to enter in to his presence in the midst of the mayhem, to spend time with him, to be refreshed.

To climb up on his chest and just put my head down.

And if you are beloved of the Lord (and you are), that’s his invitation to you too.

Which is something that some folks will welcome. Others (and don’t make me name names) will read that and stress out. “I can’t stop,” you will say. “I’m too busy. My in-laws are coming. And that cranberry chutney won’t make itself.”

But let me encourage you with this one little thought: Matthew 6:8. Your Father knows what you need before you ask him.

You guys, this is true. God really does know. And when we take time to listen, he always provides. Take, for example, my own situation.

There I was, napkin-less, with the biggest family holiday of the year looming in just under a fortnight (Michelle, that’s for you). And then I got a text from my friend Deb:

“We have napkins, half price, at the Lemon Cabana. I thought you might need them for your family.”

I will show you these napkins in just a sec. But what you need to know first is that U.Va. is – and I can’t type it without smiling – bowl eligible. I know all my SEC friends are like, “Yeah, yeah. What’s your point.” But you Wahoos out there…aren’t we grateful? And, knowing that Thanksgiving weekend brings the biggest game of them all – the game where, for the past more than one year we have gotten beaten by a team whose fans pull into the parking lot in RVs with names like The Rolling Turd – you will understand me when I say that God knew exactly which napkins I’d need. He knew I’d need more than “Give Thanks.”

Because I have two sons-in-law, plus their families, who are major Virginia Tech fans. And when we see them at Thanksgiving, and they help themselves to a drink, I don’t want them to simply be grateful. I want them to know it’s 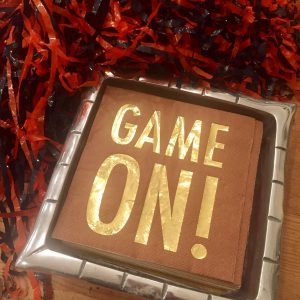