Last week, I told you about Mark Forsyth’s book, The Elements of Eloquence, in which he maintains that Shakespeare’s brilliance was rooted more in his ability to use literary tricks and techniques than in any sort of innate genius. One such technique is anadiplosis.

Anadiplosis won’t pass your computer’s spell check (I tried), and I doubt it’s something you’ll want to break out at a cocktail party, but it’s a good trick to know, particularly if you want to sound logical, progressive, or just well-balanced. Anadiplosis happens when you take the last word of a sentence or phrase and then use it to begin the next one:  A man takes a drink. The drink takes a drink. The drink takes the man.

Or consider this example, from Paul:

Not only so, but we also glory in our sufferings, because we know that suffering produces perseverance; perseverance, character; and character, hope. (Romans 5:3-4)

I wasn’t thinking about anadiplosis when I went hiking recently. I was, however, thinking about suffering. I’m not much of a woods-and-squirrels girl, and I hadn’t intended to hike Sewanee’s 20-mile Perimeter Trail (or any part of it) when I started. My plan was to walk to a nearby overlook and…look over. 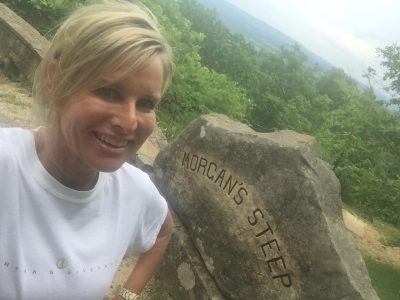 But then I noticed a trail map, conveniently posted next to the overlook. I had some time and I figured I could do a little bit of the trail. Like a mile, maybe. I could always come back later for the other 19.

Not being an experienced hiker (not being any sort of hiker), I didn’t bother to read the fine print. I saw the jagged emblem that meant “Difficult”…but how difficult could “Difficult” be? It was only a mile, for crying out loud. I’d be in and out in 15 minutes. 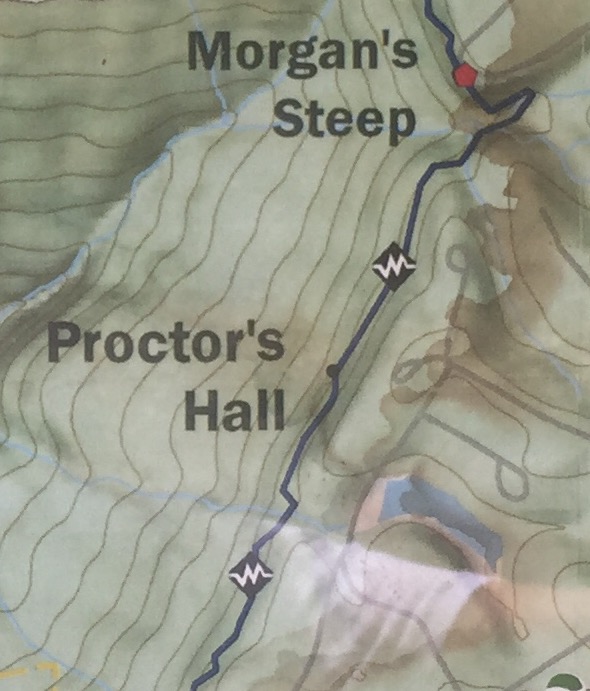 At first, I was captivated. To my left was a giant rock face. To my right was a 50-foot drop, just daunting enough to make you pay attention. 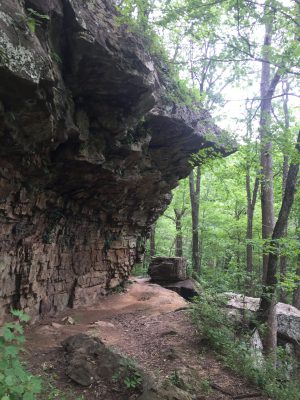 Everything was quiet (unless you count the sound of scurrying, which I tried not to). Peaceful. I felt like I was alone in the world.

Which, after about ten minutes, started to be less fun.

Nobody knew where I was, I hadn’t brought along any hiker stuff like water, and I didn’t need my Garden Club membership to help me identify the horticulture that grew, with unmitigated vigor, all over the trail: 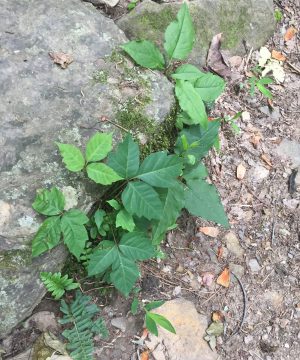 I was just starting to think about mountain lions (I knew they’d found the bones of a prehistoric saber-toothed tiger nearby; might he or she have left any grandchildren?) when I rounded a bend and saw this: 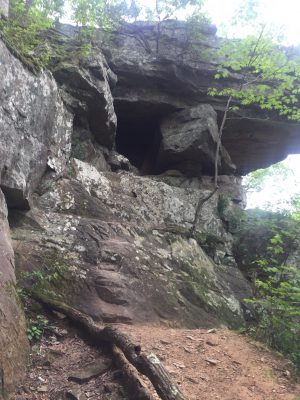 A hole in the trail. Through a rock. Which was high.

Going up seemed out of the question. The opening was a good 15 feet above the trail (closer to 30, if you count the dirt part), and it was pretty much straight up, with no hand- or foot-holds I could detect. (You would think someone might put in a rope.)

I tried going around, but there was no trail to the right. Just a sheer, poison-ivy-coated drop into nothing but treetops.

And I thought about turning back. But honestly? That felt like quitting. Plus, I knew other moms who had done this part of the hike. (Or so they said.)

To put my predicament in perspective, I’ve marked up the photo for you. The red arrow is where I needed to get. The red person is me. And I look a lot taller (and more athletic) in the drawing than I am in real life: 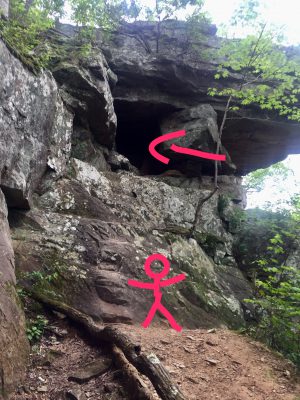 And here’s the thing. I am not afraid of heights, but I am not big on falling. And I had no idea what was on the other side of the hole. Was it an even steeper drop?

I started to turn around. But then this thought came:

Seriously. Out of nowhere. I didn’t know about anadiplosis, but I did know that verse and where it went. I knew that if I started at suffering and got through the whole thing (not to mention the hole thing), I’d wind up at hope.

I decided that since I had already experienced some pain (and on a happy note, the very real presence of snakes and mosquitoes took my mind off of the unseen lions and tigers), I could go ahead and move into the perseverance phase. Which felt good, since it meant that I had accomplished something. Or God had, in me. And if he would grant me the courage I needed to climb up to the hole, I was ready to count that as character.

I sent a text to Robbie (which I didn’t think would go through) and a prayer to God (which I was pretty sure would), wanting them both to know where I was, in case things went bad. And then I started climbing.

I made it. (Obviously.) And when I crawled out of the hole on the other side of the rock, I had three rewards.

The first was a nice, flat path: 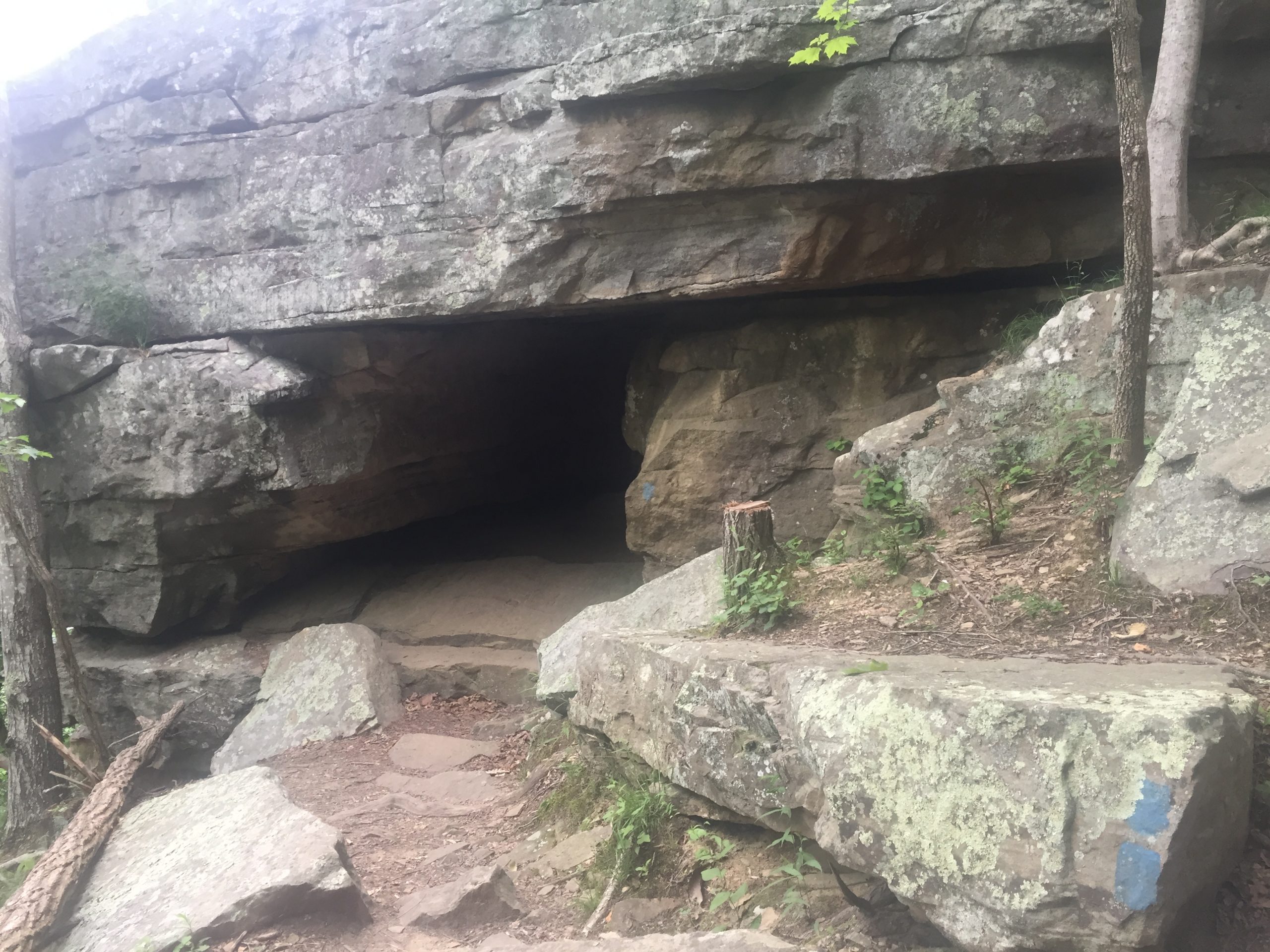 The second was beautiful waterfall: 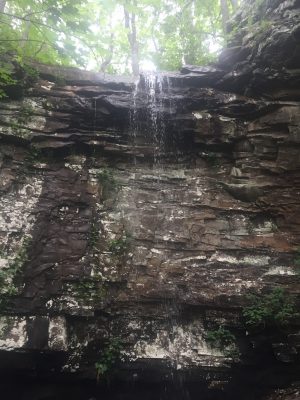 And the third was the end of that part of the trail, which literally dumps you out at the foot of the cross: 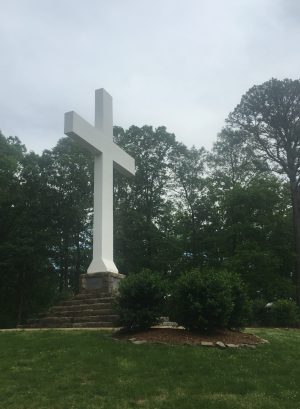 I can’t remember when my heart felt so full, or so grateful. And, I realized, I would not have appreciated the cross (or the hope it delivered) had I not spent that time on the trail. Walking through fear – and coming to the place where my own strength wasn’t enough, where my only two options were to turn back or go forward with a God I couldn’t see instead of a rope that I could – is what brought me to hope.

All of which is to say…

If you are in a season of suffering (even if it’s just a mile’s worth of scary stuff), keep going. Don’t turn back. Just put one foot in front of the other because that’s what kindles perseverance, a “steady persistence in a course of action, a purpose…especially in spite of difficulties, obstacles, or discouragement.”

And remember, you’re not alone. Count on God to strengthen your character. He gave me courage; he will supply what you lack. He will lead you to hope.

I wish I had a clever way to use anadiplosis to wrap up this post, but I don’t. All I can do is repeat what Paul said – that suffering produces perseverance; perseverance, character; and character, hope – and then point to the conclusion Paul draws: And hope does not disappoint us, because God has poured out his love into our hearts by the Holy Spirit, whom he has given us.

I don’t know what the literary term is for that last sentence; if I ever meet Mr. Forsyth, I’ll ask him. For now, though, maybe we can just call it a “happy ending.”