Back when I started blogging three years ago, the website brainiacs told me I needed to lump my posts into “categories.” So I did. And I feel pretty good about “From the Bookshelf” (where I recommend some of my favorite reads) and “Prayer Helps” (which features scripture prayers and other tools), but the “Try This” category is sort of hit-or-miss. Long-time readers will remember the Mac-n-Cheese and Peas and Fleas failure, and I still get occasional emails from people who tell me that it didn’t go so well when they put Grandma under the sheet.

Today, though, I think I have a “Try This” winner. Not only has this one stood the test of time by serving as an anchor to the past, but it provides a launching pad for things like hope and security as we look toward the future.

Make yourself an Ebenezer stone. Like the one in the second stanza of “Come Thou Fount of Every Blessing” (the one that made some contemporary worship leaders change the lyrics, since nobody knew what they were talking about).

Now, I realize that when we hear “Ebenezer,” most of us think of Scrooge. But he wasn’t the first Ebenezer. Nearly 3,000 years before Charles Dickens tried to get Londoners to provide for the poor with A Christmas Carol, the prophet Samuel tried to get the Israelites to acknowledge God as their provider by setting up an Ebenezer stone. If you are fuzzy on the details, here’s the story (and you can read more in 1 Samuel 7):

The pesky Philistines had come to attack the Israelites (again), and the Israelites were scared. They didn’t have a king yet, so they turned to Samuel. “Do not stop crying out to the Lord our God for us, that he may rescue us from the hand of the Philistines,” they begged. Samuel agreed. But that didn’t stop the Philistines from advancing; they “drew near” while Samuel was praying! But then something wild happened: The Bible says God “thundered with loud thunder.” As a result, the Philistines panicked, the Israelites gave chase, and the end result was what has to be one of the most epic (an unexpected) upsets in history. To commemorate the victory, Samuel set up a stone and named it Ebenezer (which literally means “stone of help”), saying, “Thus far has the Lord helped us.” 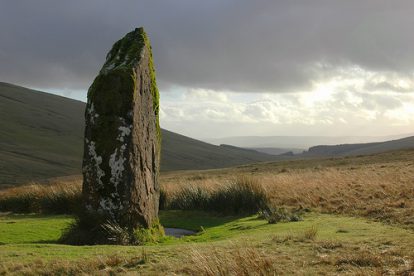 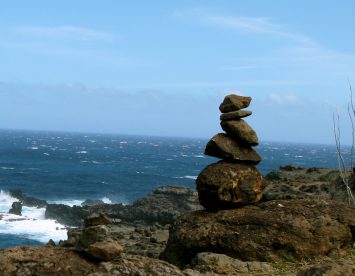 Who knows? But how the stone looked isn’t the point of the story. The point is that the stone served as a marker, a place the Israelites could return to in the years to come, a reminder of how God had fought for them and protected them in their darkest hour.

We can do the same thing. When God does something for us, we can take a rock (it doesn’t have to be big) and make our own Ebenezer. I did that earlier this year, when Robbie transferred to U.Va. I thought he knew all about the school (we’d taken him there since before he could walk), but I was wrong. Robbie knew all about the football stadium. The library? Not so much. He had to find that, and then he had to go looking for all of his classes, his advisor, and a host of other unfamiliar people and places in what turned out to be a big and sometimes daunting world.

Robbie is a surfer, and I guess those first few weeks were a little bit like paddling out through the breakers, trying to get to the smoother part of the ocean, where things settle down and you can wait to catch your wave. And when he did – when Robbie finally texted us with some good news and we felt like he was maybe hitting his stride – the words “thus far the Lord has helped us” just popped into my mind. So I found a stone (a smooth one from the beach, which seemed appropriate for my boy) and marked it: 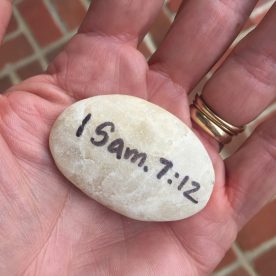 On the flip side, I put the date: 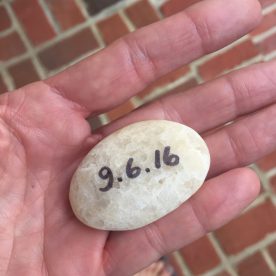 In years to come, Robbie might never remember what was happening in his life in September of 2016, but he will know that the Lord was right there with him, helping him paddle through the waves.

I love the story of the Ebenezer stone. I’ve made them before, and I am sure I will make them again. I have a spotty memory and my heart is prone to wander, so I need those tangible reminders of God’s faithfulness – both so I can thank him and so I can look forward with hope and confidence, no matter what the future holds. The God of “thus far” is the God who “ever shall be,” and to me, that is exciting.

And you know what’s even more exciting? We might not have a Samuel in our corner, but we have Someone even better. The Bible says that Jesus is praying for us, right now. Romans 8:34-35 says that he always talks to God about us – and that nothing can separate us from his love! So even when we aren’t sure what to pray (like, when we don’t know which direction our Philistines are coming from, or what we should do when they attack), we can count on the fact that God already has us covered.

And that right there is enough to make me head back to the beach to find some more stones.