I come from a long line of Scrabble players.

My mother, an English professor who has her Ph.D. in Instructional Technology (which is really a thing), is a family champion, as was her father (also a Ph.D. prof) before her. Even my own dad—who was more into numbers than words—got pressed into action at the family game table. And when brain cancer meant that he could no longer sit up comfortably, he still played—albeit while lying flat on the floor and using words that didn’t always have vowels. 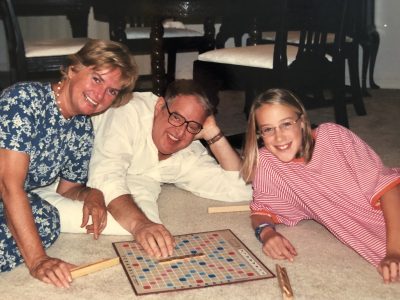 (We decided they must be Russian vocab, and that Dad could therefore keep all his points.)

And so I read with great interest the recent Wall Street Journal article claiming that men are better than women at Scrabble. My first thought was that they had not met my mom. But then I dug deeper. “Championship Scrabble,” the columnist noted, “rewards typical male obsessions:  strategy, math, a passion for competition, and a drive to memorize facts.”

I don’t know about the male drive to memorize (Robbie is working on Philippians 4:4-6 right now for my mom’s Christmas gift, and I don’t think it’s going so well), but my man is definitely all about strategy, math, and competitive play. And nowhere, perhaps, are these traits more evident than during the holiday season, when his Buddy the Elf side comes out and he hangs Christmas lights like he owns the power company. 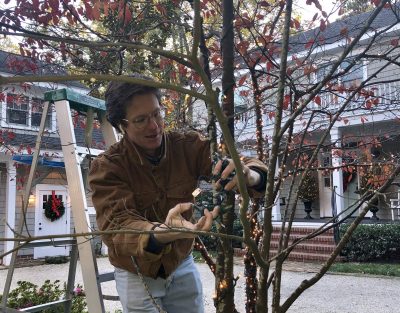 But I’m getting ahead of myself. Back to the Scrabble research.

When I got to the last line in the column, which stipulated that men and women are, in fact, different, I was like: “Um, hello? Any wife with a husband knows that.”

Consider our house, on Black Friday.

Robbie and I were all set to take advantage of the holiday deals. First, though, I had to put away all the platters and silver from our Thanksgiving meal. Which is when I noticed the pile of 14 damask napkins that had to go in the wash. (They’d need ironing, too, but I’d get to that later.) I hit “start” on the washing machine and pulled the brunch fixings out of the fridge so I’d be ready when the children showed up. And remembered I’d promised to make shortbread for a neighbor’s party, later that night. So I preheated the oven–and realized that the amaryllis bulbs (the ones I had timed to start blooming near Christmas) had been neglected during all the Thanksgiving prep. I gave them some water, pulled out the butter and the cookie cutters, and started in on the shortbread.

I got the dough in the oven, moved the napkins to the dryer, and opened my laptop. Oh my. There were dozens of Black Friday emails–plus a few from actual people I knew. I handled the real people first, and then started scrolling the sales. I saw where Target had everything discounted by 15%. Ballard Designs offered 30. And J. Crew was telling me that their entire site was half off. Even Home Depot had Cyber Savings Galore – did I need anything there?

I didn’t. At least nothing I could think of, in between the napkins, the shortbread, and the wondering if anyone on my list needed a new J. Crew scarf, or maybe a ceiling fan from Home Depot.

Twenty-eight minutes later (and I am not making that up), Robbie was back, having purchased 28 boxes of lights. Me? Let’s just say I did buy a gadget my son-in-law wanted, but I am pretty sure that I paid the full price.

So what’s my point?

My point is that we don’t need a Scrabble championship to tell us we’re wired differently. I’m not trying to be all gender-y and political; I’m just saying I’m grateful. I mean, had I gotten in the car on Black Friday and gone out to Lowe’s, I might still be in the plumbing parts aisle. But not Robbie. My man has the eye of the tiger.

So again, what’s my point?

I guess what I want to say–and how I want to encourage us–is that this holiday season (and I am speaking mostly to the ladies here but guys, this applies to you, too), when our spouse (or our child) makes us a little bit cray-cray or we don’t understand what they’re doing (like when my friend’s husband spent Thanksgiving Day napping, all  dressed for dinner and sleeping fully upright on the sofa so as not to wrinkle his khakis, and then happily told her, later that night, that this was “the least stressful Thanksgiving ever!”), let’s not get our undies all up in a wad. Instead, let’s find a difference that makes us grateful, and celebrate that.

I’ll go first, since the Scrabble thing is fresh in my mind.

I really am thankful that Buddy’s strategic. He tried out a new light method this year, and actually sent in-process pics to the family for feedback: 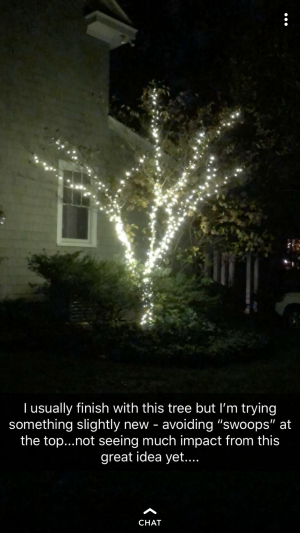 I also love how much my guy gets jacked up about math. Sure, Robbie’s been known to balk at a $5 cover charge, but it’s only cuz he’s saving up for the light show. He calculates lights-per-bush numbers and divides them by strands, factoring in the difference when you use the 100-count vs the 50. (SAT prep, eat your heart out.)

And competitive? Let’s just say that while I don’t think Robbie is trying to outshine our neighbors (we couldn’t), I did see his chin quiver just the tiniest bit when we turned on the TV Wednesday night. That’s when they lit up the Rock Center tree… 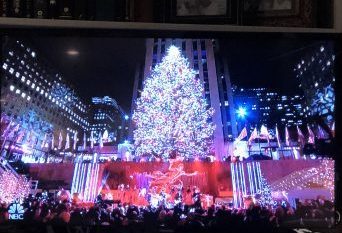 It was spectacular. And on Thursday, Buddy might have even gone back to Lowe’s…

Thank you for the glorious variety that marks your creation! May we celebrate and rejoice in those differences!

Help us be devoted to one another, honoring one another above ourselves. And may we always give thanks for each other, growing in faith and increasing in love for our family and friends. (Romans 12:10, 2 Thessalonians 1:3)