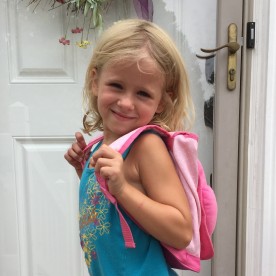 It’s back-to-school time, and I guess every household has their own “get ready” ritual.

If you’ve got little ones, you’re probably tucking things like glue sticks and scissors into pint-sized backpacks. (Niece Elizabeth, pictured here, is swapping her stylin’ pink bag for a much more grown-up version this year, a light blue number that features little white hearts.)

If, on the other hand, your kids are college-bound, they are probably stuffing a laptop, a few cans of Spaghettios, and a set of XL twin sheets into a Hefty trash bag.

That’s if they are a boy.

If they are a girl, there’s just no telling. You might have a daughter like Virginia, who couldn’t have imagined heading off to college without pretty much everything she owned, including her six-inch snakeskin heels, 60 pounds worth of high school yearbooks, and a sombrero (“What if they have a Fiesta?”). Or you might wind up with a Hillary, whose back-to-college strategy usually involved staying at the beach until the last possible second and then heading up the road, still in her bikini, with-or-without a backpack. Or a hairbrush. Or shoes.

Regardless of your child’s particular back-to-school style, consider packing a few prayers in the send-off. Here are ten of my favorites, simple one-liners that come equipped with the power of God’s Word:

Whatever ____ finds to do, let her work at it with all her might, as working for you, Lord, rather than for other people. (Colossians 3:23)

Surround ____ with friends who will sharpen him the way that iron sharpens iron. (Proverbs 27:17)

Clothe ____ with compassion, kindness, humility, gentleness, and patience, and let her forgive whatever grievances she may have against others. (Colossians 3:12-13)

You’ll find hundreds of prayers just like these in Praying the Scriptures for Your Children and Praying the Scriptures for Your Teenagers. If you don’t have these books, just grab your Bible and ask God to show you a few verses that you can turn into prayers for your family. You might even tuck one of ’em into a lunchbox, or tape it to the can of Spaghettios. (My own dear mother used to write prayers on cantaloupes and send them to my dorm at U.Va.) You might get an eyeball roll…but at least your kids will know they are loved.