I know Mother’s Day is still more than a week away, but when it comes to Major Holidays, you don’t want to wait too long to start celebrating. (At least that’s what I tell my kids.) Plus, I’ve been thinking about my own mother and how grateful I am for all the lessons she taught me–including the upside-down blessing that comes with repaying insults with love. Thanks, Mom…and Happy (almost) Mother’s Day! ❤

I could hear him back there, bouncing his basketball. We were on our way home from elementary school, together and yet not. Peter (the coolest boy in the whole third grade) walked twenty feet behind me. I didn’t look back.

Suddenly, the bouncing stopped. A split-second later, I felt the breath leave my body. Peter had thrown his ball and—since he was also the most athletic boy in third grade—it had hit me, square in the back.

Three blocks later, I burst through my front door. “Mom!” I cried through my tears, “Peter Mayfield [not his real name] just hit me in the back. With his basketball!”

“Jodie,” she said, “Peter will be walking past our house in about one minute, and when he goes by I want you to say, ‘Have a nice day, Peter.’

“And then…I want you to curtsy.”

I know what you’re thinking. You’re thinking that my mom sounds a little bit crazy. And she is, in a crazy-good kind of way.

Like, when my 61-year-old dad was battling brain cancer and lacked the strength to get from the car to their condo, she told him to sit on the sidewalk. “Stay right there,” Mom said (as if my father had another option), and then she disappeared into the building. Five minutes later she returned, carrying the cushions from their lanai, a bottle of Pepsi, and a bag of Doritos.

(Which is how my parents wound up spending an entire afternoon sunning themselves in a parking lot.)

But back to Peter.

Per Mom’s instructions, I went out to the street and saw him, coming my way. Peter didn’t acknowledge me but, as he drew abreast of our house, I spoke up: “Have a nice day, Peter.”

(Having seen The Sound of Music at least four times before I turned eight, I knew how.)

If Peter was surprised, he didn’t show it. If anything, he looked a bit worried. He probably figured my mother had called his—and that he’d be hearing about his behavior as soon as he got home. That’s what most moms would have done, back in the day. That’s what all moms would probably do now. But not mine.

Claire Rundle may have been short on maternal compassion and sympathy, but she was long on the Bible. She knew what it said. And whenever anyone tried to hurt her, or one of her kids, she always found a way to pay them back.

That’s 1 Peter 3:9. And it worked. Peter never bothered me after that day; in fact, we became friends. And my mom’s crazy counsel—to repay insults with blessings—has stood me in good stead, over the years. Because what I’ve found is that the more I try to extend kindness to people who hurt or offend me, the better life gets. It’s like grace finds a way to get rid of the sting.

You know, if you’ve been around this blog for awhile, that I have four children. They’re all grown up now, but I tried to raise them in the spirit of 1 Peter 3:9. I’m sure there were times when they thought I was as looney as I thought my mom was. I’m sure there were days when they thought I was worse. One year, Annesley gave me a homemade Mother’s Day card where she’d picked a word to go with each letter in MOTHER. Yeah. Check out that E. 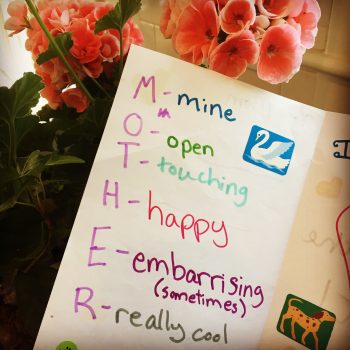 Honestly, though? I didn’t care if my kids thought I was nuts. I just didn’t want them to miss out on a blessing. And so I encouraged them to invite the mean girl to their party. To bake cookies for our grumpy neighbor, when he complained about the noise that they made. To pray God’s richest favor over the middle school bully.

(I did not, however, ever ask them to curtsy. So there’s that.)

But here’s the thing: Repaying meanness with kindness almost never makes sense, nor is it usually easy. But it opens the door to a life full of freedom and blessing—one that refuses to take up an offense—and for that wisdom nugget, I will be forever grateful to my mother.

She and my dad enjoyed their last parking lot picnic back in 2001, the year that my father went to be with the Lord. Mom got remarried several years later—her name is Claire Gilman now—and I LOVE my stepdad. John is just as generous and crazy as she is.

John straightened up. “Well I guess I will put it wherever you like,” he smiled.

And then he invited the man and his wife over for dinner. 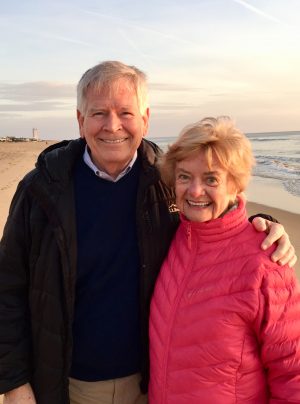 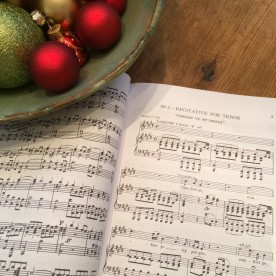 Well, tonight’s the night. Tonight’s the night that we dust off our Messiah handbooks and haul ourselves off to Virginia Beach’s Sandler Center for the Performing Arts, where a quartet of talented soloists will join forces with Symphonicity to present Handel’s Messiah. And, in what might be the most charitable gesture of the season, they will let people like us sing along.

This will be Symponicity’s 32nd Messiah performance. I figure we’ve been to at least half of ’em; it’s what my mother wants for Christmas every year. She doesn’t seem to care that the lowest grade I got in college was in a course called Music Appreciation. I’d tell you how my kids really feel about the annual event, except that my mom is probably my most faithful blog reader. Suffice it to say, we will don our gay apparel (and yes, there was a year when I wore “the sweater”), clear our throats, and let ’er rip.

And it won’t be pretty. I made my kids take piano lessons (as did my mother before me, and her Juilliard-trained mother before her), but almost none of it stuck. And it’s not just words like allegro (which is not, as it turns out, a pasta dish) that mess us up. We don’t always get even the English words right. For years, Hillary lifted her sweet little soprano voice and warbled, Come for tea! Co-o-ome…for…tea! Little did she know that Handel wasn’t into Earl Grey; he was drawing from Isaiah 40, proclaiming the tender and redemptive “Comfort Ye” power of God.

So why, if we can’t read music and we don’t even sing the right words, do we go to this thing every year?  Maybe it’s because of verses like Ephesians 6:2-3, which remind us that “Honor Your Father and Mother” is a commandment that comes with a promise: “that it may go well with you and that you may enjoy long life on the earth.”

I will admit that I started going to The Messiah with my mom because I knew this verse and I didn’t want to get hit by a bus. Somewhere along the way, though, I began to actually like the music. (Appreciate it, even.) And, although I could be imagining things, I think the complain-o-meter on my kids is starting to drop, too.

Because here’s the thing about a Messiah sing-along. It doesn’t matter whether or not you can recognize a treble clef or even sing on key (although it helps if you don’t park small children in the bass section, which we have been known to do). You can go and pretend to sing—and when you do, you’ll get a short course in biblical prophecy, the events surrounding the birth of Christ, and a rafters-raising “Hallelujah” about God’s eternal reign that is worth the price of admission right there. (And Mom, don’t be emailing to tell me that the event is free; I am just trying to make a point.)

Speaking of…I guess the point of this blog (and I really hope my kids are still reading) is that you should give your mom what she wants for Christmas. You might not appreciate her taste. You might not even think it’s a good present. But she will like it. And, chances are (and with a nod to Ephesians 6), it will wind up being good for you, too.