“Wait. Mom. Are you reading your own book? That is just so…sad.”

That was Virginia, more than 10 years ago, when she burst into my bedroom and discovered me sitting up in bed, reading my copy of Praying the Scriptures for Your Children. What Virginia didn’t know was that I was using the book to help shape my prayers for her life. All she could see was her mother doing something that looked, to her teenaged eye, pretty pathetic.

Happily, Virginia is all grown up now, and she doesn’t think it’s strange when I pray. Or when I read my own books. Which is a good thing, since I was at it again yesterday. I was thinking about a friend who is going through a rough patch in her parenting, and I turned to the chapter about parent-child relationships to find some good scripture-prayers. And I came upon this: 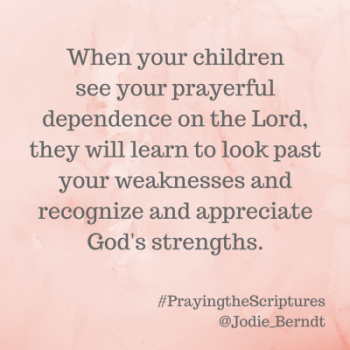 I wrote those words nearly 20 years ago, but honestly? They mean so much more to me now. Because the older I get, the more aware I am of how far I fall short. Of how often I’ve let my kids down. Of how my weaknesses (especially in parenting) don’t seem to be going away.

I remember being a young mom, and wanting so badly to set a good example for my kids. I wanted to be able to change diapers, run carpools, and help with science projects–all while being wise, resourceful, hospitable, encouraging, diligent, creative, generous, faithful, watchful, vigorous, strong, and cheerful. That’s not a list I made up; I read it in Proverbs 31. And if that was God’s standard for an excellent woman, then that’s the mark I wanted to hit.

Hold on, all you Bible scholars out there. I know what you’re going to say. You’re going to tell me that the Proverbs 31 woman was not a real woman, but rather a type of woman. Or that she was really a conglomeration of admirable attributes manifested in the lives of several different women. Or that she was nothing human at all; rather, she was the personification of wisdom, showing us what wisdom might look like, if we could see it in action.

I know all of that. And I knew it, back then. But I’ve always liked clear objectives–targets to shoot for–and the attributes of the Proverbs 31 woman are nothing if not well-defined.

(Literally. Proverbs 31:17 even talks about her fabulous biceps.)

And so I tried. I started by checking off the verses I had covered. Things like sewing clothing and curtains (which I actually did, back then), working late into the night (which seemed both noble and necessary, at the time), and getting up while it was still dark (which was the only time my mom friends could meet up for a run). Verses 19, 18, and 15. Done.

At first, I felt good. I was on a Proverbs 31 roll. How hard could it be, to buckle down and check off the rest?

You know what happened.

I couldn’t do it. Forget about planting a vineyard or bringing food from afar (v. 16 and 14); there were days when I could barely get to the store (and even then it was not anything to be proud of, as I jammed all four kids into one grocery cart and piled boxes of Kraft mac-n-cheese on their heads). And that part about “faithful instruction” (v. 26)? Unless you count that time I got so tired of listening to Hillary and Annesley bicker that I duct-taped them together and made them clean all the toilets one-handed, I’m not sure they learned all that much.

(Simmer down, people. It was only their wrists. And only one arm per girl. I am pretty sure they were…fine.)

The more I tried to be an exemplary mom, the more I became, as my friend Kenzie put it, “the Proverbs 32 woman.” Who is not, as we all know, someone who shows up in the Bible.

If you want to read more (like, if epic mom-fails are your thing), you can pick up the book, but for now I’ll just get to the point and say this:  My weakness was where Jesus came in.

And that’s where he still does.

Because no matter how hard I tried–or how hard I still try–to do everything “right,” there will always be days when I blow it. I will do and say things I regret. And, unlike the Proverbs 31 mother, I will never know what it’s like to have my kids get out of bed in the morning and call me Blessed. (But don’t think that I haven’t thought about picking that as my grandmother name, if and when that time comes.)

But you know what I’ve learned, after 30 years of mom-fails? I’ve learned that the less I rely on my own abilities and the more I rely on Christ–and the more I let my children (even now, as adults) see me depending on him for wisdom, guidance, and strength–the more I will be able to set the only example that’s worth following.

Thank you that we don’t have to be perfect parents–that we don’t even have to be close. Help us, and our children, to rely on your wisdom and grace. And instead of trying to “do good” or “be good” by ourselves, may we look to you and your strength; may we seek your face always. (Psalm 105:4)