So Robbie and I are at it again. We’re working on our relationship, courtesy of The Marriage Course. And we’re taking 30 other couples with us. 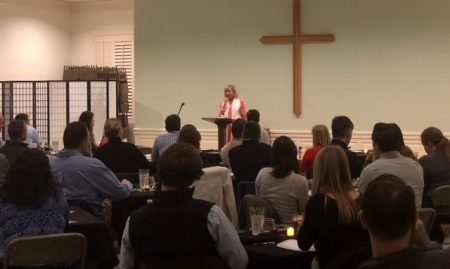 We love this class. The material is developed by the folks at Alpha, and in seven sessions (during which you get to enjoy a candlelit dinner at a table alone with your spouse every week), you cover some of the hottest topics in marriage. Topics like dealing with conflict, handling in-laws, having good sex, and learning how to show–and receive–love in ways that will matter.

(And heads up, Guys: There is literally no “group sharing” time. You get to come, have dinner, and talk just to your wife. #Do-able.)

This week, we dipped into The Art of Communication. Which is how I wound up holding a napkin. 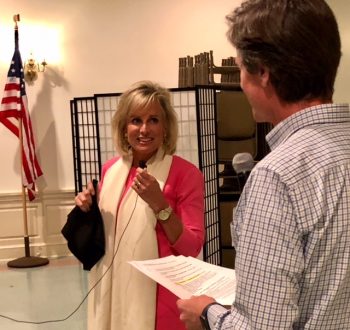 Why, you may ask, was I holding a napkin?

The short answer is that it’s not good to give one spouse a less-forgiving object, such as a hammer, when he or she is trying to make a point.

The longer answer is that in this particular exercise (which is designed to help folks listen better), the person doing the TALKING gets to hold a napkin, while the person doing the LISTENING does not. That way, if either person forgets who’s job is what, they can just look at their hands (“Oh yeah, I don’t have the napkin”) and remember that they are supposed to be Paying Attention.

And Paying Attention, as it turns out, involves steering clear of at least five of the worst convo killers. Wanna know what these bad habits are?

(Ah, no. Did I mention that there are five habits? Turns out I would need, like, 60 steps.)

1. Reassuring.  The Reassurer jumps in before the speaker can finish a sentence, saying things like, “It will all work out,” and even sometimes offering a comparison point, like the woman who called a friend to share the good news of her engagement and, upon learning that the other gal was headed for divorce, said, “It’s okay.  It’s not so bad.  I am probably going to get divorced, too.”  Reassurers act like there is no real problem–which can prevent speakers from expressing any real feelings.

2. Giving advice.  The Advice-Giver is a “fixer.”  Instead of offering empathy, the advice-giver just wants to sort things out.  Men, especially, are guilty of this habit. Sometimes, if the wife has just broken her favorite vase or pitcher, she doesn’t want a broom or a dustpan. She just wants a hug.

(But we girls can be advice-givers, too. I mean, I write a blog.)

3. Intellectualizing.  The Intellectualizer might also be called the Explainer, the Rationalizer, or the Pontificator.  When he or she hears that you’ve had a bad day, the Intellectualizer may jump in with something like: “There’s no doubt that it’s due to a combination of factors.  It’s very humid outside, you are under pressure at work, and given how much we just spent to fix the washing machine, you are probably worried about money.” (Another word for “Intellectualizer” might simply be Buzz Killer. They don’t care how you feel; they just want to be smart.)

4. Going off on a tangent.  This habit probably needs no explanation.  If you’ve confided your feelings to a spouse or a friend, only to have them say, “Really?  You know, that reminds me of the time I…,” you’ve met a Deflector.  People who go off on tangents aren’t really interested in what you are saying; they want to direct the conversation down a new (and to them, more interesting or attractive) path.  Deflectors can be well-intentioned (like when they want to take your mind off of a sadness), but if the end result is that they squelch your freedom to speak or express emotion, it’s a bad habit.

5. Same goes for Interrupters.  Stephen Covey says that most people don’t listen “with the intent to understand; they listen with the intent to reply.” (Ouch.) Interrupters figure out where a person is going with a conversation and then jump on in, either finishing the speaker’s sentence or responding with something that they think is wayyy more witty or interesting. I read where the average person can only go 17 seconds without interrupting someone. Seventeen seconds. Seriously? That sounds long, to me.

(Like, I remember one time on a car trip when I decided to be quiet and just let Robbie talk. After a couple of minutes, he asked if I was okay.)

Anyhow. Just knowing what the bad habits are is supposed to help you listen better–and after teaching this course six times, Robbie and I are starting to get there. What the habits don’t help with, though, is the age-old Mars/Venus divide. Like, when it’s Valentine’s Day, and a woman says she does not need flowers: 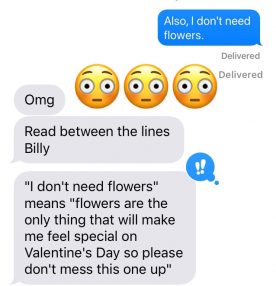 Yeah. I’ll report back if the folks at The Marriage Course ever discover a way for a man to fully comprehend the female brain.

(And BTW, if you want to find a Marriage Course in your area, or even start one at your church or for your friend group, they make it SUPER EASY to do. Click here to get the full scoop.)