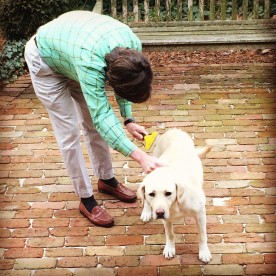 Some women love it when their man shows up with jewelry, or maybe tickets to a Broadway show.  Me, I’m more of a “hair of the dog” kind of gal.  As in, literally, the hair of the dog.

As in:  Get it out of here and I will love you forever.

Now, I’m not knocking new baubles or an evening out.  (Seriously.  I’m not.  Sometimes Robbie reads these blogs, and I’d hate for him to get the wrong impression.)  But anyone familiar with Gary Chapman’s love languages will know what I am talking about when I say that Acts of Service is a big deal to me.  And I am confident that, on Maslow’s lesser-known Hierarchy of Services, “Getting Rid of Dog Hair” ranks right there at the top.

But this particular act of service is, at least in our house, a quixotic endeavor.  As you know if you saw them in their Christmas finery, we have two dogs:   Khaki (a fat, stubborn Lab) and Max (a scrawny, good-natured Golden).  Between the two of them, they probably shed about 17 pounds of hair per day.  I am not, by nature or nurture, much of a “dog person,” but I don’t think I am being mean or unfair when I say that this habit is not attractive.

Because here’s the thing. It doesn’t matter how often I vacuum or how vigorously Robbie furminates (which is, I believe, an actual verb), there is no way we can vanquish the dog hair completely.  To the casual observer, the house may look clean (and if I knew you were coming over, I would put the dogs in the laundry room and run a lint brush over the couch that Khaki probably thinks is named “Get off!”), but it would be a temporary illusion.  Look closely (or, heaven forbid, actually pet one of the dogs) and you’ll see the harvest.

I mean it.  Sometimes you look down and you realize that you are covered in it, and that you have to go back upstairs and change before you go out in public.  Sometimes, it’s a little more hidden; only you know what’s lurking on the grill under the refrigerator.  And sometimes, it’s just that one tiny little piece and you pluck it off of your black pants and you think you are good…until you spot another one.

I’ll be honest.  I get depressed about the dog hair.  And I would get depressed about my sin, too – except for this one (a-hem) saving grace:  God has taken care of it for me.  That’s basically the message in Paul’s letter to the Galatians, a group of people who thought they had to earn God’s love and acceptance by following all the Jewish laws and religious customs.  “Not so!” Paul says (and I am paraphrasing here).  “It’s not about what you do.  It’s about what God already did.”  God knew we couldn’t do it on our own, so he sent Jesus (and you gotta love the term Paul uses) to “rescue” us.

I’d go on, except that Tim Keller makes the case for grace much better in his book, Galatians for You. 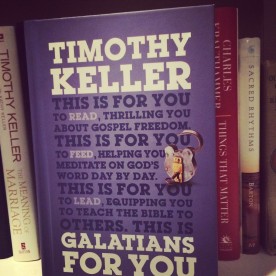 “The average person on the street believes that a Christian is someone who follows Christ’s teaching and example,” Keller writes.  “But Paul implies that’s impossible. After all, you don’t rescue people unless they are in a lost state and a helpless condition!  Imagine you see a drowning woman.  It doesn’t help her at all if you throw her a manual on how to swim.  You don’t throw her some teaching – you throw her a rope.”

I don’t know if Keller is a dog person or not (he probably is, because he seems well-adjusted), but I am sure he would agree with me on this:  If we spend our lives trying to live up to some sort of “moral cleanliness” – if we vacuum and furminate until we think our house is “pretty clean” (or at least “cleaner” than so-and-so’s) – we’re doomed to a life marked by guilt, insecurity, and exhaustion.  We won’t be able to do it.

If, on the other hand, we turn the dog hair of our sin over to God, trusting in him as the Ultimate Furminator, we are golden.  We can grab hold of the rope and relax in the security of God’s unmerited favor and love, knowing that nothing we do (or don’t do) will ever change the fact that he is absolutely crazy about us.

God is crazy about us.

Dog hair and all.

(Bonus material:  You really can’t get rid of your own sin.  And trust me on this one:  If you have a Lab, you will never get rid of your dog hair.  You will have to move.  But if you have a spare 35 bucks and you want to try your hand at furminating, or if Acts of Service is your primary love language and you have a husband who doesn’t mind tilting at windmills just to show how much he cares, click here.)