(This is the last in a series of three posts from our trip to the Holy Land. To read the first two, click here and here. And if Insights from Israel isn’t your thing, check back next week, when I hope to write about what we can do with a Downcast Soul. Which is not, I realize, the most cheery promo. But hey. It’s been really cold for a really long time, and maybe somebody out there needs a little pick-me-up. I know I do!) 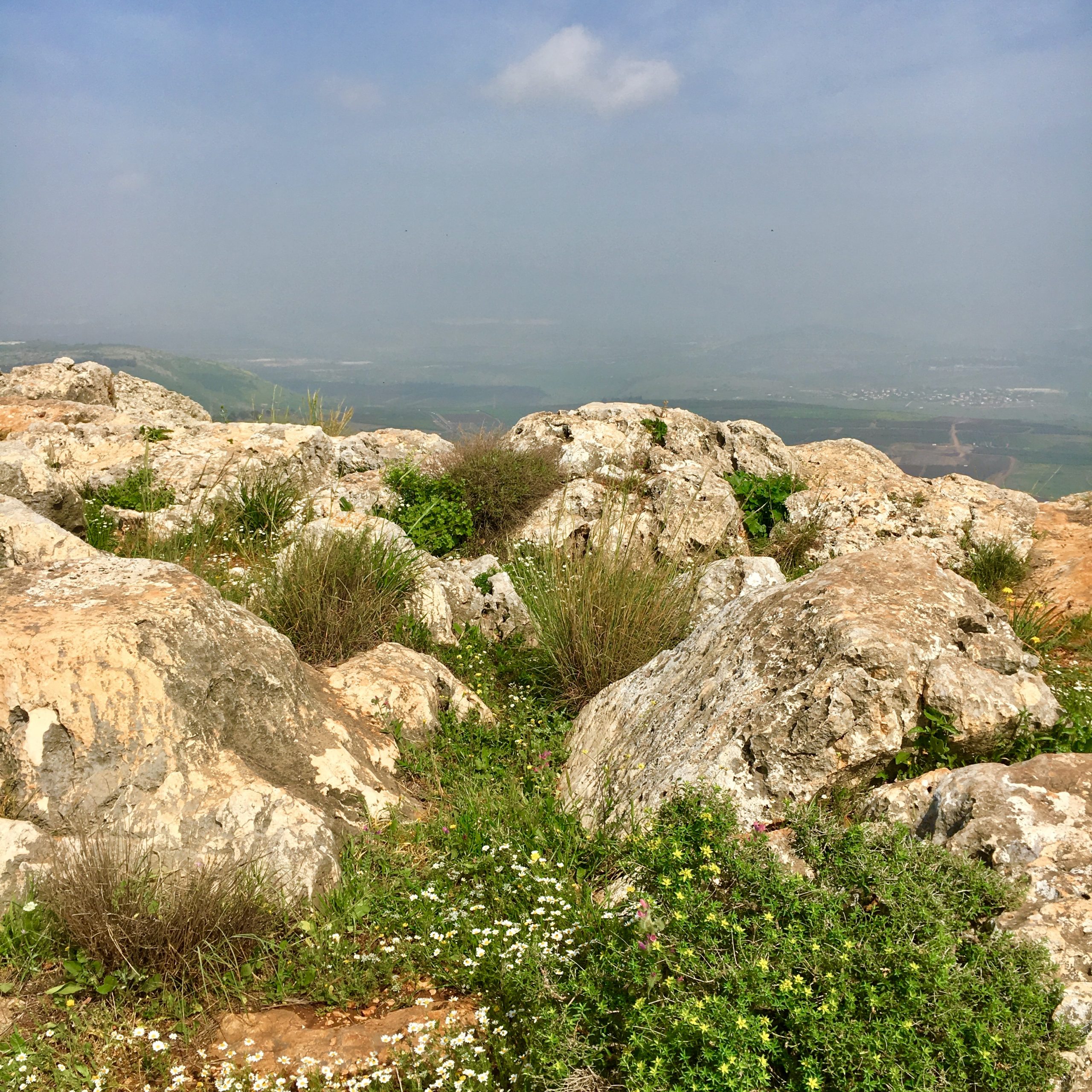 Out of these stones God can raise up children for Abraham. (Matthew 3:9)

Which of you, if your son asks for bread, will give him a stone? (Matthew 7:9)

Each of these quotes is from Jesus. I’m not going to get into why he said what he did in each instance (click the links, if you’re curious), but if you are even half awake, you’ll note that there’s a common word in each line.

Which are, actually, everywhere in Israel. As in…everywhere. We walked on stones, sat on stones, and slept in hotels made of stones. One gal in our group even had her face rubbed with stones (which was not, at it turned out, as beneficial to the complexion as advertised).

So plentiful are Israel’s stones that, in lieu of flowers, people put rocks on the graves of their loved ones: 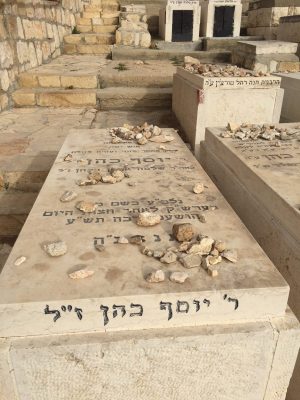 I know that the Bible talks a lot about stones (and I love how Ezekiel describes God removing our heart of stone and replacing it with with a new one, made of flesh), but I’d never really thought about why. But then, as we found ourselves tramping all over the country, surrounded by rocks and stones of all sizes, a lightbulb went off. I think Jesus used stones in his stories because they were…there.

(It’s like me, driving home a point to my kids: “If I’d wanted someone who would NOT take out the trash, I would have asked the pile of DOG HAIR to do it.” You work with what’s handy.)

But anyhow. I don’t think their ubiquitousness is the only reason God focused on stones. I think he also did it because (gasp) Jesus was a stonemason. Which is something I learned from Kathie Lee Gifford’s new book, The Rock, the Road, and the Rabbi. 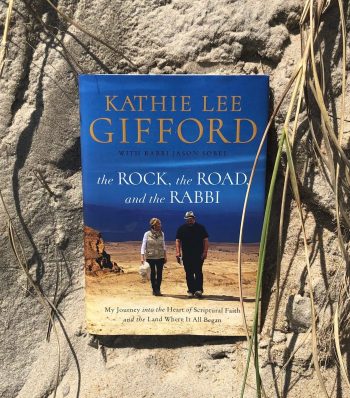 I will confess that when I first read that claim in her book, I was like: Kathie, girl. I love you and all. But I think maybe you’ve been knocking back too much of that wine you always promote.

I mean, if she were right, did that mean that Josh McDowell would have to go back and re-do the book that (along with late-night pitchers of beer and baskets of pretzels) served as the underpinning of my evangelism strategy in college? I built half my presentation around the info in More than a Carpenter. Would More than a Stonemason have the same apologetic impact?

But then I dug deeper and realized that Kathie Lee Gifford was right. She was right, in fact, about a lot of cool things in the book (which is, incidentally, a zillion times better than the Baedecker’s Guide I used on my last trip to Israel). And when this guy… 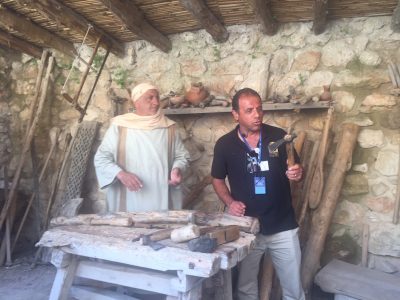 …told our tour group that Jesus was not, in fact, a carpenter but a stonemason, I sat there looking more than a little pleased with myself.

“Oh yes,” I said, nodding my head. “The word that’s translated ‘carpenter’ in the passages that talk about what Jesus did for a living is actually the Greek word tektōn. It means ‘builder.’ And since there were only rocks to build stuff out of, a more accurate description of Jesus’s job would be ‘stonemason.'”

The group looked at me sideways, like they knew there was no way I knew that. I had to ‘fess up. “It’s true,” I admitted. “I read it in Kathie Lee’s book.”

“Ahhhh,” the group said, as the light collectively dawned. “That is good. We love Kathie Lee.”

But I think there is even a third reason–the main reason–why Jesus kept pointing to stones. It’s because (and I realize that this might be kind of a “duh”) he is the Stone.

That last reference–the one about the living Lord who is our Rock and our Savior–is from Psalm 18:46. It’s a phrase echoed in the New Testament, and (stay with me here) it has incredible implications for us. Look at what Peter says about what happens when we come to Jesus:

As you come to him, the living Stone—rejected by humans but chosen by God and precious to him—you also, like living stones, are being built into a spiritual house to be a holy priesthood…a chosen people, a royal priesthood, a holy nation, God’s special possession, that you may declare the praises of him who called you out of darkness into his wonderful light.

That’s kind of a mouthful. And I’ll just go ahead and tell you that I’ve probably read those words fifty times. But not once have I stopped to think of myself as a “living stone.” Not until our tour guides, Tony and Andre, told us what believers in Israel call themselves.

You guessed it. Living Stones.

Tony and Andre are Palestinians who’ve trusted Jesus as Lord. Before this trip, I would have called them “Arab Christians.”

They introduced us to some Jews who had also met Christ. I would have called them “Messianic Believers.”

Those labels, I guess, might still fit. But I much prefer our new friends’ self-chosen name, and I want to wear it myself. I want to be a “living stone” who knows that she has been chosen by God. That she is his special possession. And that it is her privilege to declare the praises of him who called her out of darkness and into his wonderful light.

We come to you, grateful for the Living Stone that is Jesus. Shape us into a house where Your Spirit can dwell. Remind us (especially during times of discouragement or doubt) that we are chosen. That we are treasured in your sight. And that our job–our privilege–is to praise you.

We ask these things in the name of the One who is both Rock and Redeemer, Savior and Lord.

Remember the warning Jesus gave his disciples in Matthew 18:6, the one where he said that if anyone caused a believer to stumble, it would be better to have a large millstone hung around their neck and to be drowned in the depths of the sea?

Yeah, well. We saw a bunch of old millstones in Capernaum, Christ’s adopted hometown. And let me tell you: Those things are NOT small. Made me think twice about the whole blogging thing. Would you please pray that I will only write what is helpful and true, rather than the stuff (and I’ve got plenty of it, in my head) that makes people stumble? 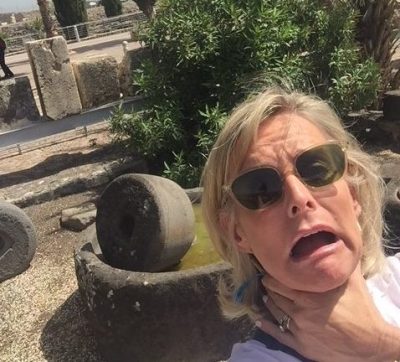