Jonas may have dumped 42 inches of the white stuff on West Virginia and 30 in New York, but here in Virginia Beach (where we had accumulations of “up to an inch!”) we had our own problems. Roads turned icy, schools shut down, and the birds outside my window huddled on the rooftop, daring each other to jump. 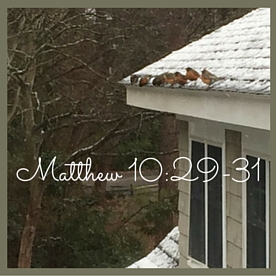 Seriously. They would hop to the edge, look down, and then egg each other on, like a flock of middle school boys. “You first.”

Not being all that up on my ornithology, I don’t know how much sleet hampers a bird’s ability to fly, but from the looks of these guys, it must be a lot. Either that, or they just forgot who they were in the storm.

I get that. And maybe you do, too. When life turns cold and nasty, it can be easy to forget who we are, or how much we are loved. Which is maybe why God put in that part about the birds, when he sent his disciples out into a world that would hate them. “Are not two sparrows sold for a penny?” Jesus asked. “Yet not one of them will fall to the ground apart from the will of your Father. And even the very hairs of your head are numbered. So don’t be afraid; you are worth more than many sparrows.” (Matthew 10:29-31)

If you feel snowed under by problems or persecution today (whether it’s one inch of them or 42!), why not use this passage as a springboard for prayer? Just put your name (or the name of someone you love) in the blanks, and remember that no matter how gloomy the forecast is, God is still in control.