By the skin of your teeth.

Out of the mouths of babes.

He’s a wolf in sheep’s clothing.

Who came up with these phrases? According to a random sample of Americans (well, okay, according to two people in my family room), these familiar words likely originated with 1) John Wayne, 2) Shakespeare, and 3) Aesop.

These everyday sayings–and about a zillion others like them–come straight out of the Bible. They crop up in movies, music, and everyday conversations. They are God’s Word, hidden in plain sight. Makes it easy to see why one of my favorite presidents, the guy with the big stick, said this: 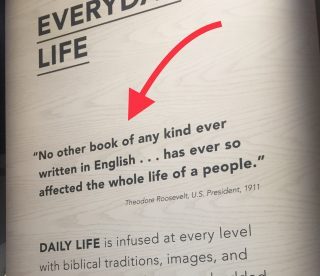 Teddy was right. And I think he would love our nation’s newest treasure, the Museum of the Bible, which opened less than two months ago in Washington, D.C. If you’re making a bucket list for 2018, put this place on it.

If you want the official (and professionally produced) Top Ten reasons to visit the Museum, click here.

Or, if you want just five from an everyday tourist, I’ll give you my own.

Keep in mind, though, that Robbie and I only got to spend a couple of hours in the museum. People who are way more organized than we are say you actually need “nine, eight-hour days” to see the whole thing. Clearly, we missed gobs of the good stuff. But here are five things we liked:

Reason #5 is the Technology.

I’m not the biggest museum girl (I would generally rather paint a bad picture than look at a good one), so I really appreciated the way that the MOTB draws guests in and invites them to engage with Scripture. In one room, for instance, you can write a word to describe how the Bible makes you feel… 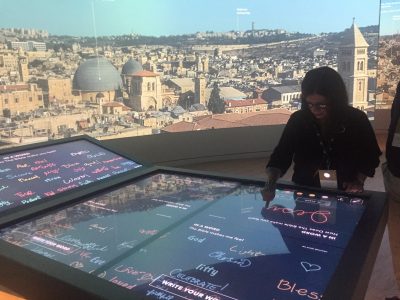 …and then it shows up on the wall with everyone else’s. (I don’t know who wrote the word “Mom,” but I love them.) 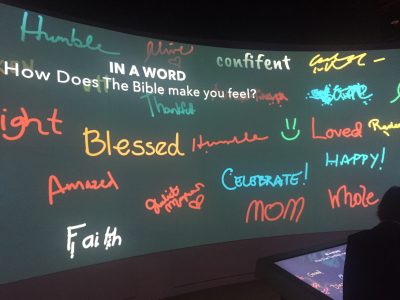 And I know the museum Big Wigs have come under fire for not being “evangelical enough” in their presentation, but honestly? I loved how they worked to make everyone feel welcome. When I logged on (if that’s the right term) to a screen to do one of their surveys, this was question #3: 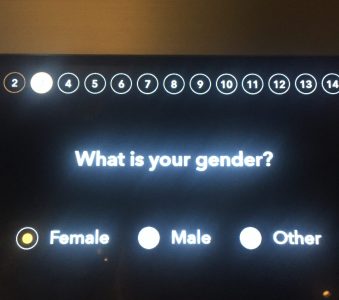 (Not being an “Other,” I could be wrong; there’s a lot about this particular topic that I don’t understand. But if I were an “Other,” I’m pretty sure I would like to have a Bible person ask and value my opinion, instead of leaving me out of their survey.)

Reason #4 is the Nazareth Immersion.

Back when our children were little, we took them to Vegas. (Don’t ask.) Spotting the fake Eiffel Tower, we made a beeline for the ride and ordered up hot cocoas all around, at the top. We let our kids think (and I am not proud of this) that they were in Paris. I figure we saved about $10,000, and it was at least seven years before any of them wised up and asked to see the real thing.

If you’ve got kids, you’ll want to bring them to the MOTB Nazareth. Having been to the actual Holy Land twice, I can tell you that this village is a pretty good knock off. It looks and sounds a lot like Nazareth probably did, back in Jesus’ day, and you can ask the friendly natives any question you want. Like, I wondered how long it took this gal to make dinner: 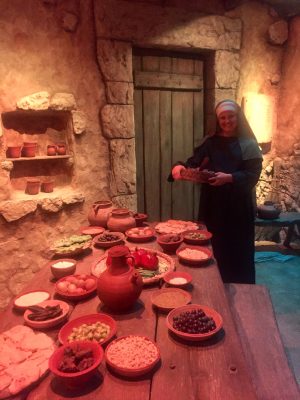 Reason #3 is the World Stage Theater.

Robbie and I were thrilled to visit the museum during the Amazing Grace run (the Broadway musical moves on after January 7). We weren’t allowed to take pix during the show, but I did snap some earlier in the day, when we got to hear the INCREDIBLE Wintley Phipps sing on the same stage. I don’t know who or what will be playing when you go, but be sure to check it out because, like everything else in the EIGHT STORY building, the World Stage Theater is state-of-the-art and will not disappoint. 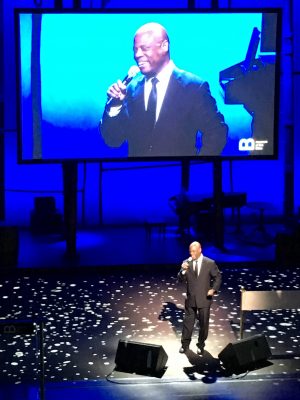 (And it’s time, I think, for an Insider Tip. Don’t show up at the museum and expect to waltz right on in. Do some Advance Recon and get your tickets online. That way, you can show up at a pre-assigned time, without waiting/freezing outside.)

Reason #2 is the Bible itself.

Everywhere you look in the MOTB, you feel the life-shaping presence of Scripture. Sometimes it’s overt, like when you see the Bible’s influence on science, education, or fashion: 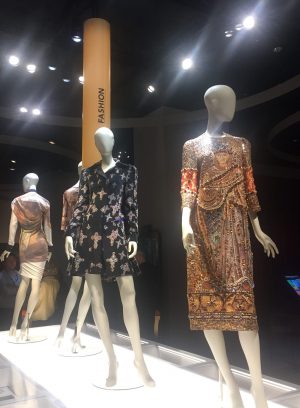 Or when you consider how Scripture permeates art, as described by Vincent van Gogh: 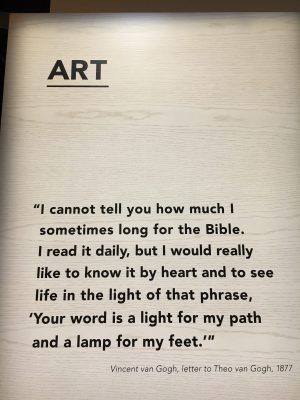 And, of course, music: 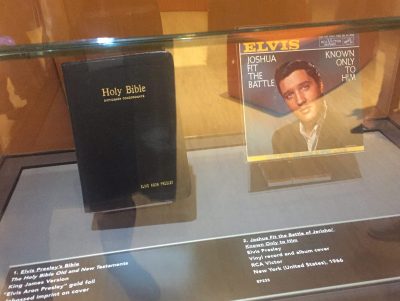 (And yes, that is Elvis’s actual Bible. He said he “believed in it” and that “I don’t believe I’d sing the way I do if God hadn’t wanted me to.” I’m not gonna argue.)

Hebrews 4:12 says that the word of God is living and active. As you experience the museum, you get the idea that this verse really is true. Whether you’re looking at artifacts (Robbie liked the slingshot stones, c. 701 BCE, that authenticate Sennacherib’s campaign to destroy Israel and Judah), perusing the Dead Sea Scrolls (they have gigantic mock ups of Isaiah’s writing), or just passing by any one of the silent-yet-powerful banners, you don’t get the sense that you’re looking at history. You get the sense that you are surrounded by–embraced by–a force that’s alive. 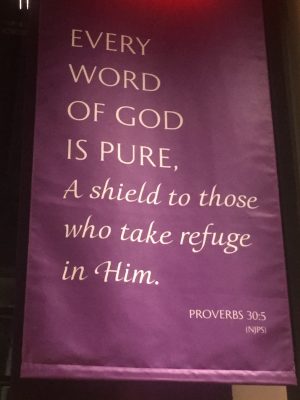 And finally, Reason #1 why you should visit the Museum of the Bible is the Stuff You Can’t Plan.

If you do any research before your trip (and I didn’t), they’ll tell you not to miss things like the Washington Revelations, which is where you strap yourself into a “flying theater” and soar high over the nation’s capital, taking in all of the ways that the Bible marks our landmarks and buildings. I heard that exhibit was cool (and I will see it next time), but I doubt it’s the one I’d like best. The thing I liked best (and that Robbie did, too) was a panoramic, 12-minute movie we did not mean to see.

Robbie and I were looking for an exit when we sort of stumbled upon a theater door. The friendly docent ushered us in, explaining that the show was “just starting.” We found two open seats in the dark and plopped down, having no idea what we were about to watch but delighted, after two hours of touring, to be off of our feet.

The movie was animated. I have no idea when cartoons got so good, but by the end of the story–which was about how the early church spread–I had pretty much lost it. As in, “Get me a Kleenex; this is gonna be ugly.” I was a mess.

I can’t explain it, but even now, looking back, the picture of an aging John (the disciple Jesus loved, the last one to die) sitting there in his rocky prison, stooped in the dim light, intent upon writing his scrolls…it just undoes me. John had to know that what he was writing was powerful; did he have any idea that, 2,000 years later, you and I would be reading his words?

Just buckle up, if you accidentally wander into that theater. That’s all I can say.

So there you have them. Five things I liked. And truly, there are at least 55 more. Like the giant quote cylinder that showcases the answers to my little “Who said that?” quiz: 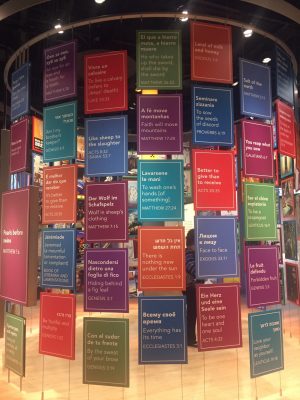 And the “wolf in sheep’s clothing” slips into the picture in Matthew 7:15. 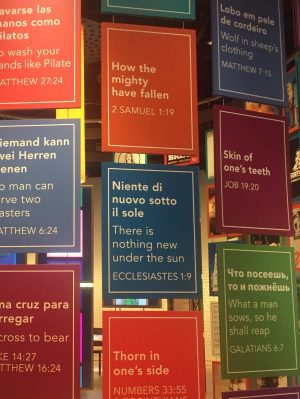